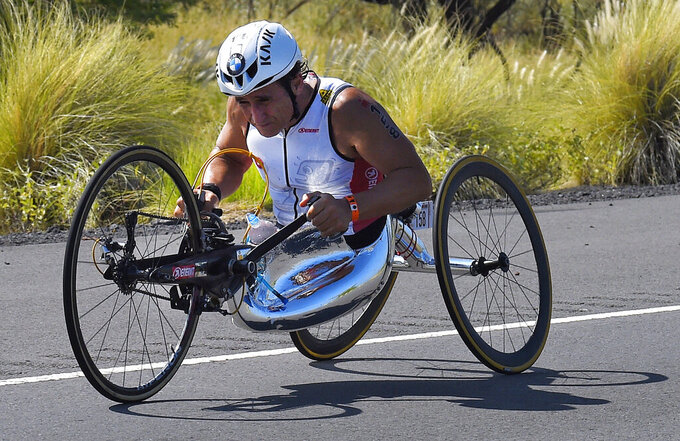 FILE - In this Saturday, Oct. 10, 2015 file photo, Alex Zanardi, of Italy, rides during the cycling portion of the Ironman World Championship Triathlon, in Kailua-Kona, Hawaii. Race car driver turned Paralympic champion Alex Zanardi has been seriously injured again. Police tell The Associated Press that Zanardi was transported by helicopter to a hospital in Siena following a road accident near the Tuscan town of Pienza during a national race for Paralympic athletes on handbikes. The 53-year-old Zanardi had both of his legs amputated following a horrific crash during a 2001 CART race in Germany. He was a two-time CART champion. (AP Photo/Mark J. Terrill, File)

ROME (AP) — Alex Zanardi, the Italian race car champion who transitioned into a gold medalist Paralympian after losing both of his legs, was seriously injured in a handbike race on Friday.

Zanardi was transported by helicopter to Santa Maria alle Scotte hospital in Siena following a crash near the Tuscan town of Pienza during a national race for Paralympic athletes, police told The Associated Press.

A medical bulletin from the hospital said Zanardi underwent “a delicate neurosurgery operation” due to “severe cranial trauma."

The surgery lasted about three hours, after which Zanardi was moved to the intensive care unit.

Italian Premier Giuseppe Conte tweeted: “You’ve never given up and with your extraordinary strength within you’ve overcome a thousand troubles. Forza Alex Zanardi. Don’t give up. All of Italy is with you.”

A Carabinieri police official in Montepulciano said the incident involved a “heavy vehicle."

Local TV at the scene of the crash showed what was apparently Zanardi’s handbike lying on its side and missing two of its three wheels. A large truck pulling a semitrailer appeared parked on the road ahead.

“It happened on a slightly downhill straightaway just before a slight curve in the road,” national team coach Mario Valentini, who was following the race, told La Repubblica Florence. “Alex veered slightly into the oncoming lane just when a truck came. (The truck) tried to swerve but couldn't avoid the crash."

Prosecutors in Siena opened a criminal investigation into the incident and into the race's organization.

Repubblica said Zanardi remained conscious until medical personnel arrived, and he was breathing by himself.

“Twenty minutes passed from the time of the accident to when the medical personnel arrived. It took some time to load him (into the ambulance). His wife helped. After the accident he was talking,” Valentini added in another interview with local media.

Valentini said he was not an eyewitness to the accident but arrived at the scene immediately afterward.

“It was a sunny day and everyone was happy. We were 20 kilometers (12 miles) from (the finish line) in Montalcino," Valentini said. "The truck didn’t make a mistake. Alex made the mistake.”

The coach added that Zanardi's helmet came off during the crash.

Racing great Mario Andretti tweeted, “I am so anxious and frightened about Alex Zanardi that I’m holding my breath. I am his fan. I am his friend. Please do what I’m doing and pray pray (for) this wonderful man.”

The 53-year-old Zanardi won two championships in CART In the United States before a brief move to Formula One. He returned to America and was racing in Germany in a CART event in 2001 when both of his legs were severed in a horrific accident the weekend after the Sept. 11 terrorist attacks. CART raced only because the series was already in Germany at the time of the attacks and could not return to the U.S.

During his recovery, Zanardi designed his own prosthetics — he jokes he made himself taller — and learned to walk again. He then turned his attention to hand cycling and developed into one of the most accomplished athletes in the world. He won four gold medals and two silvers at the 2012 and 2016 Paralympics, competed in the New York City Marathon and set an Ironman record.

His spirit, will, and determination gave the beloved Italian a larger than life persona. When he returned to the U.S. in 2019 to compete for BMW at the Rolex 24 of Daytona without his prosthetics, he was the most revered driver in a field that included F1 champion Fernando Alonso.

Drivers from around the world sought out Zanardi for photographs and were transfixed as he told elaborate, often embellished, tales of his adventures in the nearly two decades since many had seen him.

Noted for his infectious smile and fanciful storytelling, Zanardi proved time and again to be among the most determined people his peers have ever known.

Andrew Dampf is at https://twitter.com/AndrewDampf