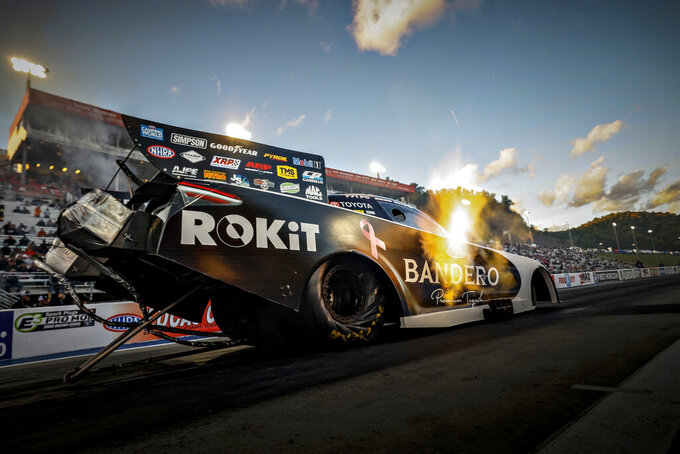 In this photo provided by the NHRA, Alexis DeJoria drives in Funny Car qualifying Saturday, Oct. 16, 2021, at the NHRA Thunder Valley Nationals drag races at Bristol Dragway in Bristol, Tenn. (NHRA via AP)

“I was hungry and I know that feeling,” DeJoria said. “I was just happy to be there and I believed I was going to win. It’s one of the biggest wins of my career. Coming back after two years off, getting to work with my mentor and friend (Del Worsham), being able to do this, it’s huge. It’s just been a roller-coaster and it takes a toll on you. It’s very humbling, but I was just ready to win.”

Mike Salinas won in Top Fuel and Angelle Sampey in Pro Stock Motorcycle in the fifth of seven events in the Countdown to the Championship playoffs.

Salinas drove to his second straight victory at Bristol Dragway, topping points leader Steve Torrence with a 3.854 at 245.05. He has three career victories.