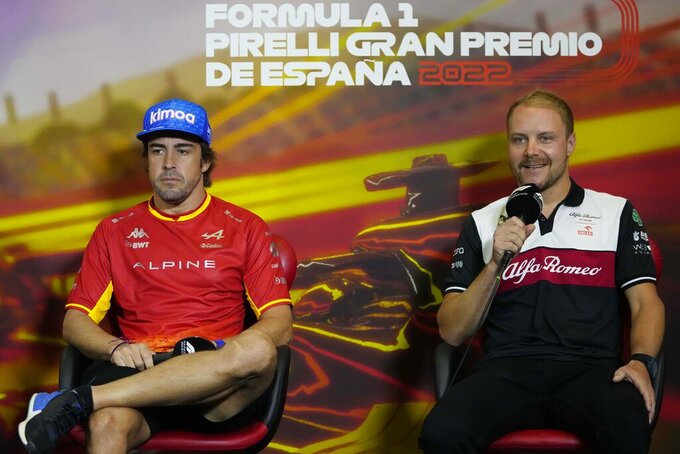 Alpine driver Fernando Alonso of Spain, left, flanked by Alfa Romeo driver Valtteri Bottas of Finland address to the media during a conference at the Barcelona Catalunya racetrack in Montmelo, Spain, Friday, May 20, 2022. The Formula One race will be held on Sunday. (AP Photo/Manu Fernandez)

MONTMELÓ, Spain (AP) — Two-time Formula One champion Fernando Alonso slammed the FIA on Friday at his home grand prix, accusing race stewards of incompetence and saying one of the directors lacks the professionalism for the role.

The Spaniard was infuriated two weeks ago at the Miami Grand Prix after he was penalized late in the race while running in contention to score points. Alonso claimed Friday at the Spanish Grand Prix that his Alpine team submitted evidence to have his penalty overturned, but the stewards had already made their decision and were done working for the day.

“We believe that it was very unfair and it was just incompetence from the stewards — they were not very professional,” Alonso said. “We arrived after the race with all the proof ... and they were just packing up. They were not even in the room. We showed them all the data, they said, ‘Give us five minutes,’ and then they found themselves with their hands tied, probably because they issued already the penalty and they didn’t know how to get back from that document.

“It is something that should not happen in Formula One, with professionalism and standards Formula One has right now.”

Alonso was twice penalized in Miami, but Alpine protested the late punishment he was handed for leaving the track and gaining position. The team insists he gave back the time gained and had data to prove its claim.

Alonso's criticism comes amid tension between race management done by FIA, the governing body for F1, and teams that stems from last season's finale in Abu Dhabi. The championship was controversially won by Max Verstappen following a sequence of events set in motion by then-race director Michael Masi.

Masi broke from protocol following a late caution and made rulings that allowed Verstappen to beat Lewis Hamilton for the championship by winning a race Hamilton had dominated until Masi's decisions. The FIA conducted an offseason review of the sequence and Masi was removed from the role ahead of this season.

Masi has been replaced by Niels Wittich and Eduardo Freitas, as well as a new remote system that provides additional in-race support to the stewards.

Alonso on Friday said “for sure not” when asked if race control has improved with the changes. He also took aim at Wittich, who has been race director at every event this season. Freitas is making his debut as an F1 race director in Barcelona this weekend.

“You need to have some knowledge about racing before being a race director or trying to monitor a race,” Alonso said. “And I don’t think that knowledge is in place at the moment. I know there is a new race director here. I think Freitas has a lot more experience with WEC and with other categories at the top level. And I think that will already improve things."

Alonso was later seen in the paddock at the Barcelona-Catalunya Circuit sitting down to speak with FIA president Mohammed ben Sulayem, who was elected the week after last year's Abu Dhabi race.

Alonso ran afoul of the stewards again in Montmeló during the first practice session for the Spanish GP on Friday. Race officials reprimanded the Spaniard for going slow on the racing line, which forced Hamilton to take evasive action.

Wittich has race director experience in DTM, Formula 2 and Formula 3. He's had supporting roles at F1 races ahead of his promotion this season. Freitas has been the World Endurance Championship’s race director and officiated GT and touring car racing.

The drivers have been at odds with Wittich for more than a month after the race director issued a ban on wearing jewelry and and non-compliant underwear while in the car. Hamilton has been given a two-race waiver to compete with piercings the seven-time champion says can only be surgically removed and he protested the ban in Miami by arriving at the track wearing as much jewelry as he could fit; Sebastian Vettel, meanwhile, wore a pair of underwear over his firesuit as he walked through the paddock in his own protest.