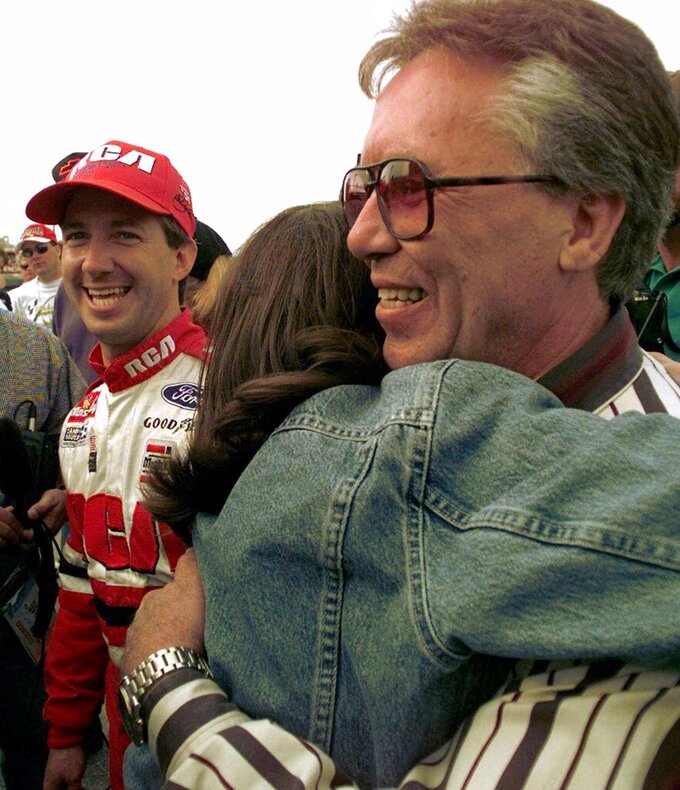 FILE - In this April 25, 1997, file photo, John Andretti, left, grins as his wife Nancy hugs his father Aldo after the younger Andretti won the pole for the Winston 500 at Talladega Superspeedway in Talladega, Ala. Mario Andretti feels the same pain as so many others these days. His wife died two years ago, long before the pandemic. And his beloved nephew John lost a brutal battle with colon cancer. But then COVID-19 claimed his twin brother Aldo and one of the greatest racers of all time is not immune from the loneliness and depression sweeping the world. (AP Photo/Dave Martin, File) 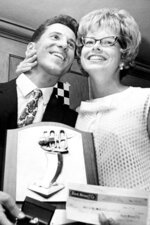 Mario Andretti is loneliest at night, when he's home alone in his sprawling Pennsylvania mansion, and there's no one to talk to but Gonzo, his 34-year-old Amazon parrot.

One of the greatest racers of all time is struggling, not unlike so many people around the world during this pandemic that has devastated families and claimed more than 3 million lives.

His sister and his wife died months apart in 2018 and maybe those back-to-back losses, and the hardness toward death that is inherent to racers accustomed to losing fellow competitors, should have prepared Andretti for 2020.

But the blows were just too deep. Just too cruel.

His beloved nephew John Andretti lost his three-year fight with colon cancer in early 2020, a death that shook the family. It came about six weeks before the pandemic brought the world to a standstill and Andretti suddenly had nowhere to go.

There is no bigger star at a racetrack than Mario Andretti, the only driver to win the Formula One championship, the Indianapolis 500 and the Daytona 500. And when all the racetracks were closed, his world became very, very small.

“Before COVID, at least he was getting out, doing stuff he liked, and then he lost all his endorsements and he was just sitting at home and he’s there by himself. He needs something to do at the racetrack to feel alive,” said Michael Andretti, gesturing across the Andretti Autosport hospitality center to his 81-year-old masked father mingling with guests at IndyCar's season-opening race.

The call Andretti never prepared himself for came Dec. 30 when his twin brother died of complications from COVID-19. Both Aldo Andretti and his wife had contracted the virus; she recovered and went home but he remained hospitalized, refused to be placed on a ventilator and died.

“Aldo Andretti, my loving twin brother, my partner in crime and my faithful best friend every day of my life was called to heaven last night. Half of me went with him. There is no eloquence. I’m shaken to my core,” Andretti tweeted.

Andretti said he and grandson Marco had traveled together to Indianapolis on Dec. 7 for physicals and visited with Aldo, found him “jovial, same as ever,” and 23 days later he was dead.

In a nearly hourlong interview at Barber Motorsports Park with The Associated Press, Andretti talked about emigrating from Italy to Nazareth, Pennsylvania, in 1955 on a Thursday night. They were World War II children who had grown up sharing a bed, whispering in the dark about Ferrari, Nino Farina and Alberto Ascari, wondering if the Andretti boys might someday have their own chance to be famous race car drivers.

Four days after arriving in the U.S. they saw the bright lights of Nazareth Speedway, where a modified race was being held. The brothers were 17, four years away from the legal age to compete, without a car but “driven by a passion and a love, and as a kid you are allowed to have your dreams," he said.

By 1959, they had one car built for the two of them to share. Aldo won the coin flip and the right to enter the first race. He won.

The Andretti boys raced all year without telling their father. In the season finale, Aldo flipped his car and spent four days in a coma. A decade later, Mario won the only Indy 500 for motorsports' most famed family; three months later, at a dirt track in Iowa, Aldo was hospitalized following a horrific accident.

Mario boarded Andy Granatelli's private plane, flew to Iowa and told Aldo that Aldo was never racing again. They'd buy a tire shop, and Aldo would become a businessman and leave the racing to the rest of the Andretti family.

“I told him right there in the hospital, ‘There is a black cloud over your head and if something is in front of you, you will hit it,’” Andretti said. “But he couldn't just walk away from racing. He needed goals and he didn't want a handout. So he had to have something to do.”

It's no different for Andretti himself, who refuses to come to the racetrack just to hang out. His son Michael runs Andretti Autosport and grandson Marco decided in January he doesn't want to run full-time IndyCar anymore.

When IndyCar resumed last June, Andretti still had something to do at the track as the driver of the popular “Fastest Seat in Sports” program that pairs him with a celebrity, dignitary or influencer in a two-seater that leads the field to green before each race. The program had been sponsored by Honda but ended in an embarrassing fiasco at last season's finale when a participant intimated to Andretti that it was his final weekend as driver.

In reality, Honda was ending its sponsorship of the program that also includes pre-race rides for VIPs. Michael Andretti and his sales team spent months seeking a company willing to continue the two-seater program, and Ruoff Mortgage debuted at Barber as the new sponsor.

Ruoff Mortgage has been an Andretti Autosport partner in the past, debuting in 2017 on Takuma Sato's Indianapolis 500 winning car.

“I made a joke that I was the sponsor for my dad," Michael Andretti said.

It's not clear if Andretti Autosport moved money from its budget to the two-seater program, but Michael Andretti said his father “won't come here unless he has a reason to come here and I know that I really tried hard to find something for that program.”

Mario Andretti went directly from Barber to St. Petersburg, Florida, site of this weekend's race. His relationship with Michael has never been closer, he said. His other son, Jeff, lives in Arizona. At home in Pennsylvania, his nearby daughter, Barbie, constantly ensures he's got enough to eat. Marco lives next door and sees him most often, and in this new world of Zoom, not a day goes by without an interview request.

At night, it's just him and Gonzo. He said he talks to the bird and the bird talks back. He arrived in Nazareth 66 years ago, met wife Dee Ann there, loves his home and has no plans to leave.

“This is my life. I cannot imagine any other life, being satisfied with any other life that did not include racing. I never had any Plan B. So on I go.”