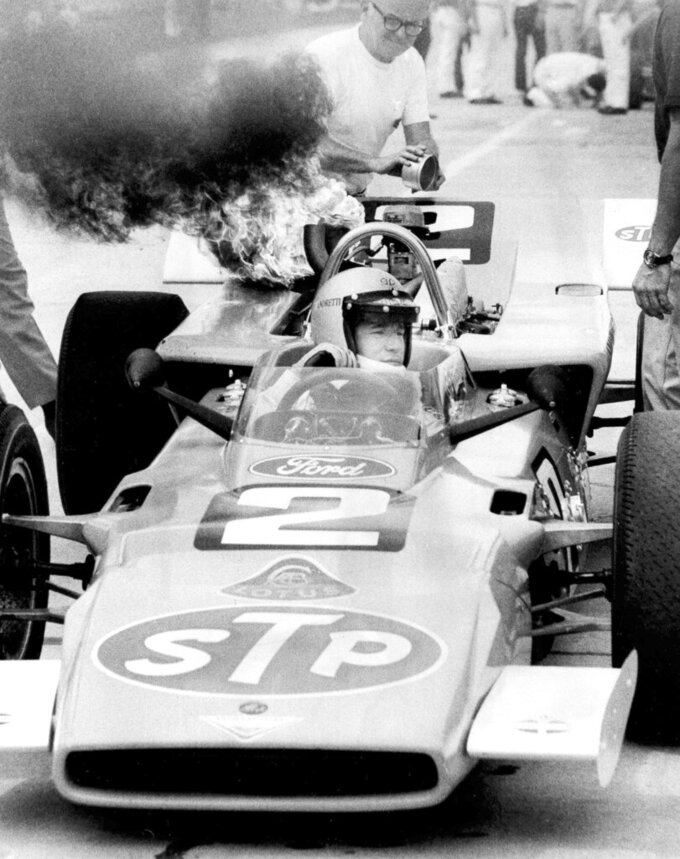 FILE - In this May 8, 1969 file photo, Mario Andretti sits calmly in his car as his crew works to put out a fire that blistered some paint, at the Indianapolis Motor Speedway in Indianapolis. Mario Andretti sees the reminders of 1969 everywhere he turns these days. His face, his race-car number, even that familiar STP logo appear on an endless array of memorabilia at this year’s Indianapolis 500. He has own street, his own badge and even his own store. It’s all part of the golden anniversary of the first and only 500 win for one of the greatest drivers in racing history. (AP Photo/File)

His face, his race car number, that familiar STP logo, they all appear on an endless array of shirts and jackets, clocks and flags, posters and coasters. Mario Andretti Drive has temporarily replaced the Washington Street sign in downtown Indianapolis. Fans driving through the main gate to Indianapolis Motor Speedway's infield will pass large banners commemorating the 50th anniversary of Andretti's first and only Indianapolis 500 win. Anyone who strolls through Gasoline Alley needs a metal badge with Andretti's image to get inside. There's even a Mario Andretti Store, right next to the track's famous pagoda.

When he's not busy signing autographs, posing for photos or taking fans for a ride in IndyCar's two-seater, there are countless interview requests.

At age 79, one of the greatest drivers in racing history is revered as much today as he was all those years ago.

"I know it's special to him," said Michael Andretti, the oldest of Mario's three children. "I think it's so cool he appreciates it, to see him get honored like this. You know it was the most popular win he ever had."

Super Mario celebrated many victories during a career that first began as a secret from the parents who moved the family from Italy to the United States in 1955.

Eventually, he made 407 IndyCar starts, won 67 poles and led 7,595 laps — all series records. His 52 career wins are second all-time. Andretti won the 1967 Daytona 500, the 1972 24 Hours of Daytona and the 1978 world championship. He captured four USAC titles, the IROC championship in 1979, even a national dirt track crown in 1974. Twenty years ago, Andretti and A.J. Foyt were named co-Drivers of the Century by The Associated Press.

But his career has largely been defined by what happened in his 29 Indy 500 starts — and that unlikely trip to victory lane.

"What this race brings to you career wise, it's worth it," the elder Andretti said. "It's just euphoria when you cross that finish line first because it means so much for your career. It's very unfair, trust me, but it's a fact."

Andretti learned the significance of winning this race quickly.

He finished third as a rookie in 1965 then won Indy's pole each of the next two years. After a piston problem forced him out just two laps into the 1968 race, he returned to the Brickyard in 1969 as the favorite.

The expectations suddenly changed when a horrific crash in practice left Andretti with facial burns and forced him into a backup car without the Lotus engine he brought to the track. He started second alongside pole-sitter A.J. Foyt and next to another former race winner, Bobby Unser. On race day, there more problems. Andretti's oil temperature hit 270 degrees after less than 10 laps. Crew members couldn't get the right rear tire loose and he ran the entire race without making a single change.

Inside the cockpit, Andretti was in extreme pain from his burns and a blistering back. Somehow, through that, the badly worn tire, and a degrading gearbox, Andretti was able to nurse the car across the bricks before anyone else. His finish time of 3:11:14.71 was the fastest in race history by nearly five minutes and car owner Andy Granatelli planted a kiss on Andretti's cheek in victory lane. The prize money back then was just shy of $207,000.

The family's fortunes since have become an enduring part of the race. There has never been another Andretti victory.

Andretti made 24 more Indy starts and never again reached victory lane though he still owns a 1981 winner's ring; Unser crossed the finish line first then was docked a position the next day for passing cars coming out of the pits and Andretti was declared the winner. Five months later, Unser won his appeal and was declared the winner.

Michael Andretti qualified for 16 Indy 500s and still holds the title of most laps led by a non-winner. Mario's other son, Jeff, never finished higher than 15th in his three Indy starts. Michael's son, Marco, the 2006 runner-up, will make his 14th Indy start Sunday from the No. 10 position. Michael's cousin, John, started 12 times at Indy and never finished higher than fifth.

That's 0 for 68 since 1969, though Michael Andretti has won the race five times as a team owner.

"I don't know what it is, I don't know if I believe in curses, but there's something weird going on when you have 73 Andretti starts and one win," Michael Andretti said.

Like pretty much every May since 1965, the Andretti family is gathering in Indianapolis and there is fresh attention for Mario's win amid some tough times.

Mario's wife, Dee Ann, died from a heart attack in July. They were married in 1961. His nephew, John Andretti, is going through a second battle with colon cancer.

Inside the Andretti Autosport hospitality tent and amid all the banter between crew members and drivers, Mario Andretti had a quiet moment to realize just how golden this anniversary is for himself and his family.

"I'm enjoying the heck out of everything for all the obvious reasons," Mario Andretti said. "It's fun. I've had a lot of fun with it. I'm still living the dream."