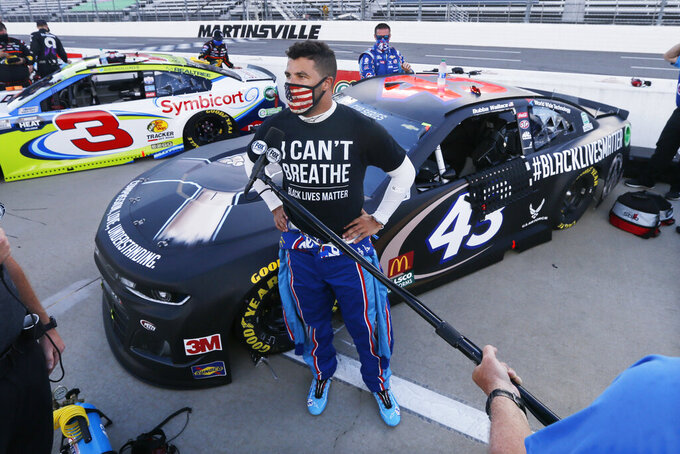 CHARLOTTE, N.C. (AP) — Bubba Wallace can count Spike Lee and Demi Lovato in his corner since he became the leader of NASCAR’s push for change.

Where he has failed to find support is from corporate America.

Wallace is the only black full-time driver at NASCAR's top level and has had to scrap for sponsorship money his entire career. Since he has taken a prominent role as an activist — successfully calling on NASCAR to ban Confederate flags at its events and leading the conversation among his peers about racial equality — the only new friends Wallace has are celebrities and fans.

Richard Petty Motorsports has not heard from a single potential sponsor looking to back Wallace on the track.

“Nope. Nothing,” Wallace said Friday in an interview with The Associated Press. "There's a lot going on and part of me thinks, ‘Hell, they always told me winning would make the sponsors come,’ and we won a couple times and the sponsors never came.

“I'm not doing this for sponsorship," he added. "I am doing this because it's what I believe in. If sponsors do come through, then they are showing support and they believe in the message and they line up with the same core values that I have. That's important.”

The 26-year-old Wallace was widely praised at Wednesday night's race for running a Black Lives Matter paint scheme on the iconic No. 43 made famous by Hall of Famer Richard Petty, his boss. The opportunity for RPM to support Wallace with the paint scheme was possible only because no other corporation had bought the hood space to advertise.

RPM has sponsors including the Air Force, Coca-Cola and McDonald's for 16 races this year. It has space avaialble for 20 more.

It has been a whirlwind two weeks for Wallace, who at last has grown comfortable with a pioneering role he never sought.

He understood early that his rise through NASCAR gave him a platform he had to use responsibly. His 2013 victory in a Truck Series race was only the second in a NASCAR national series by an African American driver (Wendell Scott, 1963), and helped push him into the elite Cup Series. He pinned a message to his Twitter profile in 2017 that remains there today: “There is only 1 driver from an African American background at the top level of our sport..I am the 1. You’re not gonna stop hearing about “the black driver” for years. Embrace it, accept it and enjoy the journey.”

It has not always been a comfortable role. It took Wallace a few days to offer his thoughts on fellow driver Kyle Larson's firing for use of a racial slur. Even after George Floyd was killed last month while in police custody in Minneapolis, Wallace was not the first driver to speak out for racial equality.

To understand why requires a look at his childhood. Wallace is of mixed race, born in Alabama but raised in Concord, North Carolina, the area most NASCAR teams call home. He was drawn to auto racing over other sports and admittedly was somewhat sheltered in his youth from racial discrimination. His father, who is white, wouldn’t stand for ignorant or racist comments and handled all negative experiences his son encountered at the tracks.

Wallace remembers those comments well, things like “can you afford this car?” and the suggestion he must sell drugs to pay for luxuries.

It was not necessarly Floyd's death that was a watershed moment for Wallace. He told AP he began to find his public voice on racism after watching video in May of Ahmaud Arbery's fatal shooting in Georgia. He said he now recognizes he must not let his platform go to waste.

“We are much more than just drivers who drive a race car,” he said. “We are ambassadors. We are leaders of our own brands, and then in life things are thrown at you, you have to stand up for what's right. That brings on a whole new role. It's not on the front of the agenda that you see, but if you read the fine print it's part of becoming an athlete and the pedestal you get with that.”

It's been challenging for Wallace, who first publicly called on NASCAR to ban the Confederate flag in a live CNN interview. By the time NASCAR responded Wednesday, Wallace had two sheriff's deputies assigned to him for security at Martinsville Speedway in Virginia.

His father, with whom he's had a sometimes rocky relationship with, traveled with him to Atlanta Motor Speedway where Wallace wore an “I Can't Breathe” shirt over his firesuit. He was part of a driver effort all last week to make a video calling for change, and by the end of the race he was completely drained and fainted as Fox interviewed him.

Wallace said his sleep has been choppy — he finished a round of morning television interviews and crashed for a four-hour nap — and is trying to find time to focus on Sunday's race near Miami while also answering the overwhelming crush of attention he's been under.

He has leaned on his family and his girlfriend, Amanda, who has teased him about pop star Lovato's support ("big fan crush there"). And he is also noted there's now worry about his safety at the track amid a backlash from fans angry over the flag ban.

Wallace isn't sure what comes next in his role as activist but he said he is determined to fight for equality. He has not kneeled during the national anthem, which is a revered ritual in NASCAR's elaborate prerace ceremonies.

He hasn't ruled it out.

“I've thought about it, still thinking about it," Wallace said. “I'm still learning up on it, reading about it, so I'm not clear on that just yet.”