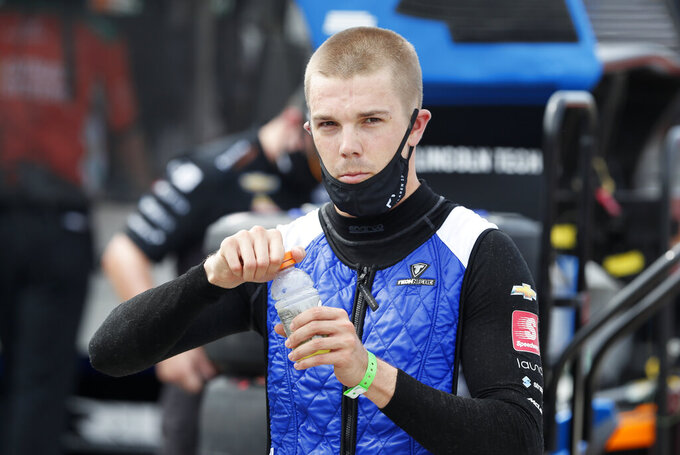 FILE- In this July 18, 2020, file photo, Oliver Askew stands in the pit area during practice for an IndyCar Series auto race, at Iowa Speedway in Newton, Iowa. The IndyCar rookie will not compete in next week's doubleheader at Indianapolis because of concussion-like symptoms that date to his crash in the Indianapolis 500 last month. (AP Photo/Charlie Neibergall, File)

Oliver Askew and Arrow McLaren SP will part ways at the end of this IndyCar season, a rookie year disrupted by a concussion suffered in the Indianapolis 500.

The Arrow team said Monday that Askew will compete in the Oct. 25 season finale if he's medically cleared but has been released to look for a new job in 2021.

The 23-year-old missed two races earlier this month at Indianapolis Motor Speedway while working on a recovery plan with the University of Pittsburgh Medical Center’s sports medicine concussion program. Askew suffered the concussion in an Aug. 23 crash but competed in four races before he was diagnosed.

Askew's performance dipped dramatically after Indianapolis and he didn't reveal his health struggles out of fear of losing his job.

“We believe that Oliver has a great deal of talent and potential for the future. He has had an incredibly difficult rookie year, with a lack of overall track time and recent medical issues,” Arrow McLaren SP co-owner Sam Schmidt said in a statement.

“We want to give Oliver the time to pursue new opportunities for 2021 and the ability to race at St Pete. Come the end of the year, we will wish Oliver the very best in all of his future endeavors and he will always be a friend of the team.”

Before the crash at Indianapolis, Askew was leading the rookie of the year standings and had scored one podium and six top-10 finishes in six races. Last year's Indy Lights champion had finished third and sixth at Iowa, the previous two races before Indianapolis.

He did not finish higher than 14th in the four races after the crash.

“I’ve certainly had to develop very quickly as a driver and I know I have shown my speed and capability when able to this season,” Askew said in a statement. “However, I think it makes sense to pursue the next chapter of my career outside the team.”