Athletes act: Stars rise up against racial injustice in 2020 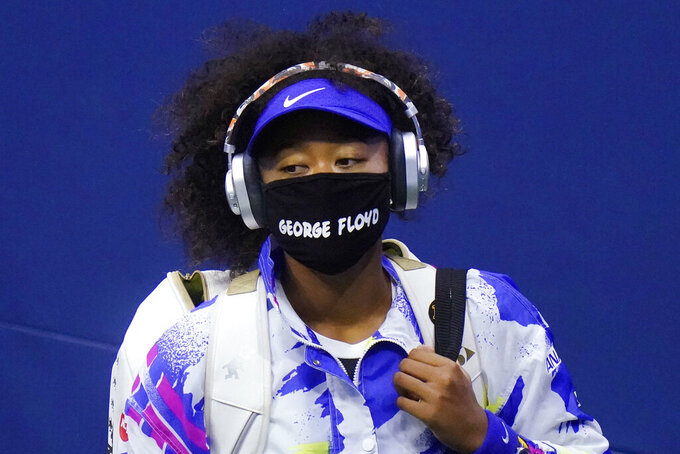 FILE - Naomi Osaka, of Japan, wears a protective mask due to the COVID-19 virus outbreak, featuring the name "George Floyd", while arriving on court to face Shelby Rogers, of the United States, during the quarterfinal round of the U.S. Open tennis championships in New York, in this Tuesday, Sept. 8, 2020, file photo. In a most unusual year already thrown into chaos by the coronavirus pandemic, many athletes took unprecedented steps when a nationwide reckoning on race spilled into the streets of American cities after the killing of Floyd, a Black man, while in Minneapolis police custody. (AP Photo/Frank Franklin II, File)

OKLAHOMA CITY (AP) — As the NBA neared its restart in late July, its players vowed to keep the calls for social justice reform at the forefront in the wake of the police killings of George Floyd and Breonna Taylor.

The basketball stars weren't the only athletes to act.

In a most unusual year already thrown into chaos by the coronavirus pandemic, many athletes took unprecedented steps when a nationwide reckoning on race spilled into the streets of American cities after the death of Floyd, a Black man, during a May arrest in Minneapolis.

The NBA painted “Black Lives Matter” on the courts inside their Orlando, Florida, “bubble" and social justice messages were emblazoned on the backs of jerseys. Players and coaches during “The Star-Spangled Banner" locked arms and knelt.

Kneeling, which drew the ire of President Donald Trump and several team owners when NFL quarterback Colin Kaepernick started doing it in 2016 to protest racial injustice, became a ubiquitous gesture during the national anthem this year -- and during rallies after Floyd was killed by a white police officer who pressed a knee against his neck for nearly eight minutes.

As excitement built as games returned, another sobering moment pushed the sports world to mobilize. Jacob Blake, a Black man, was shot seven times by police on Aug. 23 in Kenosha, Wisconsin, leaving him paralyzed from the waist down.

“We all hurt,” Chris Paul, president of the National Basketball Players Association, said at the time. “We’re all tired of just seeing the same thing over and over again, and everybody just expects us to be OK just because we get paid great money. We’re human. We have real feelings.”

Three days later, the Milwaukee Bucks refused to play against the Orlando Magic and demanded Wisconsin officials address police brutality. The whole league shut down temporarily, with other sports such as Major League Baseball, the WNBA, the National Hockey League and the National Football League halting games and practices.

Paul later backed up his words. He joined nearly 2,500 people on a march to a voting site in North Carolina. More than 20 NBA teams eventually signed on to host voting or other election-related activities — including voter registration and poll worker training — in their arenas or practice facilities.

James, The AP's Male Athlete of the Year, already had started More Than A Vote. The organization dedicated to maximizing Black turnout in November drew more than 42,000 volunteers to work at polling stations.

In August, Curry appeared with his wife, Ayesha, and their two daughters in a video endorsing president-elect Joe Biden during the Democratic National Convention.

Osaka — whose father is Haitian and mother is Japanese — declared she would not play her semifinal of a U.S. Open tuneup tournament after Blake's shooting. Other tennis players expressed support and the tournament was halted for one day, prompting Osaka to remain in the draw.

The AP’s Female Athlete of the Year later won the U.S. Open tournament while wearing a mask with the name of Tamir Rice, a 12-year-old boy killed by police in Ohio in 2014. Throughout the event, Osaka wore masks honoring Black victims of violence -- a different one for each of the seven rounds it took for her to win the tournament. The names were Taylor, Elijah McClain, Trayvon Martin, Ahmaud Arbery, Floyd, Philando Castile and Rice.

Stills was one of 87 demonstrators arrested at a protest march at the house of Kentucky’s attorney general to demand justice for Taylor, who was shot and killed by police in Louisville when they burst into her home in a botched raid.

Wallace, the only full-time Black driver at the NASCAR national level, first began speaking out against racial injustice in America in the spring. His car featured a “Black Lives Matter” paint scheme. In June, he successfully called on NASCAR to ban the display of the Confederate flag at races.

“If I feel something is right, say it, and that’s it,” he said. “It doesn’t need to be for the press or the cameras or the attention. It’s Bubba Wallace and I say what I want to.”

Sticking to his beliefs helped Wallace land about $18 million in sponsorship from various companies that allowed 23XI Racing to launch with owners Michael Jordan and Denny Hamlin. It will be the first Cup team with both a Black team owner and a Black driver.

The fight against social injustice expanded into dealing with the effects of racism. Jenkins, a safety for the New Orleans Saints is executive producer of a documentary titled “ Black Boys. " The film focuses on social and emotional effects of racism against Black men and boys.

Jenkins applauds the NFL for its increased social justice messaging and pushing for voter registration before the November election. Half the NFL’s 32 teams made their facilities available for election purposes following offseason conversations between players and commissioner Roger Goodell.

Jenkins believes more can be done.

“We've seen the league use its political will to boost their business interests," he said. "We'd love to see them use that same will, that same power to create some of the changes in policy that players have been clamoring about. And more importantly, that the communities that they make their money in have been asking for.”