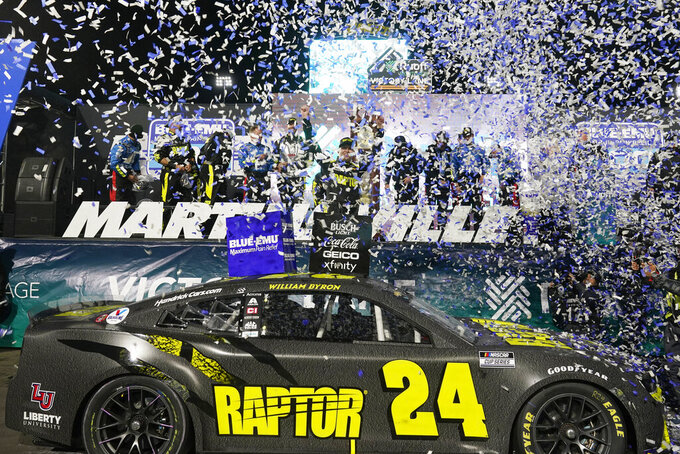 William Byron (24) is showered with confetti in Victory Lane after he won the NASCAR Cup Series auto race at Martinsville Speedway on Saturday, April 9, 2022, in Martinsville, Va. (AP Photo/Steve Helber) 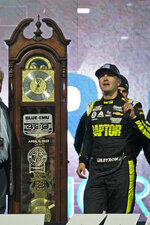 Last race: William Byron overcame a final restart and a last-lap bump from Logano at Martinsville to become the first multiple-race winner in the series.

Fast facts: Byron led 212 laps after Hendrick Motorsports teammate and pole-sitter Chase Elliott led the first 185. ... Hendrick became the first team in history to lead 10,000 laps at one track. The organization has also won four of the eight races run this year. ... Elliott leads Ryan Blaney by three points in the standings. Byron is 12 back. Neither of the top two have won this season.

Last race: William Byron took the lead when the leaders pitted on lap 104 of 200 and made his older tires stand up to win at Martinsville.

Fast facts: The victory was Byron's first in the series since 2016. He led all but two of the final 96 laps. ... 2016 series champion Johnny Sauter finished second in just his second start of the season. ... Zane Smith went wire-to-wire to win the first stage and Ben Rhodes won the second. ... There were 11 cautions for 71 laps. ... Rhodes leads the standings by four points over Chandler Smith.

Last race: Charles Leclerc won the pole and completed a dominant weekend in his Ferrari by winning the race, too, in the Australian Grand Prix.

Last race: : Josef Newgarden won for the first time on the downtown streets of Long Beach, holding off Romain Grosjean to make Team Penske 3 for 3 to open the IndyCar season. Newgarden led a race-high 32 laps to win a second consecutive race. Penske teammate Scott McLaughlin won the opener at St. Petersburg, then Newgarden won at Texas and now Long Beach to bump McLaughlin from the championship lead. Newgarden passed McLaughlin in the final turn at Texas to give Team Penske victories in the season’s first two races.

Next race: May 1, Birmingham, Alabama.