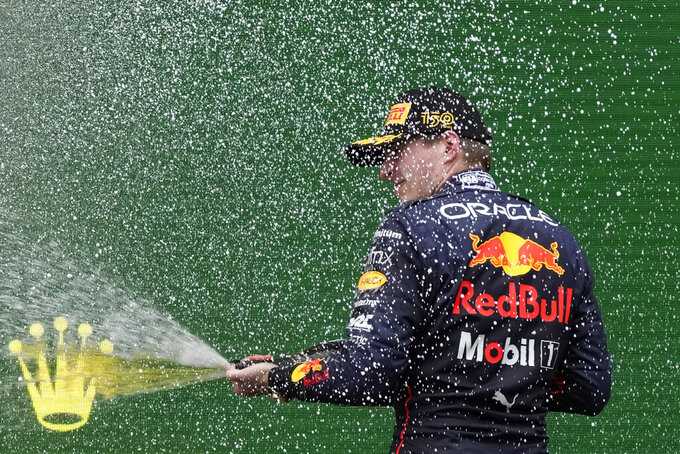 Red Bull driver Max Verstappen, of the Netherlands, celebrates on the podium after winning the Emilia Romagna Formula One Grand Prix, at the Enzo and Dino Ferrari racetrack, in Imola, Italy, Sunday, April 24, 2022. (AP Photo/Luca Bruno)

Fast facts: Chase Elliott leads Ryan Blaney by 21 points in the standings with two-time winner William Byron third, 34 points back. ... Elliott leads despite having just one top-five finish this season and no wins, same as Blaney. ... Elliott and fourth-place Kyle Busch share the lead with seven top-10 finishes.

Next race: May 8, Darlington, South Carolina.

Last race: Noah Gragson held off Jeffrey Earnhardt in triple overtime to win at Talladega, his second victory of the season.

Fast facts: Gragson jumped a spot to second in the standings, 40 behind A.J. Allmendinger. Ty Gibbs is 45 behind in third. ... Allmendinger has finished in the top 10 in all nine races; no one else has done it more than six times. ... Eight of the nine races have been won by series regulars. The only outlier is Cole Custer, who won at Fontana, California, in the second race of the season.

Next race: May 7, Darlington, South Carolina.

Last race: Defending series champion Max Verstapped rebounded from a blown engine in the previous race and led Red Bull's first 1-2 finish since 2016 as he won from the pole at Imola.

Last race: Josef Newgarden won for the first time on the downtown streets of Long Beach, holding off Romain Grosjean to give Team Penske three wins in three races to open the season.

Fast facts: Newgarden leads teammate Scott McLaughlin by five points and Palou by 15 in the standings. ... All three have a pair of podium finishes through three races. ... McLaughlin has led 235 of the 433 laps run thus far; Newgarden is next with just 35. ... Only nine drivers have been running at the finish of every race and only six have finished on the lead lap of all three.

Next race: May 14, Indianapolis, Indiana.

Next event: May 1, Concord, North Carolina.