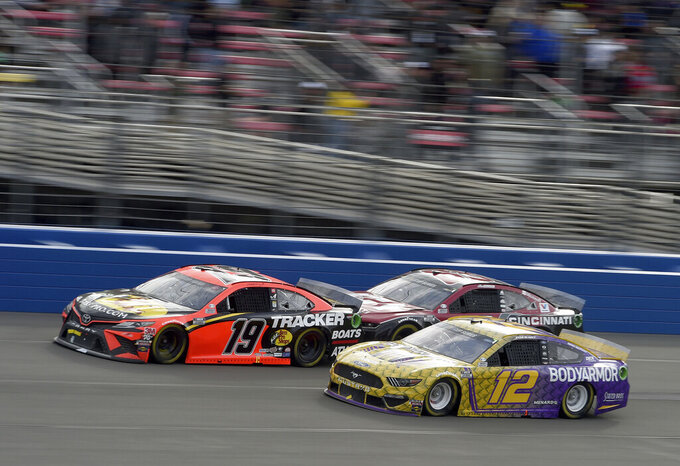 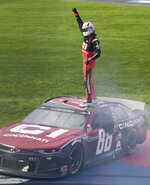 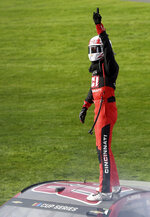 FONTANA, Calif. (AP) — Before Alex Bowman started looking for tattoo shops somewhere between Los Angeles and Phoenix, he celebrated a win that suggested even more permanent success ahead for the hard-working driver and his resurgent team.

The win was the culmination of a tremendously encouraging weekend for Bowman, who has run 156 Cup races without extraordinary success. He is in the final year of his contract with Hendrick Motorsports.

But his No. 88 Chevrolet felt like the fastest car on this weathered, wide asphalt from the moment they unloaded — and Bowman decisively proved he knew what to do with it.

“We've been so good to start this season,” Bowman said. “We've got to go win a bunch more, but man, it feels good to have one this early.”

Bowman's future might be uncertain, but he's fine with it after this dominant performance at Fontana. He led 110 laps and managed to stay out front after the final pit stops before cruising to the checkered flag in a smooth, fairly uneventful race featuring only one caution outside of the stage breaks.

“There’s never a situation that I feel completely comfortable in,” Bowman said. “I feel like if somebody doesn’t want you driving their race car, you’re not going to be driving it. Hendrick Motorsports is where I want to be. It’s where I want to stay for the rest of my career. It’s where I’ve always wanted to be. It is a contract year, but every year of my career has been a contract year.”

The 26-year-old Arizonan grew up racing almost weekly in nearby Pomona. He collected the track's oversized surfboard trophy and partied with his team — but he also thought ahead with trepidation to the “88” tattoo he'll have to get soon because of a pact with Aaron Gillespie, a friend who is the drummer for metalcore band Underoath.

“We made a bet at Daytona,” Bowman said with a grimace. “We've been talking about it for the last two weeks. Apparently I have to get a neck tattoo, which I'm not real sure if that's going to happen or not. But yeah, next time we're all together, I guess we're all going to get tattoos.”

Six-time Fontana champion Jimmie Johnson finished seventh after running near the front for most of his final race as a full-time driver at the NASCAR track closest to his native El Cajon, California, about 100 miles away. His winless streak is at a career-worst 98 races, but he showed impressive pace before his Hendrick teammate took charge of the race.

“Our team is going in the right direction,” Johnson said. “We just faded too much at the end. I thought I was going to blow a tire, but we salvaged a top 10 out of it. It's a huge thing for us out here in California. There's been great vibes the whole weekend."

Johnson started on the front row at the track where he has won more than any other driver, starting with his first career Cup win in 2002.

The weekend featured several tributes to the seven-time series champion, including a five-wide salute during the warmup laps. Johnson's wife and daughters waved the green flag to start the race.

“It was super special for me,” Johnson said. ‘I’m just grateful to the track."

Daytona 500 champion Denny Hamlin finished sixth after starting at the back when he changed a shock absorber before the start. Hamlin then put Kyle Larson into the wall during the first stage with a bump from behind, and Larson needed significant repairs.

The crew chiefs of Ricky Stenhouse Jr. and Ryan Preece were ejected after NASCAR found illegal body modifications on the cars, which had to drop to the rear on the pace laps.

Ryan Blaney is the overall points leader even after finishing 19th at Fontana. He led 54 laps and was in contention to chase down Bowman before he was forced to the pits with three laps left by a tire issue.

Blaney's performance was particularly sweet because it came with his No. 12 Team Penske Ford painted purple and gold in honor of Kobe Bryant. The Lakers superstar was an early investor in BodyArmor, one of Blaney's sponsors.

Clint Bowyer finished 23rd after starting on the pole. That's a typical hazard at Fontana, where the cars that perform best in qualifying frequently aren't set up to excel in the race. Bowyer is still a solid 13th in the overall points.

The Cup Series runs next Sunday at Phoenix Raceway in a key stop because the track is also the site of the series' championship race Nov. 8.