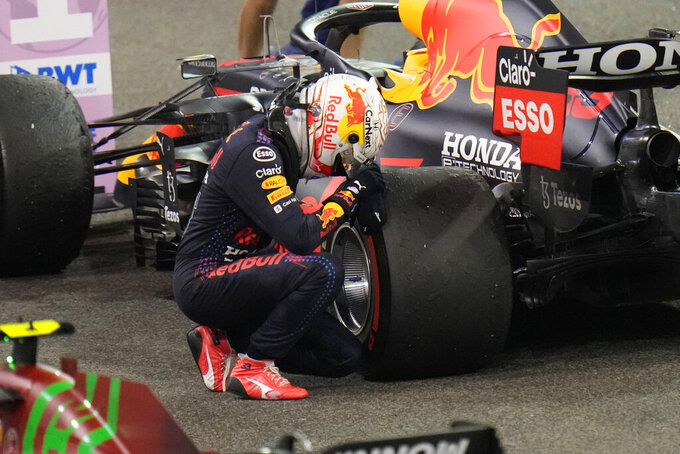 Red Bull driver Max Verstappen of the Netherlands kneels next to his car after he became the world champion after winning the Formula One Abu Dhabi Grand Prix in Abu Dhabi, United Arab Emirates, Sunday, Dec. 12, 2021. (AP Photo/Hassan Ammar)

PARIS (AP) — An incredible Formula One title fight ended Sunday on the last lap of the final race with a dramatic overtaking move. Max Verstappen passed Lewis Hamilton at the Abu Dhabi Grand Prix in one of the most memorable moments in F1 history. It gave the sport's next superstar his first world title and denied the veteran Hamilton a record eighth.

“Two exceptional and very different drivers in terms of their mentality, their character, their style of driving," four-time F1 champion Alain Prost told broadcaster Canal Plus. "It was magnificent ... and it might just be the best season ever.”

Here’s how the season unfolded:

Hamilton wins the Spanish Grand Prix in early May for a third win in four races to lead Verstappen by 14 points. The seven-time champion is on a roll. But two weeks later things change.

It goes wrong for Hamilton and right for Verstappen in Monaco. The Dutchman secures an excellent win to take a championship lead for the first time. Hamilton finishes seventh.

Verstappen looks imperious at the Azerbaijan GP but keeps pushing for fastest laps instead of nursing his lead. With four laps left he crashes after a blown tire. Surely this gifts Hamilton the title lead? Not so. From the restart, Hamilton makes an astonishing error by switching his brakes off and goes straight off track. Neither scores points but damage limitation goes Verstappen's way in the first of several dramatic races that shape a unique season.

Verstappen leaves Austria in complete control after three straight wins put him 32 points clear. The Red Bull driver is driving and sounding like a champion. He leads the defending champion Hamilton 5-3 for wins and 5-2 in pole positions. He's in supreme form and Mercedes is worried heading to the British GP.

The season turns upside down in a flash. Verstappen takes pole to put Hamilton under massive pressure after his five races without a win. Another victory for Verstappen will stretch his lead to 40 points. Verstappen gets away from pole but Hamilton draws on all his speed to stay with him heading into Copse — the fastest corner at Silverstone — and tries to overtake. Hamilton clips Verstappen and sends him crashing out on Lap 1 and into a crash barrier at 51G. Despite a 10-second time penalty, Hamilton wins the race to shred Verstappen's lead from 33 points to eight. Verstappen goes to the hospital for checks. Red Bull team principal Christian Horner is furious and the war of words between him and Mercedes team principal Toto Wolff is just starting. Verstappen calls Hamilton's celebrations “disrespectful."

More bad luck for Verstappen on Lap 1. Hamilton is on pole at the Hungaroring. Verstappen makes a good start from third — but gets nudged off track following a clumsy error from Hamilton teammate Valtteri Bottas. Verstappen limps with a damaged car to take ninth and a measly two points. “ Again, taken out by a Mercedes,” he laments. Hamilton's second place sends him eight points clear at the mid-season break.

One of the most bizarre races in F1 history ends with Verstappen crawling at snail's pace behind a safety car for a few laps on a circuit drenched by hours of heavy rain. After it restarted nearly three hours late, the race is shortened to last one hour with only half points awarded to the winner. Pole-sitter Verstappen needed to complete only two laps to earn 12.5 points. Hamilton is third and his lead cut to three points.

It's looking good for Verstappen again. Roared on by adoring orange-clad home fans he wins the Dutch GP from pole in front of King Willem-Alexander to move three points ahead of Hamilton — who takes a welcome bonus point for fastest lap.

Tensions boil over at the Temple of Speed at Monza, home of the Italian GP. As Hamilton and Verstappen fight for position, their cars collide. In a terrifying scene Verstappen's car lurches up and lands on top of Hamilton's Mercedes. Hamilton's head is protected by the halo system and he's unharmed. Verstappen shows no sportsmanship in striding off with Hamilton still in the car. Wolff even describes it as “a tactical foul” by Verstappen, who moves five points ahead having taken two points in the sprint race.

The Russian GP ends with late drama as rain lashes down and Lando Norris slides everywhere on the wrong tires. Hamilton passes him for a record-extending 100th win and reclaims the overall lead by two points. But Verstappen drives well from the back of the grid following an engine penalty and profits from the chaos to finish second. He takes the lead back from Hamilton at the Turkish GP, where Hamilton starts 11th because of a 10-place grid penalty, drives to third, but ends up fifth after a late tire change. With six races left Verstappen is six points ahead.

Verstappen wins under pressure from Hamilton in the United States and dominantly in Mexico to move 19 points ahead heading to Brazil. Then everything changes again in Sao Paulo, where Hamilton produces some superb driving. He wins despite starting from 10th position on the grid due to a penalty, his second that weekend. Verstappen finishes second but two extra points from the sprint race soften the blow of Hamilton's remarkable triumph and he leads by 14 points — although it should have been more given Hamilton's setbacks.

As F1 heads to the Middle East for inaugural races in Qatar and Saudi Arabia talk is about sports washing and human rights. On the track, Hamilton wins both to pull level with Verstappen heading into the last race. Wolff and Horner crank up the pressure with an astonishing war of words in a press conference more befitting of an MMA fight — and those were Wolff's words. Tensions increase between Hamilton and Verstappen after he calls the Dutchman “crazy” following their Jeddah joust. The Saudi Arabian GP becomes one of the most astonishing races in recent history. Verstappen should have started from pole after a staggering last lap in qualifying but clipped the wall on the last turn. He pushed too hard when he didn't need to — just like in Azerbaijan.

“Lap 58” in Abu Dhabi will become synonymous with one of the most dramatic finishes in sport. The two rivals had 369.5 points each before the last race but Verstappen had the thinnest of advantages. If both failed to finish — or ended up level on points due to race position and fastest lap — the title was Verstappen's courtesy of wins: 9-8. Verstappen started from pole position with Hamilton in second. Verstappen made an uncharacteristically sluggish start and allowed Hamilton to take the lead and keep extending it. Hamilton was cruising to title No. 8 until Nicholas Latifi’s crash brought out a safety car with just a few laps left. After confusion the race restarted on the final lap with Verstappen on new tires. The 24-year-old Verstappen took this chance and surged past Hamilton to the first of what could be multiple world titles. Trying to overturn the outcome, Mercedes lost two protests after the race, but then filed for reconsideration to the International Court of Appeal. A messy end to a great season.