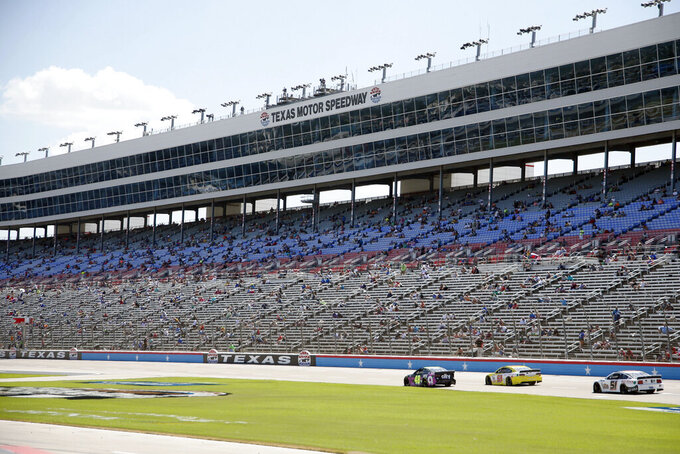 CHARLOTTE, N.C. (AP) — Kyle Busch was hit with a wave of backlash when he griped about drivers who lack the experience to race at NASCAR’s top level.

This was last fall, after the opening race of the playoffs at Las Vegas Motor Speedway, when Busch ran into the back of Garrett Smithley, who was 12 laps down.

“We’re at the top echelon of motorsports, and we’ve got guys who have never won Late Model races running on the race track,” Busch fumed. “It’s pathetic. They don’t know where to go.”

Busch’s point was lost in his delivery and he was quickly painted as an entitled champion driving for an elite team who just wanted a backmarker to get out of his way. Smithley and other lesser-known drivers from underfunded teams quickly defended their right to race in the Cup Series.

Busch’s argument — that there should be standards to be among the top 40 NASCAR racers each week — was never actually addressed. And here we are again: Quin Houff, in his 35th career Cup start, made a late mistake Sunday at Texas Motor Speedway that not only scrambled the finish but altered the playoff picture.

Houff tried to dive onto pit road but hit two other cars he did not see, bringing out a caution with 29 laps remaining in the race. Several contenders had pitted and dropped a lap off the pace because of the untimely caution. That paved the way for Richard Childress Racing to grab its first 1-2 finish since 2011 when Austin Dillon and Tyler Reddick held off the rest of the field. Dillon now has a coveted spot in the 16-driver playoff field.

Houff posted a video on social media explaining “we were trying to get to pit road and I didn’t get called off in time and the guys that were committed underneath me were already there, and that’s my fault. I had a spotter mirror there that we use in the window on the left side of the car, and it had fallen off so I couldn’t see out of that. So, rookie mistake."

The error highlights NASCAR’s loose approval process for drivers. The series does have standards – a driver must be 18 to compete full-time in one of the three national series but 16-year-olds can compete in Truck Series races on road courses and tracks 1.25 miles or less in length – but approval beyond that comes from NASCAR officials.

James Davison, who has five career starts in the Indianapolis 500, was not approved to make his Cup debut at Talladega Superspeedway in June. He had never raced a stock car on an oval track and NASCAR delayed his debut a week until the series moved to Pocono Raceway.

Houff, meanwhile, has a sparse NASCAR resume. He had five starts in ARCA and 10 in the Xfinity Series before earning a part-time Cup ride last season. The 22-year-old Virginian was parked for being too slow in his fourth Cup race and didn’t finish higher than 28th in 17 starts. He is full-time this season for StarCom Racing and was a career-best 23rd at Indianapolis but has yet to finish on the lead lap this season.

Brad Keselowski, a former series champion who was not affected by Houff’s crash Sunday, noted it had the unintended consequence of creating a dramatic finish.

“There’s the entertainment way to look at it and say that probably created a more entertaining finish,” Keselowski said. "So if you like chaos, then that was good."

The flip side, he said, was the expectation that drivers are racing against “peers of similar talent levels." The incident, for example, came at the expense of Ryan Blaney, Keselowski’s teammate, who had led 150 laps only to find himself trapped a lap down because he’d pitted before Houff crashed.

“Got to do better than that,” Miller said on SiriusXM NASCAR Radio. “Every decision that’s made out on the race track is an instantaneous, spur-of-the-moment decision, but I think that nobody could argue that wasn’t a poor one.”

The pandemic has forced NASCAR into a frenzied return to racing in which events are held on one day without practice or qualifying. That lack of track time is hampering young drivers, perhaps Houff included.

Keselowski has suggested a ladder system to develop drivers as they move up to Cup. NASCAR has no such system and, as long as a driver is approved to race by the sanctioning body, a car owner can make any sort of deal with anyone trying to compete in NASCAR. Some of the smaller teams fill their seats with drivers who bring sponsorship dollars, and not talent, to the organization,

“I would like to see drivers be able to graduate into this level and equally I’d like to see them be able to be removed from this level when they have repeated issues,” Keselowski said. “I have seen in the past where drivers that have had this issue multiple times somehow are still here, where I think they should effectively be placed in a lower series or asked to go back to a more minor-league level to prove their salt."

Clint Bowyer argued a ladder system into Cup does exist but the economy has accelerated the promotion rate.

“Just because you have money or whatever else, you shouldn’t be able to just buy your way onto the race track," Bowyer said. "I don’t like having guys that just show up and race every now and then at this level of racing. That’s not right.

"You don’t just show up and line up against Patrick Mahomes and the Kansas City Chiefs. You shouldn’t be able to do that against Stewart-Haas Racing or Joe Gibbs Racing or anything else.”