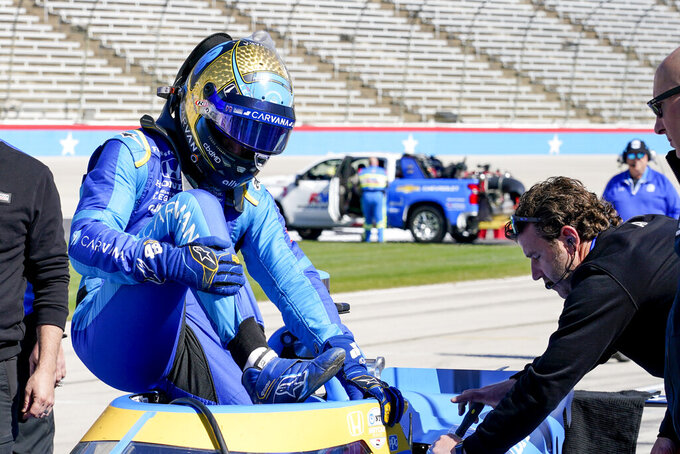 Jimmie Johnson gets out of his car following the first practice round of the IndyCar Series auto race at Texas Motor Speedway in Fort Worth, Texas on Saturday, March 19, 2022. (AP Photo/Larry Papke)

FORT WORTH, Texas (AP) — Oh, JJ, if only you had run IndyCar's ovals from the start.

That was the sentiment following Jimmie Johnson's sixth-place finish Sunday at Texas Motor Speedway, where he ran his first career open-wheel race on an oval track. He had barely crossed the finish line before race engineer Eric Cowdin was already in his ear with the newest goal: “Now let's go win the Indy 500.”

Hyperbole? Johnson certainly thought so as soaked in the forgotten feeling of a successful race.

“I feel like that’s an aggressive statement, for sure,” said Johnson, who then paused to consider his odds. “But why not? Why can’t we? The 500 is a special race. We’ve seen favorites win. We’ve seen the race won by strategy, first-time winners, a variety of different things."

And just like that, Jimmie Johnson is now considered a contender for “The Greatest Spectacle in Racing.” It seems absurd considering he went to Texas last weekend with a pair of back-to-back 17th-place finishes to close his rookie season as the highlights of his move to IndyCar after a NASCAR career spanning two decades.

The transition has been hard, even for a seven-time NASCAR champion and future Hall of Famer with 83 career Cup Series victories. Everything in IndyCar has been brand new to Johnson, from the car, the street and road circuits, the rules, even where to find the bathrooms at the tracks.

Johnson was the new kid in class at 45 years old, and trying to catching up on all the material was often overwhelming. Johnson had been deeply shaken in 2011 by the death of two-time Indianapolis 500 winner Dan Wheldon in a crash at Las Vegas, and to him and his wife, skipping the oval races was a comfortable decision.

He changed his mind ahead of this second season with Chip Ganassi Racing, and even though his seven NASCAR wins at Texas are the most in track history, expectations were measured. He was disappointed to qualify 18th and really only hoped to finish inside the top 10.

But at a track where passing is extremely difficult in an Indy car, Johnson passed 21 cars — 17 for position. Of those, seven passes were inside the top 10 and two were in the top five, including his brief move past teammate and six-time IndyCar champion Scott Dixon.

Afterward, he dismissed the obvious question: Did he regret skipping the ovals last year?

“I hadn’t thought about that until now,” he said. “No. I really don’t have any regrets. It’s been a great journey. No regrets at all.”

“Did Jimmie finish sixth? That’s legit. Hard to finish sixth at Texas. It’s hard. Like, that’s really good,” Newgarden said. "It has been a steep learning curve. He’s had to unlearn an entire career of operating procedures. The Indy car is so removed from what a stock car is. For him to be able to get on top of that so quickly, it makes sense it’s going better here at Texas, it’s closer to what he’s used to procedurally.

“I don’t want to act too surprised because he is a seven-time champ, incredible worker and teammate. I need to watch this race back, see how he got there. I’m sure he’ll be a huge threat at Indy.”

He received another ringing endorsement from runner-up Scott McLaughlin, one of Johnson's new golfing buddies. McLaughlin led 186 laps only to lose the race when teammate Newgarden passed him in the final turn. McLaughlin said he noticed Johnson passing drivers on the outside — a lane at Texas few choose to try because a traction compound sprayed for NASCAR has made the top too slippery for IndyCar.

“He’s certainly coming strong. I’m sure he feels a lot more confident on the ovals. He’s going to be good at Indy,” McLaughlin said.

Johnson's finish was part of a strong day for Ganassi, which placed all four of its drivers in the top seven. Marcus Ericsson led the way in third, a career-best finish on an oval, and said the organization leaned on Johnson's knowledge of Texas in race prep.

“Jimmie was a great asset for us this weekend with all his experience on ovals. You could definitely feel already from lap one this is more like his home, driving on the ovals,” Ericsson said. "Even though the cars are very different than what he’s used to, he’s been helping a lot this weekend.

"It bodes well for the rest of the year to have that many strong cars and drivers on the ovals. That’s going to help us especially for the 500 coming up.”

On Monday, team owner Chip Ganassi was still reveling in how well his driver did at Texas and what it could mean moving forward. There are four ovals remaining on the schedule and Ganassi said he wouldn't be surprised if Johnson is the best oval driver in his organization by the end of the season.

“This does so much for him, gets him more confident in the car, shows him that he still knows how to do this,” Ganassi said. “He just cleared so much paperwork off the desk with that run.”

IndyCar has three more races before the Indy 500, on the street course at Long Beach and then road courses at Barber in Alabama and at Indianapolis Motor Speedway. Johnson has raced all three circuits before, which gives him more seat time to acclimate ahead of his debut on Indy's famed, 2.5-mile oval.

Johnson, by the way, is a four-time winner at Indianapolis in NASCAR. So, let the Indy 500 mania officially begin.