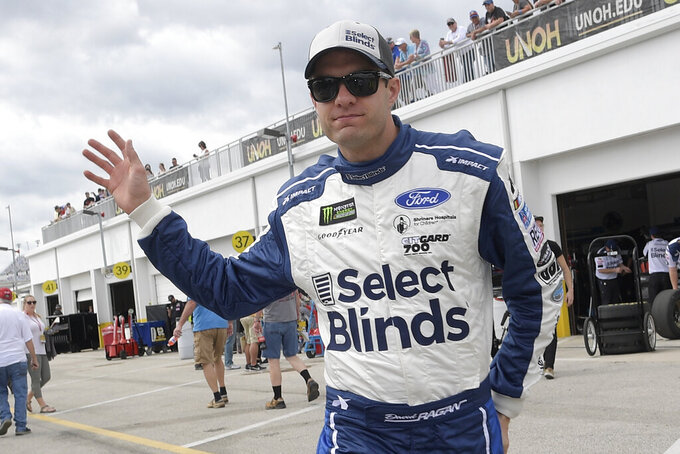 FILE - In this Feb. 16, 2019, file photo, driver David Ragan waves to fans while walking through the garage area during a practice session for the NASCAR Daytona 500 auto race at Daytona International Speedway in Daytona Beach, Fla. David Ragan and Front Row Motorsports announced Wednesday, Aug. 14, 2019, that Ragan will step away from full-time NASCAR competition after this season. Ragan will continue to race on a part-time basis in NASCAR and other series at his desire.(AP Photo/Phelan M. Ebenhack, File)

Ragan said Wednesday in a statement from Front Row Motorsports that he will race on a part-time basis in 2020 in NASCAR and other series. The 33-year-old Ragan cited his desire to spend more time with his wife and two daughters in walking away from the 38-race, full-time job as a NASCAR driver.

Said Ragan: "My children are growing up quickly, and I want to concentrate my time in being the best father and husband I can be."

Ragan made his Cup debut in 2007. He has 457 career Cup starts, with two victories. The Georgia-born Ragan was NASCAR's rookie of the year in 2007.

Front Row did not announce who will replace Ragan in the No. 38 Ford.