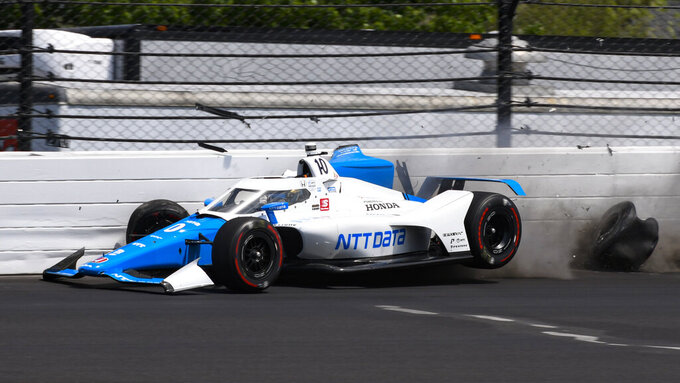 The car driven by Alex Palou of Spain hits the wall in the second turn during qualifications for the Indianapolis 500 auto race at Indianapolis Motor Speedway in Indianapolis, Saturday, May 22, 2021. (AP Photo/Jamie Gallagher)

INDIANAPOLIS (AP) — Beth Paretta listened intently to the sounds of Indianapolis Motor Speedway and took her cues from the crowd each time Simona de Silvestro hit the track in Saturday qualifying.

When the crowd roared as de Silvestro beat the clock for one final qualifying attempt, Paretta knew her team still had a chance to start this year's Indianapolis 500.

“Watching her go by, I could tell by the sound,” Paretta said. “I knew she didn’t have it on the first lap.”

Paretta Autosport failed Saturday to place de Silvestro in the top 30 of qualifying as female-heavy team made its debut. The Swiss driver, her predominantly female crew members and the trailblazing owner will be among five teams vying for the final three spots in the race Sunday.

Each time, her four-lap averages were too slow. The team will now search for speed solutions for a problem that became apparent Friday.

De Silvestro said she was “super happy" with how the No. 16 Chevrolet performed in practice — until series officials turned up the horsepower to increase speeds. The change threw off the car's balance and the speed has lagged.

“It's really strange, maybe we changed too much," de Silvestro said. “I think I'll spend the night doing a lot of video watching and going through a lot of data. We' have one hour to put it in the show and we need a clean run."

She's not the only one.

Rookie RC Enerson, Sage Karam, Charlie Kimball and 2018 Indy winner Will Power all struggled Saturday and will come back Sunday looking to qualify for the May 30 race.

But her final attempt of the day that caused consternation in three different places around Gasoline Alley.

While Power waited anxiously in line for a chance that never came, A.J. Foyt Enterprises president Larry Foyt worried that his team's strategy of withdrawing Dalton Kellet's speed and requalifying may have backfired when de Silvestro pulled out of pit lane with 8 seconds to go.

She ended up 0.853 seconds slower than Kellet.

“You're given one minute to leave and I believe we used as much time as we could with just enough left in case he stalled," Foyt said. “I was very nervous because she has great people over there and I know the engineer very well. I feel for him because I know he's probably gutted right now.”

Foyt and Peretta spent the next four laps waiting, watching and listening.

“It's racing, it's Indy," Peretta said. “It's nothing we didn't anticipate could happen."

The risk of making additional attempts didn't pay dividends for too many drivers, and in the case of Alex Palou, it proved costly when he crashed the No. 10 Honda in the second turn during his second qualifying attempt.

Palou had already qualified for Sunday's pole shootout when he made his second qualifying run. But as he tried to improve his seed, the Spaniard spun hard into the outside wall in the second turn.

“Already in turn one I could feel like the car was not 100%," he said. “But, yeah, I thought I could handle it and because I had just two more laps. But yeah, I couldn’t. Super, super, super devastated for the team. They did an amazing job for the four cars to get up front. It was an easy fast nine car, and maybe an easy pole fighter for tomorrow. I made a mistake and I learned from it."

It doesn’t matter how much Scott Dixon and Tony Kanaan have accomplished in their driving career, the Ganassi teammates were still nervous as they prepared to qualify.

Dixon was the first of 35 drivers to make his run and his four-lap average of 231.828 was still No. 1 when the six-hour session ended. But he said he was shaking in the team transporter when he tried to pull on his socks.

“It’s a big deal, right? You’re rolling out, the first time you go into turn one at 240 mph, you’re hoping you’re going to come out the other side in one piece,” Dixon said. “T.K. and I were actually getting changed before we came out to qualifying and he’s like ‘Hey man, do you still get nervous?’ I’m like, ‘Dude, I’m really nervous'.”

Now at age 46, Kanaan is the oldest driver in the field. But experience doesn't make qualifying weekend any easier.

“It’s worse for me now. Every year that goes by, it’s worse,” Kanaan said. “When you don’t know a lot, I think it’s actually better. Over the years, I think the pressure builds up more, at least for me.”

One year after winning Indy's pole, Marco Andretti struggled to make the field. He's complained about his slow car all week and things looked so bleak initially that the third-generation racer feared he might not qualify.

Andretti was the slowest qualifier for a long portion Saturday.

“It doesn’t matter what we do mechanically. A slow car is a slow car,” he said after his first run. “I knew we were slow, but I didn’t think we were this slow.”

He eventually moved up the board to 25th with a stronger run. Andretti stepped away from full-time racing this season but is back for his 16th 500 start, the only race on his calendar.

“Didn’t matter what we did to the car it went the same speed,” Andretti said. “Literally. To the hundredth. Wasn’t for a lack of trying.”

It was a mixed day for Andretti Autosport, which locked all six of its cars into the top 30 but the entries were all over the map. Colton Herta and Ryan Hunter-Reay both qualified for the pole shootout. At 21, Herta is the youngest driver in the Andretti lineup while Hunter-Reay, 40, is the oldest.