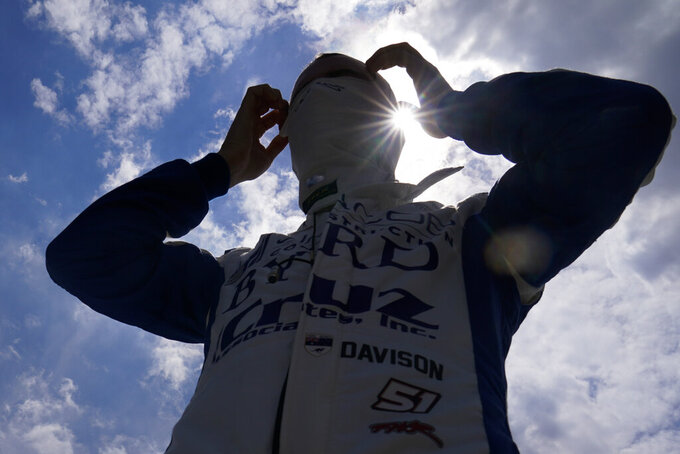 INDIANAPOLIS (AP) — James Davison would do almost anything to go racing full-time again — even pulling double duty at two of the sport's most iconic venues with an injured heel.

This weekend, the 33-year-old Australian just might get his chance.

After attempting to qualify Saturday for the Indianapolis 500, Davison plans to sit down with team owners Dale Coyne and Rick Ware, study Sunday's forecasts and decide whether he should stay in town for practice or go to Daytona and compete in the NASCAR Cup Series race.

“We'll have to make kind of an executive decision," Davison said. “You know the Indianapolis 500 is the Indianapolis 500 and we've got nearly 10 more Cup races left on the schedule. But this is our time to shine, and we want to put ourselves in the best position to win it."

No, it's not the traditional double the late John Andretti pioneered in 1994 — competing in Indianapolis and the Coca-Cola 600 on the same day in May. But in an unprecedented season, which included moving the 500 to August with empty grandstands, Davison's busy weekend might be the next best thing.

The choice sounds simple — focus on race setup for the Aug. 23 IndyCar showcase or chase points on Daytona's road course.

Davison suffered second-degree burns on his left heel at New Hampshire during his third start of the Cup season. He finished 30th in his debut with Ware's NASCAR team but the injury caused enough discomfort that Davison was walking around Gasoline Alley this week in sandals.

And, of course, there's always the weather. Sunday's forecast is calling for temperatures in the low to mid 80s with a 20% chance of rain.

But everyone involved in the decision-making process also understands what a strong Indy performance could mean for their teams, their sponsors, even Davison.

“It's obviously a unique opportunity, where I'm racing in the two major racing series in the U.S., and the way we're going in NASCAR is not the best way to shine ," Davison said. “We're with one of the smaller teams and with COVID-19, we've had no practice and we're running on ovals I'm not familiar with. So I'm trying to go in with the mindset that we're racing against guys in the same equipment and I need to gain more stock car experience."

Still, Davison acknowledges it's a better position than he's been in years.

When he finished 2009 as the Indy Lights runner-up, the then-22-year-old looked poised to become one of IndyCar's most promising young drivers.

Instead, he spent the next decade hunting for jobs, chasing sponsors and bouncing from team to team and series to series. The closest he came to a regular ride was 2014 when he started 10 of 15 races in sports cars.

So when he was offered 10 races on the Cup side, Davison jumped.

“I'd like to think I'd do a full season next year," he said. “I love IndyCar racing but I've been trying to get a full-time ride for 10 years and I've never had the sponsorship. So it would most likely be with Rick Ware."

Admittedly, like so many other open-wheel drivers though, Davison isn't ready to give up on Indy and neither is his team.

Davison had made five starts in the 500 since 2014, twice from the 33rd and final spot in the field. Yet his finishing spot has been better than his starting position in four of those races, including a career-best 12th last year with Coyne's team.

Where exactly does Davison fits in this year's qualifications remains unclear.

He was 10th on the speed chart after the first two days of practice with a fast lap of 224.315 mph. Series officials gave each car drivers a horsepower boost Friday, Davison was 26th with a top speed of 229.776.

The good news: He's using a Honda engine, which had 13 of the top 15 spots when Fast Friday practice ended. And if Davison finds enough to make Sunday's nine-car pole shootout, the decision would be easy.

“I think what the weather looks like here Sunday probably will be the thing," Davison said. “So it's a little bit TBD. But we don't want our 500 practice to be compromised, so we'll need to make an executive decision."