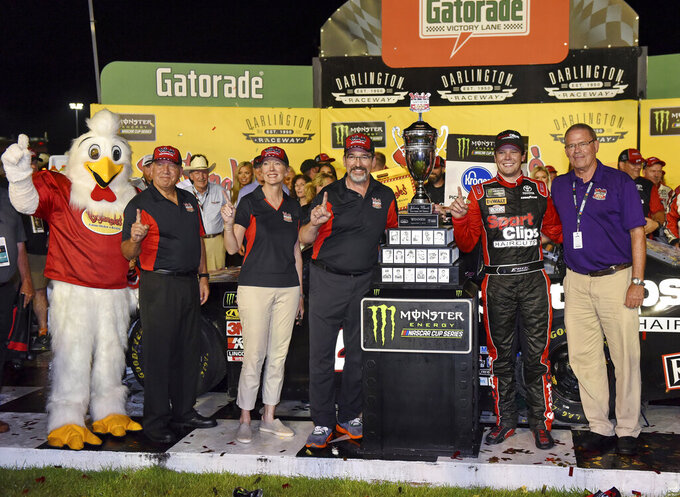 DARLINGTON, S.C. (AP) — Erik Jones used every bit of stamina he had at Darlington Raceway. Few know better than Jones the effort it took to hold off Joe Gibbs Racing teammate Kyle Busch and win the rain-delayed Southern 500.

Jones took the lead from Kyle Larson 85 laps from the end and stayed in front of Busch the rest of the way to add a win at iconic Darlington Raceway with his first NASCAR Cup Series victory at Daytona in July 2018.

"It's pretty crazy, right," he said. "I'm not a hugely emotional guy, but to get a win here means a lot to me."

Some had wondered if the 23-year-old Jones was the soft spot in the JGR powerhouse as Busch, Denny Hamlin and Martin Truex Jr. had all won four times apiece this season while Jones' No. 20 was winless.

"Is there anything more to say?" Jones asked as the crowd cheered.

Not anymore. Jones' victory means all four of Joe Gibbs' drivers has taken the checkered flag and are locked into the NASCAR playoffs that start in two weeks.

"It takes a lot to beat them," Jones of his teammates. "Especially when you're racing the same equipment."

To have the win come at Darlington made it even more special for Jones.

"This is one of those races for me that has always held a special place. You think of NASCAR, you think of Darlington," he said.

Larson was second, his third top three finish at Darlington in the past four years. He led 497 laps during that stretch, including 44 in this one.

Busch, who started in the back after swapping out an engine after qualifying, got up to Jones' bumper near the end. But he brushed the wall on the next-to-last lap and ended third.

"We kind of lost control that pit stop where we came in the leader and came out third," Busch said. "I thought if we could keep in touch with (Jones and Larson), keep close to them, we might be able to out-pit road them at the end of the race. We got by one of them, but not the other one. But overall, good day."

Kevin Harvick was fourth and Brad Keselowski was fifth.

PLAYOFF STREAK: Jimmie Johnson made some headway on his quest for a 16th straight playoff appearance, but was hindered when he was caught up in a final stage crash that bumped him back to 16th at the Southern 500. Johnson trimmed his playoff deficit from 26 points to 18. Still, he'll likely need a win in Indianapolis next week to qualify for the postseason.

"We're running out of days and if we miss it, it's going to be by a few (points) I believe," Johnson said. "I can look back over the first half of the season and see a lot of races where we gave away a few points."

He was caught up in that final-stage accident and wound up 29th, his second-worst placing of the season. On Saturday, Hamlin crossed the line first in the Xfinity race, but was disqualified when his car failed post-race inspection.

RAIN DELAY: Heavy storms Sunday delayed the start by more than four hours. Drivers were going through introductions shortly before the scheduled 6 p.m. start when skies got dark and heavy rain began. Crews covered up cars and racers grabbed umbrellas as they headed back through the garage areas to wait out the storm. Darlington earlier announced it had sold out its reserved seating. Most fans also sought shelter, although some stayed out. One was interviewed on the NBC Sports broadcast by NASCAR driver Clint Bowyer.

"You have to explain yourself son," Bowyer asked, wanting to know why he was out there in the rain.

When fan told him he came to see a race and didn't care about the wet weather, Bowyer shouted, "That, ladies and gentleman, is a race fan."

At one point, drivers Bubba Wallace and Corey LaJoie came out on the wet track to throw a football with fans in the stands.

REASON TO RACE: NASCAR spokesman Matt Humphrey said officials took many factors into consideration in starting the race after 10 p.m., including the sell out at Darlington and the approach of Hurricane Dorian toward South Carolina's coast. South Carolina Gov. Henry McMaster ordered evacuations of coastal counties for Monday that included lane reversals on roadways in the area.

Humphrey said the storm's approach was a factor for leaders deciding whether to race or postpone. He said the biggest reason was that NASCAR runs races on the day that it's scheduled if at all possible.

UP NEXT: The Cup series ends the regular season at Indianapolis Motor Speedway. Brad Keselowski won the event on a Monday after all weekend on-track activity was cancelled by rain.