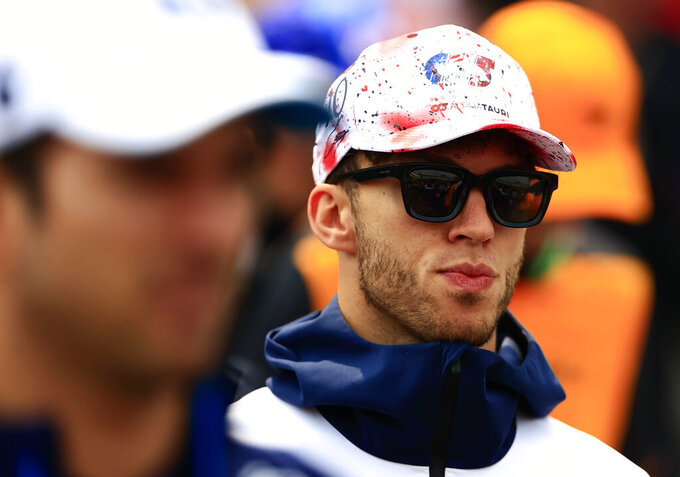 AlphaTauri driver Pierre Gasly, of France, looks on prior to the start of the Formula One Mexico Grand Prix auto race at the Hermanos Rodriguez racetrack in Mexico City, Sunday, Oct. 30, 2022. (Carlos Perez Gallardo/Pool via AP)

SAO PAULO (AP) — Some Formula One drivers are frustrated with the sport's penalty points system after stricter rules for this season have put them at risk of earning a race ban.

AlphaTauri driver Pierre Gasly is only two points short of getting a ban and said Thursday that puts him in a tough position going into this weekend's Brazilian Grand Prix. Gasly tops the list with 10 penalty points and a driver has to sit out a race if he earns 12 points in a 12-month span.

“I am not going to lie, it is a very unpleasant situation and quite delicate. In some ways a bit embarrassing to be standing in a position where I could be banned for a race after the season I’ve done,” Gasly said.

Two weeks ago at the Mexican Grand Prix, Gasly was penalized for leaving the track during a battle with Lance Stroll of Aston Martin. His final race for AlphaTauri will be the season-ender in Abu Dhabi Nov. 20 before hi joins Alpine next season.

Gasly called on F1 to ease the regulations, an opinion that was supported by several other drivers.

“The way that the regulation is written at the moment is quite strict for the drivers, with quite harsh penalties, even though not all are related to dangerous driving,” Gasly said. “There has been a lot of discussion to try to find a solution."

The 26-year-old driver also said he will be extra cautious at Interlagos to “avoid ending up in a silly situation” where he is banned.

“That would be terrible for myself and definitely not the way that I’ve seen the sport growing up. I don’t think that’s the correct approach,” said Gasly, who is in the 14th position in the drivers’ championship with 23 points.

The penalty points system was introduced in F1 at the start of the 2014 season, but no driver has yet collected the 12 points needed for a ban.

This year, though, stewards have applied the rules more strictly than when they were first introduced. In addition, the number of races has increased from 19 in 2014 to 22 in the current season.

Alfa Romeo driver Valtteri Bottas said “there’s been good discussions” with the FIA about the penalties.

“I don’t think Pierre deserves to be in that kind of situation. On the edge,” said Bottas, who is in 10th place in the drivers’ championship with 47 points. “That is the rule now, but the main thing is how we act with that in the future.”

Williams’ Alexander Albon said some of the punishments he received this season were fair, but not all. He has picked up seven penalty points since March.

“We need to do something about it,” Albon said. “And I do understand you should punish drivers if they do dangerous things.”

Gasly, Albon and Bottas said at their joint news conference that drivers and racing’s governing body FIA will talk about the issue this weekend in Sao Paulo.

“So we are discussing it and I think there is going to be a change. But we’ve already got the points on our license, so what happens then?” Albon asked. “Even if we do make steps forward into next year, do the points we have got from previous races stay on?”

Haas driver Mick Schumacher, who only has one penalty point in the season, is one of the few not to criticize the current system.

The German driver, currently in 16th position in the championship with 12 points, is yet to secure a seat in the series next year.