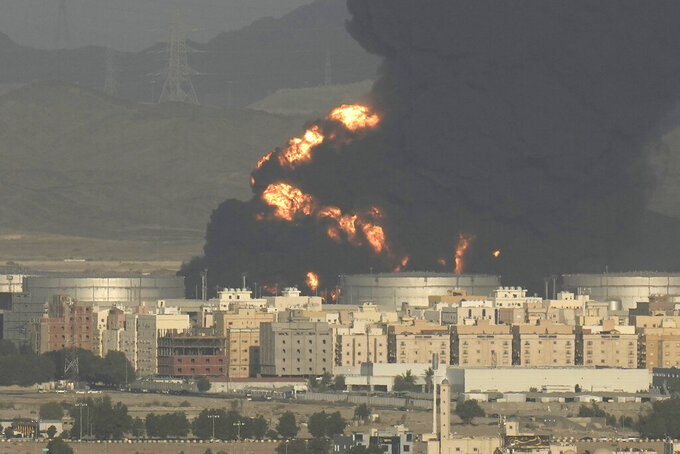 JIDDAH, Saudi Arabia (AP) — Hours after Formula One drivers voiced concerns about a race already dogged by human rights issues, Saudi Arabia's war with Yemen landed on F1's doorstep when Houthi rebels attacked an oil depot near the gleaming Saudi track where they were racing.

Yemen’s Houthi rebels targeted the same fuel depot that was attacked in recent days. The North Jiddah Bulk Plant is only about 11 kilometers (seven miles) from the track hosting the Saudi Arabian Grand Prix for the second time.

The attack happened during the first practice and didn't stop the second, delayed by only 15 minutes. The track promoter and F1 said the third practice and qualifying scheduled on Saturday, and the race on Sunday, will go ahead.

The attack came two weeks after 81 people were put to death in Saudi Arabia in a mass execution, which earlier Friday was a major talking point for seven-time F1 champion Lewis Hamilton and other drivers.

Hamilton said the responsibility for holding the kingdom to account over human rights shouldn’t fall on the drivers but he would try to help.

“It is naturally a very, very complex situation. But I’m always open to having a discussion, to learning more, to try to understand why the things that are happening are happening,” Hamilton said. “Because it’s 2022, and it’s easy to make changes. But I’m open to doing that.”

Hamilton won the inaugural Saudi Arabian GP in Jiddah in December, the second-to-last race of last season. When the 81 people were put to death in a mass execution on March 12, it was the largest in the kingdom’s modern history.

“Ultimately, it’s the responsibility of those that are in power to really make the changes and we’re not really seeing enough,” the Mercedes driver said. “So we need to see more.”

According to Reprieve, a non-profit which defends people facing human rights abuses, and partner organization the European Saudi Organization for Human Rights, a further 16 executions have been carried out since the mass executions on March 12.

“It’s obviously mind-blowing to hear the stories. I’ve heard there’s a letter been sent to me, for example, by a 14-year-old who’s on death row,” Hamilton said Friday. “We don’t decide where we go (but) I think we’re duty bound to try and do what we can while we’re here.”

Saudi Arabia is one of several countries accused of “sportswashing” human rights abuses by using high-profile sporting events to project a favorable image. Others include Bahrain, which held the opening F1 race of the season last weekend, and Qatar, which will host soccer’s World Cup this year.

Daniel Riccardo said F1 drivers can use their platforms for change, including meeting with people in the country.

“If speaking to, let’s say, a group of people could help, then why not? I think for now the best thing is to remain open-minded,” the McLaren driver said. “We’re aware there is room for change here and if participating in certain things helps, then I think we’re very open to do so.”

As for skipping the race altogether, Ricciardo said he thinks drivers are better placed to come and compete.

“We’re aware of some of the situations when we come here,” he said. “We also have a chance to create some change and have some positive influence, as opposed to not coming here.”

Valtteri Bottas, Hamilton’s former teammate, said drivers “don’t really have a choice” on where they go.

“If we could choose races, maybe we would change the calendar a bit,” the Alfa Romeo driver said.

When F1 terminated its contract with the Russian GP this month after that country’s invasion of Ukraine, drivers agreed it was the right thing to do. Four-time F1 champion Sebastian Vettel said he wouldn’t have raced there if it had gone ahead.

The Saudi Arabian GP will go ahead as scheduled on Sunday.

“You can’t ignore these facts,” Mercedes driver George Russell said. “I just hope that with our platform we are raising the right awareness, and we can have a positive change in the long run.”

Friday's attacks came as Saudi Arabia still leads a coalition battling the Iran-backed Houthis, who seized Yemen’s capital of Sanaa in September 2014. The kingdom, which entered the war in Yemen in 2015, has been internationally criticized for its airstrikes killing scores of civilians.