Ferrari's struggles unlikely to end at home race at Monza 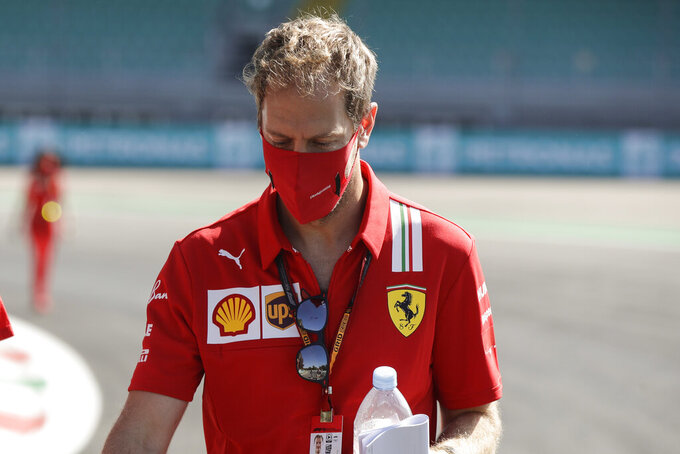 Ferrari driver Sebastian Vettel of Germany walks at the Monza racetrack in Monza, Italy, Thursday, Sept.3 , 2020. The Italian Formula One Grand Prix will be held on Sunday. (AP Photo/Luca Bruno) 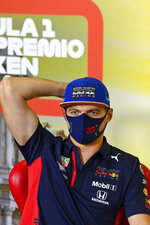 Last year Charles Leclerc was cheered by thousands of passionate Ferrari fans at Monza after he ended the team's nine-year wait for victory at its home circuit.

Fast forward 12 months and things will be very different at Formula One’s Italian Grand Prix and not just because of the lack of fans because of the coronavirus pandemic.

Ferrari’s bad year is getting worse as each race goes by. Leclerc finished 14th at last weekend’s Belgian Grand Prix, just behind teammate Sebastian Vettel. Both were over a minute behind race winner and championship leader Lewis Hamilton.

“No miracles expected this weekend but hopefully we can be a bit better than we were at Spa,” Leclerc said at a news conference on Thursday.

Vettel is a four-time champion but has not even finished in the top five this season — and has been 10th or lower in four races.

“I’m not going to lie it’s not going to be an easy weekend for us,” Vettel said. “I think it’s very difficult to expect a big change from last weekend. Having said that though, last weekend we were a little bit worse off than normal so I hope we can be back to normal.

Team principal Mattia Binotto seems at a loss on how to turn things around at the once-dominant Ferrari and said recently that it could take years before it is back in a winning cycle.

Vettel will not be there for that as he is leaving at the end of the season but Leclerc is under contract until the end of 2024.

The promising 22-year-old was asked whether he had the patience to wait for Ferrari’s return to the top.

“On the one hand I don’t really have the choice,” he said with a small laugh. “But yeah surely it will take some patience and I’m ready to wait but its also my job to try and make this process as short as possible and for us to come back where we deserve to be.

“It’s not going to be easy, it will take time but I’m ready for this.”

Leclerc and Vettel are both more than 100 points behind Hamilton in the standings after the British driver cruised to his fifth win in seven races on his inevitable march towards equaling Michael Schumacher’s record title haul.

Hamilton and his all-conquering Mercedes machine are in a class of one this season, and his emphatic victory at the Spa-Francorchamps circuit marked the 89th of his career, taking him to within two of Schumacher’s victory record. He is on course to win a sixth championship title in seven years, and seventh overall.

Verstappen managed to beat the Mercedes duo at last month’s 70th Anniversary Grand Prix at Silverstone but admits his chances of doing the same at Monza are slim.

“It isn’t normally our best track with all the long straights but last year in practice we were quite competitive in practice before taking a penalty so let’s hope that it is going to be the same again this year,” he said. “Spa was my sixth podium in a row so hopefully we can keep this streak going and soon fight for first instead of second and third but that might not be the case here. Of course we keep pushing and we don’t give up but we have to be realistic that Mercedes are still the favorites.”