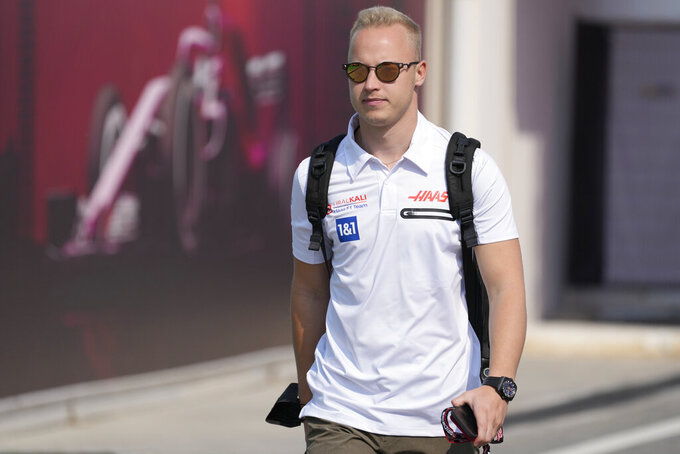 FILE - Haas driver Nikita Mazepin of Russia arrives to the Losail International Circuit in Losail, Qatar, Thursday, Nov. 18, 2021 ahead of the Qatar Formula One Grand Prix. Auto racing's international body, the FIA, said Russian drivers like Nikita Mazepin can still compete but a block on having cars in national colors would stop Mazepin's team Haas bringing back the Russian flag-stripe livery it removed during last week's testing. The Russian Grand Prix was cut from the calendar on Friday. (AP Photo/Darko Bandic, File)

BRUSSELS (AP) — Fired Formula One driver Nikita Mazepin has been added to a list of people sanctioned by the European Union in the wake of Russia’s invasion of Ukraine because of his father's connections to the Kremlin.

In addition to the already adopted measures targeting president Vladimir Putin himself, Russia's financial system and the country’s high-tech industry, the EU imposed travel restrictions and an asset freeze on an extra 160 individuals, including Mazepin and his father Dmitry, the owner and chief executive of the mineral fertilizer company Uralchem.

According to the EU, Dmitry Mazepin is a member Putin's “closest circle” and Nikita was a “natural person” to add to the list because of his connections to his father.

The EU said Dmitry Mazepin met Putin on Feb. 24 alongside 36 other businesspeople to discuss the impact of Western sanctions on Russia.

Earlier Wednesday, Nikita Mazepin said he was shocked at losing his Formula One ride and that he will create a foundation to help athletes excluded from competition as a result of Russia’s invasion of Ukraine.

Mazepin was fired Saturday by Haas F1 when it terminated its contract with both the driver and sponsor Uralkali.

“I did not expect Haas would break the contract with me. I didn’t see it coming," Mazepin said Wednesday in a virtual news conference. “It was a very painful and unexpected situation for me."

Formula One had already terminated its contract with the Russian Grand Prix, and Mazepin said Haas informed him of his firing through an attorney.

“There has been no legal reason for the team to terminate my contract. I lost my dream,” Mazepin said.

Haas on Wednesday said its two cars have arrived in Baharain for this week's test and reserve driver Pietro Fittipaldi will be in Mazepin's seat Thursday. Hours later, Haas said it had signed Kevin Magnussen to a multi-year deal to return to the team.

Mazepin said he was left reeling by his firing but avoided direct questions about Russia's invasion of Ukraine. He said his views are “on many more levels” than outsiders, and that he learned of his firing at the same time Haas made its official press announcement.

Motorsport’s governing body FIA has banned Russia from all international events but allows individual drivers as neutrals without their national symbols, flags, colors and anthems. The season begins March 20 in Bahrain and the FIA said drivers must sign its principles of peace and neutrality and “to stand in solidarity with the people of Ukraine.”

Mazepin said he would have signed it but added that he was looking into further clauses of the document when he was fired. Daniil Kvyat, another Russian driver, has not signed the document and there's been indication he will not be permitted to compete in the upcoming World Endurance Championship season that begins next week in Sebring, Florida.

Mazepin said he only would have signed the document in order to compete but there is no point now that he has no job. He also opened his news conference with a statement about the war, but did not condemn Russia's actions or answer whether or not he can be viewed as a neutral athlete considering his father's relationship with Putin.

“Those who don’t live in this part of the world, or were not born here, will only see a part of it. Those of us in Russia or Ukraine see it on many more levels,” he said. “I have friends and relatives who have, by force of fate, found themselves on both sides of this conflict.

“Regarding the conflict that is ongoing, I have stated my views and my position. There will be no more information.”

Uralkali is considering legal action against Haas for terminating the sponsorship contract. The company said money it would have spent with Haas will instead fund Mazepin's foundation called “We Compete As One” — a riff on F1's “We Race As One” inclusion motto.

“The foundation will allocate resources, both financial and non-financial, to those athletes who have spent their lives preparing for Olympics or Paralympics, or other top events, only to find that they were forbidden from competing and collectively punished just because of the passports they held,” Mazepin said.

Jobs and legal and psychological aid will be provided.

“No one is thinking what happens next to these athletes," he said. “This will include athletes from all conflict zones. Our door is open to everybody. We will begin with the Paralympic team from Russia, which was banned from the Games in Beijing having first been told they could travel.”

Although Mazepin said he received messages from four current F1 drivers, former teammate Schumacher was not among them. Schumacher is the son of seven-time F1 champion Michael Schumacher and he and Mazepin did not have a close relationship in their one season as teammates.

“Mick Schumacher did not express anything positive or negative. In situations like this you can see the true face of everybody around you,” he said.