At a glance: Another wave of disruptions hits sports 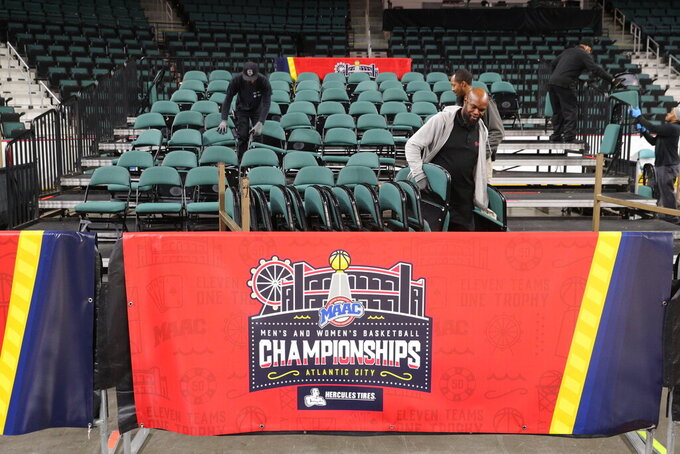 Sports was hit by another wave of disruptions Thursday because of the new coronavirus. A look at the latest developments:

The NCAA canceled the men's and women's NCAA Tournament. The announcement came after the Atlantic Coast, Big Ten, Big 12, Pac-12 and Southeastern conferences said the rest of their tournaments would not be played.

Major League Baseball delayed the March 26 start of its season by at least two weeks and suspended the rest of its spring training schedule. Commissioner Rob Manfred left open whether teams would still play 162-game schedules.

The NHL suspended its season, calling it a “pause.” Commissioner Bettman hopes to resume the season and hold the playoffs.

A day after the league suspended its season “until further notice,” a second Utah Jazz player — Donovan Mitchell — tested postive for the coronavirus.

Major League Soccer shut down for 30 days. Its season started Feb. 29 and each team has played two matches. The U.S. Soccer Federation canceled exhibitions in March and April for its men's and women's national teams. The regional group CONCACAF suspended Champions League competition.

The ATP suspended all men's pro tournaments for six weeks. The WTA called off one event in April and would decide on further changes to the women's tour schedule within a week. The International Tennis Federation said its lower-tier events would be on hold until April 22.

IndyCar and NASCAR will race this weekend without spectators. The IndyCar race is on a temporary street course through downtown St. Petersburg, Florida. NASCAR's next two races will be without fans, this weekend in Atlanta, then at Homestead-Miami Speedway. In Formula One, McLaren withdrew from the Australian Grand Prix on the eve of the first official practices after a team member tested positive.

The PGA barred fans from the final three days of The Players Championship at Ponte Vedra Beach, Florida, and the next three weeks leading to the Masters.

The NFL called off its main owners meeting, set for this month in Palm Beach, Florida. NFL teams are curtailing or halting scouting operations as a safeguard.