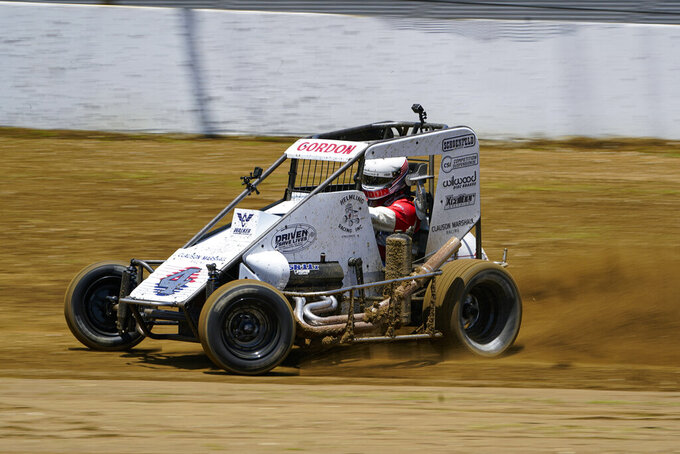 Jeff Gordon, a five-time winner of the Brickyard 400 and four-time NASCAR Cup Series champion, drives through a turn in a USAC midget car during an exhibition on the dirt track in the infield at Indianapolis Motor Speedway in Indianapolis, Thursday, June 17, 2021. (AP Photo/Michael Conroy)

INDIANAPOLIS (AP) — Just a few miles from the home where he spent his teenage years, Jeff Gordon strapped himself into a midget car, was pushed onto the 1/4-mile dirt track in the third turn at Indianapolis Motor Speedway and started turning laps.

“I did this 30 years ago and it's hard to believe it's been that long and to get back in there, it felt unreal," he said Thursday. “Now I want more water on the track, I want to go fast. It's just such a cool car, it takes me back to the time when I was racing midgets and how much I loved them . To be able to slide these cars around and maneuver them on these little bull rings, that was way overdue.”

Clearly, the 48-year-old, four-time NASCAR Cup Series champion remains passionate about racing even if he is sporting a new look. The winner of a record five Brickyard 400s arrived this time in a red, white and blue fire suit and graying temples while driving a No. 4 car, a throwback to his USAC midget championship days.

This was never about rumors Gordon might leave the broadcast booth, the possibility of another comeback or even the desire of IndyCar fans to see Gordon run in the Indianapolis 500.

Instead, Gordon came back to promote this year's BC39 card, scheduled for Aug. 18-19.

The two-day event is named in honor of Bryan Clauson, a dirt track specialist who died at 27 from injuries sustained in a midget car crash in Kansas in August 2016. It's sponsored by Driven2Save Lives, an Indiana group that promotes organ donation.

“I just think instead of the Brickyard being on the oval, the road course, I think they should just bring it over here. I might even come back for that," Gordon joked. “This whole thing is for a great cause, for Bryan Clauson and his memory and being an organ donor and truly saving lives."

Gordon posed for photos with speedway employees and his mother, speedway president Doug Boles and Clauson's father, Tim. Then a small tractor pushed Gordon onto the track and with an assist from a pickup truck, he took his first dirt-track laps in almost 25 years.

It didn't Gordon long to rev up the engines and sending dirt chunks flying toward the concrete wall inside the track he dreamed about as a teen. And this time, he was simply having the time of his life.

“I've not had many bad days in Indianapolis, but this is going to go towards the top," he said. “From my first time racing here, the Brickyard 400, of course the wins are memorable and the F1 swap and then this right up there with them. I'm so thankful to Doug Boles and Tim Clauson for talking me into doing this. I've put it off for way too long. That was the most fun I've had in a long time."