Hall of Famer Jordan set for biggest leap yet into NASCAR 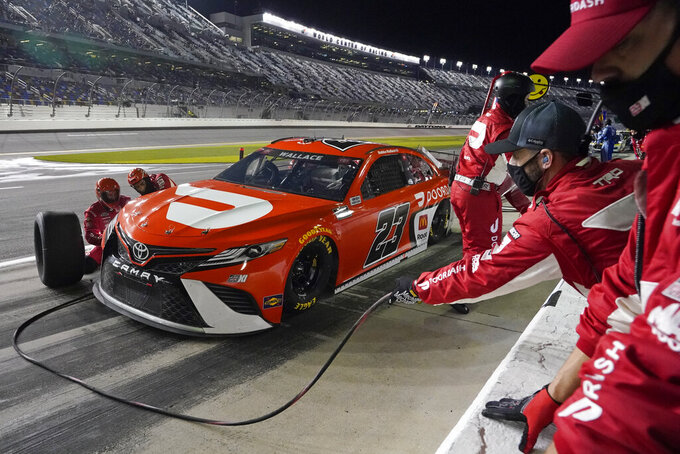 DAYTONA BEACH, Fla. (AP) — Michael Jordan may take his biggest leap yet -- and he’s trying to change the game again.

Jordan enters NASCAR not just as the first Black principal owner of a full-time Cup Series team in nearly 50 years. The Hall of Famer is trying to reach the rarified air of celebrity owners who found crossover success in the sport.

“He’s as excited as he’s ever been, that’s for sure,” said Denny Hamlin, Jordan’s partner at 23XI Racing.

Forget the green flag. NASCAR needs to roll out the red carpet when the Daytona 500 leads off the season Sunday packed with more star power in the suites than on the superspeedway.

Pitbull, who has an ownership stake in Trackhouse Racing, joined Jordan as A-listers in one of the more inclusive and expensive clubs in NASCAR.

Jordan is a close friend of Hamlin and long-time fan of the sport who once said he sets his clock to watch NASCAR every week. Jordan helped launch 23XI Racing with Bubba Wallace as the driver, a high-profile pairing of a Black majority team owner and the only Black driver at NASCAR’s top level. And Wallace is taking the reigns from Jordan's No. 23.

Jordan was scheduled to film a segment for Fox that should air on the pre-race segment Sunday.

Pitbull’s was attracted to NASCAR more from the big screen than the Big One at Daytona.

Yes, it was the Tom Cruise flick of exaggerated NASCAR racing that first pumped Pitbull for the need for speed to the point that he added team owner this year to his lengthy list of monikers that already include Grammy-winner and philanthropist.

Or that Richard Childress yelled “Timber!” with Kesha?

“Mr. Worldwide” sure has, and both the platinum-selling rapper and Jordan have the global superstar appeal NASCAR -- an industry that has strengthened its commitment to diversity -- banked on to broaden its fanbase.

“Michael Jordan has a huge following and that following is now peaking and having an interest in NASCAR,” Hamlin said. “I think that you have a lot of people that have never attended NASCAR races before that will probably go knowing that their favorite guy might be there.”

Pitbull will not only attend his first Daytona 500 as team owner, he will give the command for drivers to start their engines.

“The reason that I got involved in this is because there was a greater initiative,” Pitbull said. “The greater initiative is what we need more than ever, especially in these times, I’ll say it again: One race, one race only, the human race. If we can do it through music, through NASCAR, by entertaining, motivating and inspiring them, then that’s what I signed up for.”

Jordan and Pitbull are the latest boldface names to latch onto motorsports.

Joe Gibbs won three Super Bowls as Washington’s coach before he made the switch to NASCAR and won five Cup championships as the owner of his eponymous race team. Brad Daugherty, a five-time NBA All-Star, is co-owner of JTG Daugherty Racing.

The true celebrities, though, usually only cameo in NASCAR’s world to command the drivers to start their engines or play a pre-race concert. Some have tried -- perhaps enticed by the thrill of competition they couldn’t find in retirement -- to own a share of a NASCAR team.

“I’m far from a celebrity,” Pitbull said. “I’m a hard, hard worker. Big difference. Celebrities will sell anything. I’m not here to sell anything. I’m here to help the culture, help unify, more than anything help motivate and inspire those through my story, through Daniel’s story, Justin’s story, (President) Ty (Norris’) story and NASCAR’s story.”

The list of failures with big aspirations with bank accounts that couldn’t match could stretch around the Harley J. Earl trophy: Yeah, we’re talking about you Troy Aikman, Roger Staubach, 50 Cent, Randy Moss and Jackie Joyner-Kersee.

Hall of Fame Racing was founded in 2006 with some Dallas Cowboys star power. Former Cowboys QBs Staubach and Aikman were part of an ownership group that finished 26th in points in the first season. Terry Labonte, Terry Raines shared the No. 96 car in that first season and HOF Racing finished 25th in the owners’ standings in 2007.

HOF Racing struggled with J.J. Yeley in 2008 and the team finished 39th in the owners standings. Staubach and Aikman left the team at the end of the season and the team was shuttered after 2009.

The team had a technical alliance with Joe Gibbs Racing but was one of many small NASCAR teams squeezed out during the economic crisis.

Moss found it easier to score touchdowns than he did top-10 finishes in the Truck Series. Moss bought into an existing series team in 2008 and renamed it Randy Moss Motorsports. He even changed the truck number from 46 to 81 to reflect his jersey number.

“A guy like Randy isn’t going to make a commitment like this unless he’s really passionate about this and he wants to be successful,” Tony Stewart said at the time.

Moss seemed poised to make it work in NASCAR. He won three races with Mike Skinner in 2009 but the team never won again before it flamed out after the 2011 season and 119 races.

Joyner-Kersee, the Olympic gold medalist widely considered one of the great athletes of all time, teamed with husband Bob Kersee to field an entry in the 2000 Daytona 500. The team had driver David Green entered in the race but withdrew when it was unable to find sponsorship.