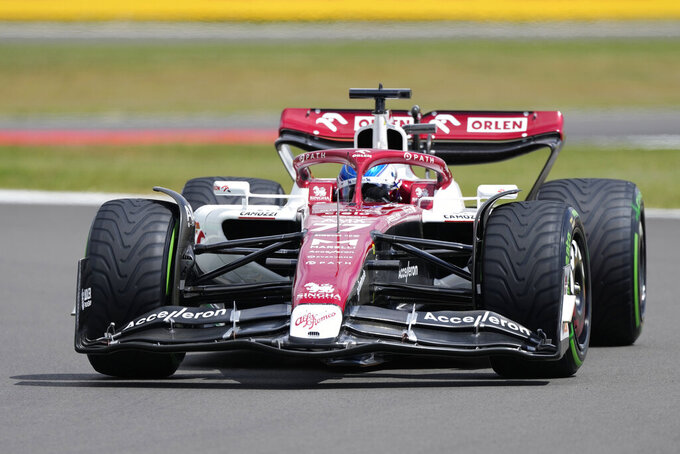 SILVERSTONE, England (AP) — The British Grand Prix this weekend offers Lewis Hamilton a chance to make a statement on and off the track after a buildup dominated by how Formula One deals with racism.

Hamilton indicated he can be among the front-runners after setting the second fastest time in Friday practice.

Hamilton's Mercedes team has struggled badly this season but has reason to hope for an improved performance at Silverstone, where the British driver is an eight-time winner. Unlike recent races on street circuits, the British track has a smooth surface which could reduce the Mercedes car’s tendency to bounce at speed, causing Hamilton back pain.

Hamilton said the team has done “phenomenal" work on upgrading the car for this week's race, where he will be looking for a second straight podium finish after coming third at the Canadian GP.

The seven-time world champion also spoke out this week about improving F1's record on diversity and inclusion, and was supported by F1 and fellow drivers after former champion Nelson Piquet described Hamilton, the series' only Black driver, with a racial slur.

Series leader Max Verstappen, who is in a relationship with Piquet's daughter Kelly, said on Thursday the man he calls his “father-in-law” used a word that is “very, very offensive” but he didn't consider Piquet to be a racist. He added Piquet’s lifetime paddock access given to former F1 champions should not be revoked.

Still winless ahead of his 150th race, Carlos Sainz was fastest in practice.

In the second session, Sainz was .163 seconds ahead of Hamilton and .176 ahead of McLaren's Lando Norris. Verstappen was fourth fastest and Sainz's Ferrari teammate Charles Leclerc fifth.

Sainz has yet to win a grand prix though he has five podium finishes this season. He came close when he was second narrowly to Verstappen in Montreal.

Valtteri Bottas was the surprise leader in the first practice which was affected by rain. Hamilton and Sainz followed. Most drivers did few laps and the times were much slower because of the wet track. A red flag halted the session about a minute before the scheduled finish after Lance Stroll spun his Aston Martin into the gravel.

Rain is likely to be a persistent factor throughout the race weekend, soaking the expected crowd of around 400,000 and potentially shaking up the grid, as it did in Canada.

Hamilton has indicated a solution has been found in his standoff with governing body, the FIA, over his piercings.

The FIA has a longstanding rule barring piercings and jewelry on safety grounds but it hadn't been enforced for years. With a new FIA president, Mohammed Ben Sulayem, and new race directors this season, the FIA said it would implement the rule.

Hamilton initially said he would keep wearing piercings — especially a nose stud which would be difficult to remove — but indicated he'd found a solution.

“We've got so much bigger fish to fry,” Hamilton said. “So I will work with Mohammed and with his team so that we can progress forwards.” The British Press Association reported Hamilton removed his nose stud before the first practice.

British police said on Friday they had information that protesters “may attempt to access the track” during the race on Sunday.

“Going onto a live racetrack is extremely dangerous – if you go ahead with this reckless plan you are jeopardizing lives," Chief Inspector Tom Thompson said in a statement. Northamptonshire Police, whose jurisdiction covers the Silverstone circuit, didn't identify any people or group.

Sebastian Vettel is reaching into F1's past to present a glimpse of its possible future.

The four-time world champion will drive a British racing classic before the race on Sunday, demonstrating the Williams car driven by British driver Nigel Mansell when he won the 1992 title.

Vettel bought the car in 2018 in a nod to his memories of watching F1 as a child in the early 1990s — both he and Mansell won the title with the No. 5 — and has set it up to run on environmentally friendly fuel.

“I'm using the carbon-neutral fuels on Sunday to demonstrate that we can still hang on to our history and heritage and culture and motorsport, but do it in a more responsible way,” Vettel said, promising the new fuel mix won't change the sound of the V10 Renault engine.