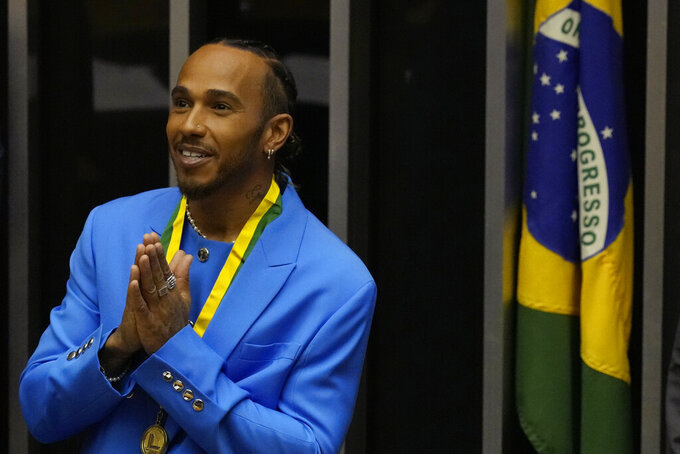 British Mercedes Formula One driver Lewis Hamilton acknowledges the crowd at the Chamber of Deputies during a ceremony where he received the title of Honorary Citizen of Brazil in Brasilia, Brazil, Monday, Nov. 7, 2022. (AP Photo/Eraldo Peres)

Hamilton received honorary citizenship at Brazil's Congress chamber in Brasilia in front of hundreds of raucous fans. He's in the country for the Brazilian Grand Prix this weekend.

Congressman Andre Figueiredo first made the suggestion last November after Hamilton won the Brazilian GP for a third time at Interlagos. The British driver carried a green and yellow Brazilian flag on his victory lap and at the podium to celebrate with local fans.

“It is a great honor to get this title today. Now I can finally say I am one of you,” an emotional Hamilton said during the ceremony, wearing a blue suit and a yellow and green necklace with a Brazilian badge. “I love Brazil, I have always loved Brazil.”

Hamilton has many fans in Brazil due to his F1 skills and his admiration for Brazilian three-time world champion Ayrton Senna, who died in an F1 crash in 1994.

“I want to dedicate this honor to my hero Ayrton Senna,” Hamilton added.

Lower House Speaker Arthur Lira said Hamilton “is a hero for all Brazilians” and “a Briton by birth and a Brazilian by heart.”

“Brazilian role models like Senna and Hamilton make us sure that every Brazilian can overcome challenges and win the races in life,” Lira said. “I hope you return many times to this country that is also your country now.”

The 37-year-old Hamilton has struggled in his Mercedes this season, and has yet to win a race. He's fifth in the championship with two races to go. He hasn't finished as low as fifth in 11 years.

Max Verstappen of Red Bull has already won the championship.