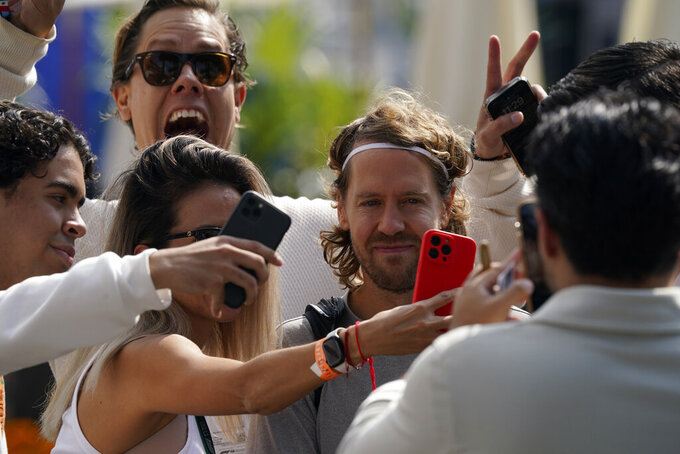 MEXICO CITY (AP) — Lewis Hamilton has just three races remaining to avoid the first winless season of his illustrious Formula One career — a mark that might force other drivers to question if it's time to get out of the car.

Not the seven-time champion.

He has struggled all year in an underperforming new Mercedes and there was some speculation that he would retire after his controversial loss of a record eighth F1 title last December to Max Verstappen. Even so, the 37-year-old wants more.

Hamilton said ahead of the Mexico City Grand Prix that he has started talks with Mercedes on a new multiyear contract. His current contract expires at the end of 2023.

“Each year you have to ask yourself if you’re willing to give as much if not more than you did when you first started. Are you willing to give up all your time to prepare and train and work with the team and deliver?" Hamilton said. "If there’s ever a moment that I’m arriving and I’m just coasting along, then that’s when I don’t belong here, and don’t deserve the position here, and that’s when I should stop. I question myself as to whether I’m able to do that and whether I want to do that, and the answer is yes.

“We obviously have a championship that we need to get back, and I love the mission and that challenge with my team.”

Hamilton, who holds the F1 record for victories with 103 since his 2007 debut season, dominated last year's season finale at Abu Dhabi in a head-to-head matchup with Verstappen for the title. A late caution sent in motion a series of events in which the since-fired race director broke from protocol in his rulings — which ultimately allowed Verstappen to pass Hamilton for both the race win and the title.

Hamilton retreated from public eye for nearly two months amid rampant speculation he would quit the sport. And with all his outside interests — fashion, music, films, social justice issues and a recent investment into an NFL team ownership group — there's enough to do to keep Hamilton busy.

He said he doesn't know what the next five years look like for him, only that he wants the bulk of his focus to remain on racing at the highest level for the next few seasons.

“This is what I am focused on. I am not in a relationship, I don't have any kids. This is my baby at the moment,” Hamilton said.

Hamilton had a one-win season in 2013 but has never struggled like he has this year. Mercedes' debut of its new car exposed multiple problems that Hamilton claims he has enjoyed trying to help fix. But he has just seven podiums this year, including a runner-up finish to Verstappen last weekend in Austin, Texas, and conceded that was likely his last shot to win this season.

He's not ready to give up on Mercedes, though.

“I can’t wait to the time where we get back to success, when we finally get that win, when we get that championship — it’s going to make all of these tough moments worthwhile," Hamilton said.

Four-time F1 champion Sebastian Vettel said in July his 16th season would be his last. As he hits the home stretch of his F1 career, the German has no regrets about his impending retirement.

Not even after a battle last weekend with Kevin Magnussen that showed the 35-year-old Aston Martin driver still has the skills to be on the F1 grid.

“I thought about this decision long and hard and from a lot of angles. I find it’s a bit sad that we tend to swing so much now,” Vettel said. "I see the benefits of having emotions running high and low rather than just being flat, but I think the judging in general, it’s a bit too quick. We create a hype.

“I obviously enjoyed the last two races, last couple of races more than I did maybe some in the mid-part of the season, but they have no impact on the decision. And if anything it’s a great reminder of why I love this sport so much, why I love racing so much.”

Vettel this week is wearing a Red Bull design on his helmet in tribute to Dietrich Mateschitz, the company co-founder who passed away last weekend. Vettel spent two years competing for Toro Rosso, Red Bull’s junior team, at the start of his F1 career before being promoted to the top team at the start of 2009.

“I think it was six of us (last) Sunday on the grid who shared obviously a story with Red Bull or are still sharing a story with Red Bull, as a brand, as a team, with the Junior Team and there’s probably more Formula One drivers,” Vettel said. “I think the impact that Red Bull had on the grid in the last 15 years has been outstanding and probably unprecedented. Dietrich, to me, we had a very good relationship and what I really appreciate today is that it was always eye level, even though he was far more experienced and knowledgeable than I was, especially early on.”

WHAT'S NEXT FOR LATIFI?

Nicholas Latifi will be out of Formula One at the end of the season when Williams plans to replace him with American driver Logan Sargeant.

Despite rumors that Latifi will become the next F1 driver to move to IndyCar — perhaps alongside former F1 driver and Indianapolis 500 winner Marcus Ericsson at Chip Ganassi Racing — the Canadian said he's not sure what he wants to do next year.

“It's all just rumors. I haven’t decided yet from my future,” Latifi said. “I’ve been exploring options and IndyCar is a series I’m considering, for sure but I’ve not decided on anything yet.”

In fact, Latifi is open to sitting out a year if he needs to in order to land the right job.

“I think if the right opportunity in the right series, which again, at this point of time, I can’t say what the right series is because I haven’t made up my mind yet, then it’s definitely still on the table,” Latifi said. “But at the same time, if there’s not an option on the table that I feel is the right one for next year then I’m not necessarily ruling out taking a year to then put something better together for the following one.”

Carlos Sainz Jr. paced Ferrari in a 1-2 finish in Friday's first practice at the Autodromo Hermanos Rodriguez, but the day was lost in the second practice when teammate Charles Leclerc crashed. Leclerc leads Mexican favorite Sergio Perez of Red Bull by two points in the fight for second in the standings.

The first practice session included several reserve drivers for the second week in a row. Liam Lawson was in a car for AlphaTauri, Sargeant again drove for Williams and Nick De Vries was behind the wheel for Mercedes. Alpine used Jack Doohan and Pietro Fittipaldi drove for Haas.

Doohan pulled in early after “anomalies” were found in his engine, while Fittipaldi brought out an earlier red flag after stopping out on track.