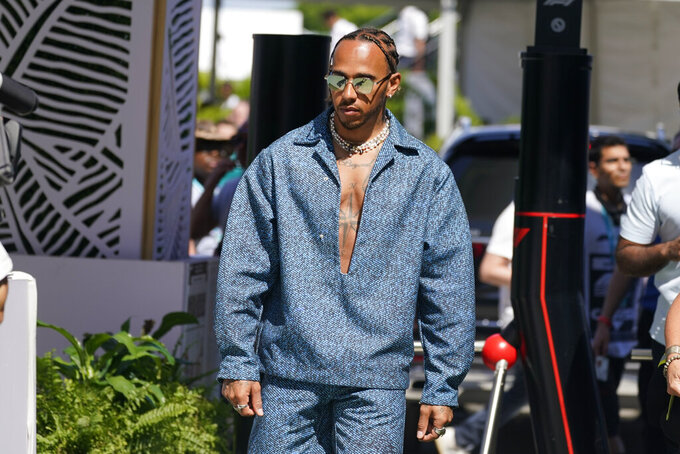 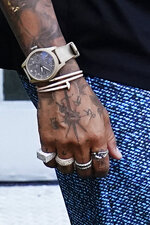 MIAMI GARDENS, Fla. (AP) — Lewis Hamilton dipped into the Roe v. Wade debate shortly after arriving in the United States. He protested a ban on wearing jewelry while racing by sporting three watches, eight rings and multiple necklaces in Miami.

And as the seven-time world champion prepared for Formula One's debut in South Florida, Hamilton hosted former first lady Michelle Obama in his pit for practice and qualifying.

Hamilton remains as much a change agent 16 years into his career as when he became the first Black winner in F1 in 2008. The British racer is now 37 years old, is the winningest driver in series history and is tied with Michael Schumacher with a record seven titles. Hamilton remains the only Black driver at the most elite level of motorsports.

He uses his platform to speak on issues of social justice and race, human rights and protection of the LBGTQ community. Hamilton speaks while racing in countries with questionable human rights records, or when an issue arises in which he feels his voice can lend support.

While in New York earlier this week, Hamilton took to Instagram to speak on the potential Supreme Court decision to overturn the landmark 1973 Roe v. Wade decision and end the nationwide right to legal abortion.

“I love being in the States, but I can’t ignore what’s going on right now and what some in the government are trying to do to the women who live here,” Hamilton posted on his Instagram story to his almost 28 million followers.

“Everyone should have the right to choose what they do with their bodies. We can’t let that choice be taken away.”

The next post included names of organizations and resources that support abortion rights.

Two days later, he arrived in the paddock at Hard Rock Stadium wearing every piece of jewelry he could find. He was protesting a decision by the FIA, the governing body of F1, to clamp down on drivers wearing jewelry while competing. The FIA claims jewelry is a potential safety hazard; Hamilton says he's been wearing his piercings for 16 seasons in F1 and it's his right to express himself as he chooses.

But as the glitz and glamour of F1 invaded Miami Gardens — a suburban family neighborhood that is nearly 70% Black or African American, according to the U.S. Census Bureau — Hamilton was the lone face of diversity. It's not enough, said his boss, Mercedes head Toto Wolff.

“What (F1) needs is role models, not only the top driver, who is the biggest role model the sport has, but we need ... to change that room, there needs to be a more diverse group of people talking about Formula One,” Wolff said. “We just need to take one step at a time. We would love to have a very diverse group of fans and audiences and whatever we can do we are prepared to do.”

Zak Brown, the California native who now runs McLaren Racing, said exposing F1 to a new audience is key. He cited the growth of the North American fan base through Netflix's docuseries “Drive to Survive” to “a new, more diverse youthful fan base."

“If you look at the fan base that they brought in, they brought in a lot of female fans, a lot of youth,” Brown said. "Coming to new markets like Miami and then looking for not just great race broadcasts but side and shoulder programming. It’s about making incremental gains in all of these areas.

“We just need to continue to expose our great sport to people that are new to the sport and then let the sport work its magic on everyone like it has us for many years.”