Hamilton wins British GP to close in on Schumacher's record 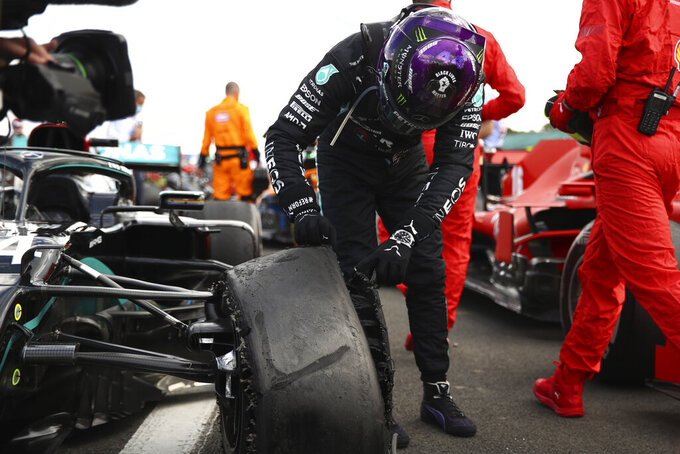 SILVERSTONE, England (AP) — Lewis Hamilton held on to win the British Grand Prix on Sunday despite a puncture on the last lap to clinch an 87th career win and move within four of Michael Schumacher's Formula One record.

With Hamilton so far ahead, Verstappen went in for a tire change in a bid to gain an extra point for the fastest lap but that pit stop ultimately cost him victory because Hamilton's front left shredded with half a lap to go. Verstappen swallowed up most of the 25-second gap but ran out of time.

“I definitely haven’t experienced anything like that. I thought my heart was going to stop," Hamilton said. “Up until that last lap everything was relatively smooth sailing. When I heard his (Bottas' tire) went I looked at mine and it seemed fine.”

"It was a very tricky race," said Leclerc after his second podium of the season. “I am very happy with how I managed the tires from beginning to the end.”

When his tire melted, Bottas had to come back for a tire change and dropped out of the points altogether into 11th spot and 30 points behind Hamilton in the title race after four races.

Sebastian Vettel, a four-time F1 champion, placed 10th and has now failed to get into the top five for his worst start to a season since 2008.

Haas driver Kevin Magnussen and AlphaTauri’s Daniil Kvyat were both unharmed after crashing early in the 52-lap race.

There is another race at Silverstone next Sunday, where Pirelli may modify its tire selection.

Before the race, drivers again wore black T-shirts with “End Racism” written on them as part of an ongoing campaign. This time it was better coordinated than the disorganized scenes two weeks ago in Hungary that angered Hamilton.

They stood behind an “End Racism” message written on the grid, and then 13 of the 20 drivers took a knee, removing their face masks as they did so. The seven others remained standing behind them.

“Thank you for the statement of support to end racism in the world,” was said over loud speaker.

Hamilton set a track record and secured a record-extending 91st career pole and a record seventh at Silverstone on Saturday. Bottas qualified second ahead of Verstappen, who was racing in his 106th GP to equal his father Jos Verstappen's tally. Jos Verstappen was Schumacher’s teammate at Benetton in the 1990s.

Nico Hulkenberg’s race was over before it started as mechanics could not get his car ready because of a power unit problem. He was a last-minute replacement for Sergio Perez, who is in quarantine after testing positive for the coronavirus.

At the start, Bottas got off the line better than Hamilton but held back in the first corner when he had a chance to pass, while Leclerc jumped Verstappen only for Verstappen to overtake him straight back.

Magnussen went out on Lap 2 after contact with Alexander Albon’s Red Bull sent him sliding into the gravel. Magnussen’s front left tire came clean off and the front wing was damaged. The safety car came out for three laps as the track was cleared, while stewards gave Albon a five-second time penalty for causing the incident.

The safety car was out again on lap 13 for a heavier crash, after Kvyat flew off the track at 300 kph (186 mph), sliding backward and sideways into the crash barriers. Mercedes took the chance to pit both drivers for new tires on the next lap, while other drivers followed suit.

Halfway through the race, Hamilton led Bottas by about two seconds and the British driver extended his lead comfortably as another Mercedes 1-2 finish looked certain.

But then Bottas' tire unravelled and — perhaps presuming Hamilton's wouldn't — Red Bull ultimately made the wrong call to go for an extra point rather than bank on Verstappen catching Hamilton in case of a similar mishap.

“You could see (the tire) falling off the rim,” Hamilton said. “I was just praying to get round and not be too slow. I didn’t think I would make it round the last two corners.”

As Hamilton limped over the line, Verstappen was looming large behind him.

Another few hundred meters and victory would have been his.

“It was lucky and unlucky," Verstappen said. “But second is a good result.”

As he was last season, Verstappen looks the only driver capable of genuinely challenging Hamilton.

But he needs a faster car to do so.