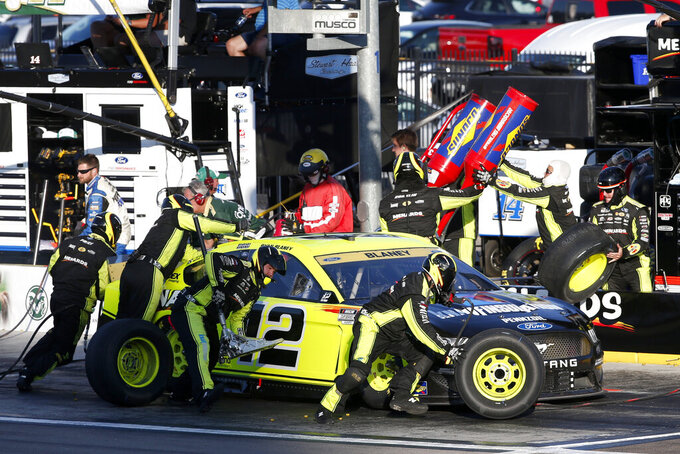 After finally getting his first career victory at Las Vegas Motor Speedway on his 21st try, Hamlin is on an undeniable hot streak he just might ride all the way to his long-sought first NASCAR Cup Series championship.

Hamlin finally broke through in Vegas on Sunday night, holding off Chase Elliott and kicking off the second round of the playoffs with his second win in September.

Three weeks after Hamlin got his first victory of the season in the playoff opener at Darlington, he led 137 laps in Vegas in his Joe Gibbs Racing Toyota, including the final 39.

After a season of frustrating results and a 17-year career filled with championship near-misses, Hamlin has emerged as a serious contender for the title once again. He is just 14 points behind Kyle Larson in the points standings, and he'll have no pressure heading into the high-stakes upcoming races at Talladega and the Charlotte Roval with his ticket already punched for the third round by this Vegas victory.

“It feels so good to win in Vegas,” Hamlin said. “Last couple of times I’ve been close, but just didn’t have the right brakes. Great to hold those guys off.”

The 41-year-old veteran had struggled on this 1 1/2-mile track for most of his career, with just two top-five finishes in his first 18 starts. He has put together three consecutive top-four finishes since then in Vegas, capped by this victory under the lights and fireworks.

“There was a point where I never thought I’d even sniff a victory here,” Hamlin said. “The team has found a setup that has worked with my driving style. The team goes to work to give me what I need to go fast.”

Elliott closed in on Hamlin in the final five laps as Hamlin's performance appeared to decline, cutting the gap to a half-second with two laps to go — but the defending Cup Series champion couldn't close the remaining distance, finishing second in his Hendrick Motorsports Chevrolet.

“We were really close,” Elliott said. “Just not quite close enough. Denny did a good job controlling the gap to me. I feel like we’ve been performing at a really nice level the last four or five weeks. Just haven’t had the results to show for it."

Kyle Busch finished third on his hometown track, followed by Martin Truex Jr. and Ryan Blaney as the 12 remaining playoff drivers began the second round and the final seven races of the season. Hamlin, Busch and Truex put Joe Gibbs Racing in three of the top four spots.

“I just can’t think of a better place to win,” said Chris Gabehart, Hamlin’s crew chief. “Certainly our team has been really capable all year long. Every metric other than the win column has been astounding for our team. It’s really been our best year together thus far. You stay up front as much as we have, the wins are going to finally come. They’re coming at the right time."

Larson finished 10th on the track where he won in March. Kevin Harvick, who scrapped with Elliott over tactics last week at Bristol, finished ninth.

Larson won the first stage, but Hamlin took the second when Larson needed gas and pitted with eight laps to go. Larson got stuck in the midfield in the final stage while struggling with his tires.

Harvick wasn't really in position for any payback on Elliott after the younger driver deliberately slowed Harvick at Bristol last week, ruining his chances of catching Larson. Harvick and Elliott had a vocal public disagreement after that race.

Harvick was still sore about it in Vegas, calling it "probably the maddest I’ve ever been.”

“It was like speaking to a 9-year-old,” Harvick said of his argument with Elliott. “It's identical. It’s 100% the exact same scenario. They get hung up on one thing and you can’t speak to them about the broader picture about the whole thing works."

Hamlin has made the playoffs 15 times, but he came closest to a championship in 2010. He won eight races that year and took a points lead into the season finale at Homestead, only to end up second behind Jimmie Johnson with a 14th-place race finish.

Kyle Busch was strong in his 600th career Cup Series start, and older brother Kurt finished eighth in his 750th career start. The Las Vegas natives have been racing this track on the far north end of Las Vegas Boulevard since it reopened as a 1 1/2-mile oval in 1996.

Only Richard Petty made 600 starts at a younger age than Kyle Busch in NASCAR history.

Joey Gase went to a hospital after a violent one-car crash 92 laps in. His left rear tire flew off the car, sending him high into the outside wall off Turn 2.

Chase Briscoe finished 14th after a long day for a soon-to-be father. He got to Vegas on a commercial flight about three hours before the race after staying behind in Charlotte with his wife, who is due to give birth soon. Briscoe nearly didn't make it to Nevada at all because of a flight cancellation, but American Airlines came through with a backup plane just in time.

UP NEXT: The NASCAR Cup Series playoff race continues at Talladega next Sunday.