Indy 500 drivers eager to crank up power for qualifications 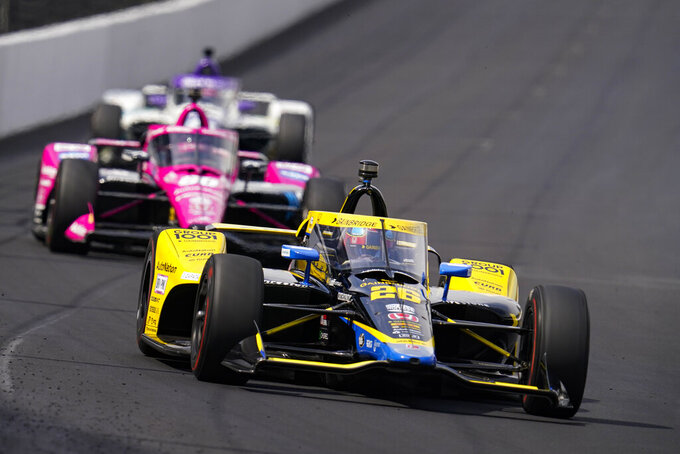 Colton Herta drives into the first turn during practice for the IndyCar auto race at Indianapolis Motor Speedway in Indianapolis, Thursday, May 19, 2022. (AP Photo/Michael Conroy)

The 22-year-old Californian and 32 other drivers entered in this year's Indianapolis 500 will get their long-awaited, three-day power boost, setting them up for qualifying weekend.

“It's a lot more speed, it takes a lot of commitment to hold it flat going into turn one because it's a huge difference pace-wise," Herta said Thursday. “It's always fun. It's always good, and then when they turn it back down it never quite feels the same.”

At practice Tuesday and Thursday, most teams were content to work in traffic on race set-ups and posted fast laps near 226 or 227 mph. Wednesday's session was rained out.

When practice resumes Friday, series officials will add about 90 horsepower to each car — a number that could lead to four-lap qualifying averages in the 230s. The last two pole-winners — Marco Andretti in 2020 and Scott Dixon in 2021 — both topped 231.

But changing weather conditions could make things tricky. Friday's forecast calls for temperatures in the high 80s with afternoon winds out of the south-southwest gusting up to 30 mph.

“Remember Friday is going to be faster, so that amplifies the problems,” four-time race winner Helio Castroneves said during Thursday's telecast.

And with so many variables, there's no assurance Friday's intense practice will provide many clues about how to handle qualifying weekend.

IndyCar owner Dennis Reinbold has been a fixture at the Indianapolis 500 since 2000. This year, with only 33 cars entered, his team is taking a different strategy.

With longtime friends Sage Karam and Santino Ferrucci teaming up for the first time, the drivers with similar racing skills will be working more on qualifying set-up for Dreyer & Reinbold Racing.

There's one other aspect that will help. Karam, who has qualified 31st each of the last three years with DRR, won't have to sweat out Bump Day.

“It’s very cool to know you’re already in,” Karam said. “It's going to be hard to nail it, but I know we’ve got a good team behind us and they'll make sure we’re ready to go.”

Actor and musician Jordan Fisher has been selected to sing the national anthem before this month's Indianapolis 500, race organizers announced.

Fisher is the first Black actor to hold the lead role in the Broadway play “Dear Evan Hansen,” appeared in the Tony Award winning musical “Hamilton” and was ABC's 25th season winner of “Dancing With The Stars.”

His other credits include appearances in “Rent Live,” a variety of television shows, and performing a duet with Lin-Manuel Miranda on Disney’s “Moana” soundtrack.