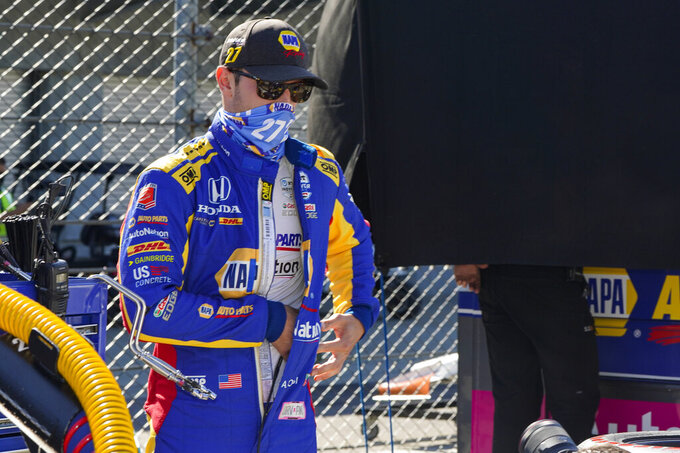 MADISON, Ill. (AP) — Alexander Rossi has conceded the IndyCar championship to Scott Dixon and adjusted his goals toward winning any remaining races this season.

The current IndyCar schedule lists just five races remaining races in a choppy year heavily disrupted by the pandemic. A doubleheader at Mid-Ohio has been postponed but could find its way back onto the calendar.

Even with a full slate, Rossi has waved the white flag on his championship chances. Dixon opened the season with three consecutive wins and heads into a doubleheader at World Wide Technology Raceway outside of St. Louis this weekend with an 84-point lead in the standings over reigning IndyCar champion Josef Newgarden.

Rossi, a title contender the last three years, is 14th in the standings after his own rough start.

“I’m not looking at the championship by any means, Scott's definitely going to win the championship,” Rossi said. “We’re going to try and win races. If we could finish in the top three or four or five, I think that’d be a good recovery considering the way things have gone.”

Rossi's run of bad luck continued at last week's Indianapolis 500, where a pit lane penalty stuck him at the back of the field. Pushing hard to make up ground in a strong car for Andretti Autosport led to a race-ending wreck.

Dixon finished second — his fifth finish of first or second in seven races — to winner Takuma Sato. The Sato victory for Rahal Letterman Lanigan Racing was the first this year for an organization other than Chip Ganassi Racing or Team Penske.

Winning car owner Bobby Rahal acknowledged his organization had spent the year improving its program specifically for Indianapolis, where the team finished first and third with Sato and Graham Rahal. Sato jumped 10 spots in the standings to sixth with the victory and returns to Gateway as the defending race winner.

IndyCar, in an effort to schedule races after the original 2020 schedule was decimated by the pandemic, turned Gateway into a pair of 250-milers. The first race is Saturday, followed by a Sunday afternoon event. IndyCar held one practice session, for 90 minutes on Friday, that was paced by rookie Pato O'Ward.

Will Power was second fastest, followed by Scott Dixon, Conor Daly and Sato.

The weekend marks the final two races on Tony Kanaan's schedule this season. The popular Brazilian was only slated to race on ovals this year and any IndyCar return next season would be in a limited role.