Jarett to become seventh Andretti to run at Indianapolis 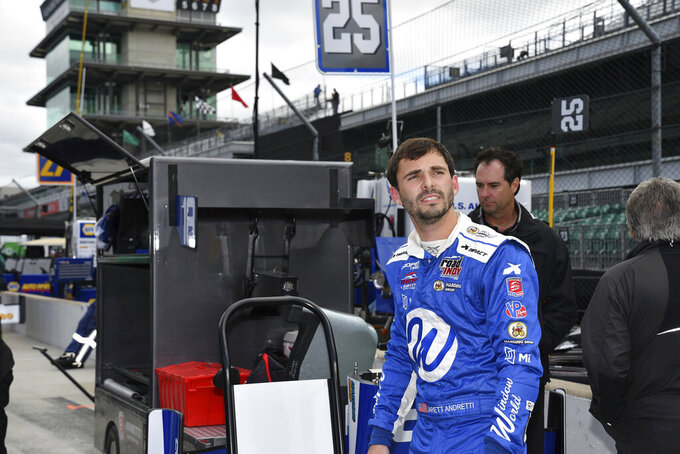 INDIANAPOLIS (AP) — The handsome young man with the easy smile and famous last name had just turned his first laps at Indianapolis Motor Speedway when he grabbed a cellphone to call his father, who was tethered to an IV to receive the medication he hopes will save his life.

"What was it like?" John Andretti asked, upon picking up the phone.

It was the simplest of exchanges coming at the most difficult and complex of times.

The 26-year-old Andretti is making his racing debut at the hallowed speedway on Friday, when the lower-tier Indy Lights series runs the Freedom 100 on Carb Day ahead of the Indianapolis 500. He will become the seventh Andretti to race at the track, and he'll be doing it 50 years after his great uncle Mario captured the family's only victory in the Indy 500.

He also will be taking the green flag while his father, who started 12 times in the Indianapolis 500, undergoes an aggressive clinical trial to treat a return of his colon cancer.

"It's going to be emotional," Jarett Andretti said. "It will mean a lot to our whole family."

That includes his uncle, Adam, and cousins Jeff and Marco, who have all taken the green flag at Indy. His grandfather, Aldo, tested a car there but never competed in a race — he retired early after a bad crash in 1969. John's brother, Michael, has been coming to the great gray speedway his whole life, first as a driver and now as the leader of the Andretti Autosport team.

It will be Michael, who is also Jarett's godfather, who will field an Indy Lights car for him.

"The history of our family speaks for itself and what Indianapolis means to us," John Andretti told The Associated Press. "To have another Andretti participate, it's very gratifying.

"It's the place that you go to make your mark," he said, while sitting patiently through his latest treatment. "Of course, there's good and bad ways to make a mark there. We've all done both. But it's the place you go to be challenged, and this is a big challenge for Jarett."

That's because the latest Andretti took a round-about route to Indianapolis Motor Speedway.

By the time he was old enough to follow his dad to the track, John Andretti had gone from racing open-wheel cars to NASCAR. So rather than playing in Gasoline Alley or within the shadow of Indy's old pagoda, Jarett Andretti grew up going to Daytona and Talladega.

It wasn't until he was a teenager, and John had returned to the Indy 500, that Jarett got to see his first race there. And it left an immediate mark on the wide-eyed boy.

"It was the only time I saw him nervous. The intensity was there more than anywhere," Jarett said. "Then I came to the race and the grandstands are falling down with people, and the allure draws you in, so much of it. And from that point on, this is what you get to."

The seeds of a dream were sowed that day, but they took a while to germinate. Jarett worked his way through go-karts, midgets and sprint cars, often with his dad turning wrenches for him, patiently biding his time. He didn't want to rely on his famous last name for a ride, instead earning it through hard working and a resume built from the ground up.

"We've been talking about it for quite some time, especially with John — he's always had this dream to see his son drive at Indy," Michael Andretti said. "We thought it was time."

John Andretti won't be able to see it in person, though, relying instead on NBC's coverage.

He was first diagnosed with Stage 4 colon cancer in April 2017, and began both chemotherapy and a campaign to encourage people to get colonoscopies. Treatments ended that November and he announced the following march that tests had shown that the cancer was gone.

Two months later, John announced that the cancer had returned and spread to other areas. He began another round of chemo, underwent surgery in January, and is now in the midst of a clinical trial that requires weekly treatments — making it impossible for him to travel.

"I've got three kids that are outstanding in each of the things they're doing. One in medical school, another that's graduating high school. Then I have Jarett," he said, "who when it comes down to it, he and I spent so much time together, just like my father and I.

"I went and spent a day in the life of a medical student at George Washington, where my daughter is going to school, and I know that's not for me," he continued. "We have a special connection because of that. And Indianapolis Motor Speedway is sort of where you have to go, you know, if you're in our family. And just to get to drive around the speedway is a privilege."

Jarett said that his father has taught him a lot over the years, both inside the car and out of it. And the lessons have continued as John Andretti battles cancer once again.

"I could let races bother me for weeks. Something could go wrong and I'd dwell on it," Jarett said, "but now it puts everything into perspective. Whatever happens Friday, the sun is going to come up, in the grand scheme of things. His fight, it's something totally different. The stakes are raised infinitely higher. That puts everything you're doing into perspective."