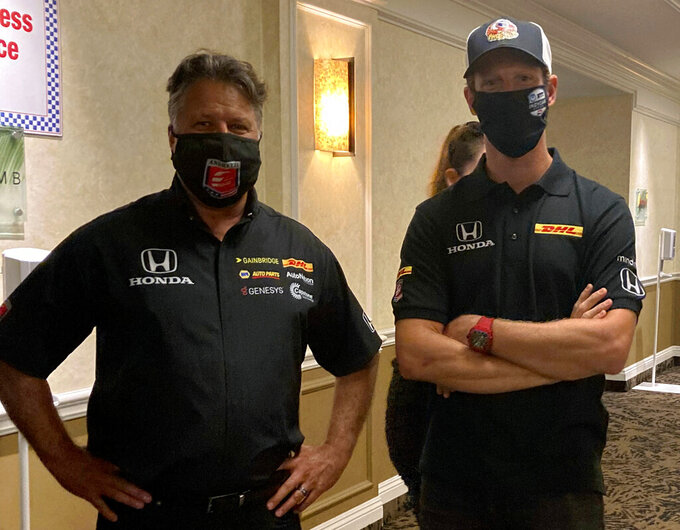 IndyCar team owner Michael Andretti, left, stands with driver Romain Grosjean at the Grand Prix of Long Beach, Friday, Sept. 24, 2021, in Long Beach, Calif. Grosjean was named driver of the No. 28 for Andretti sponsored by DHL beginning next season and will drive the entire season, including the Indianapolis 500. (AP Photo/Jenna Fryer) 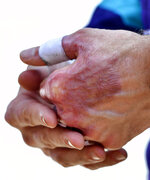 Jimmie Johnson's “childhood dream came true” on Wednesday when he drove an Indy car on the famed Indianapolis Motor Speedway oval for the first time.

Next up the Indianapolis 500?

“I’m as close as I’ve ever been,” Johnson said. “The racer in me is taking a real serious look at this, but I still need to sit down and have that conversation at home.”

Johnson and Romain Grosjean, barely a week removed from their rookie IndyCar seasons, both tested at Indianapolis Wednesday as part of the approval process to race the 500. The rookie orientation program was interrupted several times by rain and was finally brought to an early end before either driver could complete all three speed phases of the test.

Both will be eligible to return to Indianapolis at the next testing session but the drivers “owe IndyCar” more laps before they are cleared for the 500. Grosjean fell two laps shy of completing the program, Johnson was 10 short.

Grosjean and Johnson both moved to IndyCar this season intending to race only the road and street courses on the schedule but it took almost no time for both to reconsider.

Grosjean raced at Gateway outside of St. Louis in August and his 14th-place finish convinced him to commit to a full schedule for 2022. The former Formula One driver left Dale Coyne Racing for Andretti Autosport and made his Andretti debut at Wednesday's test.

He said he hit about 228 mph, just shy of his all-time speed mark of 236 mph he reached at a race in Mexico.

“The question is always ‘How fast is it?’ and it doesn't feel fast because you go in a straight line on a track that is designed for it. And then you go in a corner and yes, you know it is fast and if things go wrong, they go wrong very, very fast. But as long as everything is under control and the car feels good, it just feels normal.”

Grosjean revealed after the test that he initially agreed to do a full season this year with Coyne but changed his mind after his near-fatal fiery crash in Bahrain last November. Grosjean had to pull himself from the fiery wreckage — his hands are heavily scarred — and the scare nearly made him quit racing outright.

“My first reaction was ‘I’m not doing IndyCar at all.' And then a few days later it was ‘Maybe I want to do IndyCar but I don’t want to do ovals,'” Grosjean said. “Then we went to the season and I really felt happy and in a good place in IndyCar so I thought I'd like to do Gateway just to see what it is.

“My wife came and she could tell how great the experience was and how much enjoyment I was having and we knew the next step was to do everything,” Grosjean said. "You can't go in and talk (to a new team) if you're not doing all the races. They want to be fighting for championships, they want to be at the front. I feel comfortable with my decision.”

Johnson, the seven-time NASCAR champion, has had a similar progression. He grew up in California a huge fan of four-time Indy 500 winner Rick Mears and initially pursued a career in IndyCar. His path ultimately led to NASCAR and now at 46 years old Johnson is fulfilling his dreams.

He'd promised his wife after Dan Wheldon's fatal 2011 accident that he'd never run an Indy car on an oval, but his progression this first season helped convince the family to at least give it a try. He'd previously tested at Texas Motor Speedway, where Johnson won seven times in NASCAR, and said he'd return to North Carolina to talk with his wife over a bottle of wine following the test.

Johnson said he doesn't regret skipping the four races this past season on three different ovals but recognizes that had he done them, his rookie season might have progressed faster. While Grosjean scored three podiums and a pole, Johnson's back-to-back 17th-place finishes to close the season where his highest of the year.

“It would have been easier to make this decision a year sooner, but I really had to go through what I did to get comfortable with IndyCar, hit a couple walls. Hitting the wall at 180 at Nashville, as much as I hated doing it, it was a good data point for me,” Johnson said, adding that his family attending IndyCar races and seeing the safety firsthand helped move him closer to trying an oval.

“It’s not that I regret it. It would have been an easier path. But I had to go through this journey on my own.”

Johnson emphasized he still must work out details with Chip Ganassi Racing and sponsor Carvana before he can commit to the 500. His two-year deal with Ganassi included sharing the seat with Tony Kanaan, who is committed to the ovals on the schedule.