Johnson has sights set on bigger, better finishes in IndyCar 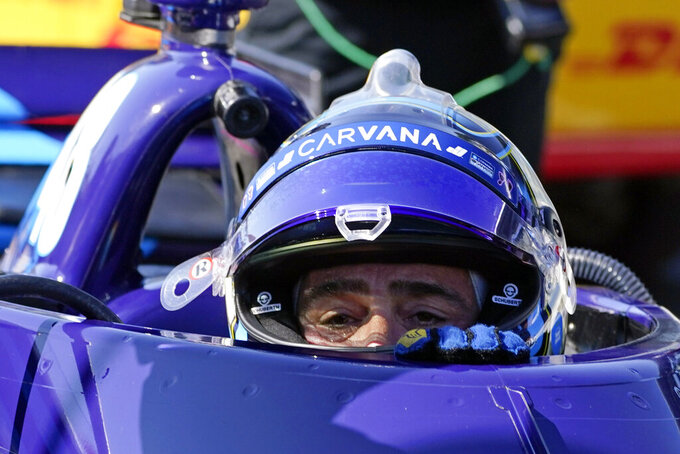 FILE - In this May 14, 2021, file photo, Jimmie Johnson climbs out of his car following practice for the IndyCar auto race at Indianapolis Motor Speedway in Indianapolis. Johnson is hopeful of testing in August at Homestead-Miami Speedway as part of a path toward running in the Indianapolis 500 in 2022. The seven-time NASCAR champion jumped this season to IndyCar and has competed in seven races for team owner Chip Ganassi. (AP Photo/Darron Cummings, File)

NASHVILLE, Tenn. (AP) — Jimmie Johnson dodged tractors and skirted around workers putting the finishing touches on the city-street track on his first laps riding a golf cart through the downtown course.

Heavy machinery and employees failed to make it on the race simulator when Johnson took a seat as he tried to learn the first new street course on the IndyCar schedule in a decade.

The real deal was so much better.

“I have optimism and excitement for a bumpy circuit, a tight circuit, quirky corners,” he said. “I think that stuff makes for better racing.”

Johnson’s optimism runs high for the bulk of his racing future, from his steadfast belief that he can turn the corner in his rookie season for Chip Ganassi Racing to a potential run next season in the Indianapolis 500.

“I’m probably going to be more careful in this decision than anything I’ve done,” Johnson said.

For all the fans, and those in the industry, who clamor to see Johnson conquer the Brickyard in an open wheel car, the seven-time NASCAR champion’s calculated decision to race in May comes down to safety vs. desire.

And he’s still firmly on the fence.

It’s not just the treacherous 200 mph speeds on ovals that force Johnson’s wife and two young daughters to pause as they consider giving him the green light and chase his Indy dream. Johnson’s longtime attorney, Alan Miller, had five drivers killed that he represented at one time in open wheel racing. IndyCar hasn’t had a driver killed since Justin Wilson in 2015 from injuries suffered when he was struck by debris at Pocono. IndyCar has since introduced an aeroscreen that covers the open-air cockpit.

“Now it’s like, wow, that can’t happen,” Johnson said. “It’s helped us. Helped me way more than it helped her. Big picture, yes, she’s trending the same way. But she’s never seen a car run at 200.”

Johnson will get a taste of that speed Sunday coming into Turn 9 of the 2.17-mile track that weaves around the city. He is perhaps the most famous face in the series and was stopped for an autograph and a photo this week by one fan who jumped out of a car in traffic to meet the driver. Johnson got caught up in the hoopla, too, and stretched his arm in front of the pace car and snapped a photo through the windshield of driver Dario Franchitti and a Korean War veteran as they were about to take the ceremonial first lap through downtown Nashville.

He’s soaked in all sorts of new experiences in IndyCar. He’s even tutored Sage Karam, who finished ninth in the Indy 500 as a rookie and seventh this year, as the driver attempts his first NASCAR race later this month in Indianapolis.

He should know how it feels. Johnson spent the last year seeking advice from fellow IndyCar drivers like new teammate Scott Dixon to better make the adjustment from stock cars to open wheel.

“It’s interesting because clearly I’m having my challenges in understanding and adapting to these cars,” he said.

Johnson burst onto the NASCAR scene in 2002 with a fifth-place finish in the standings, was runner-up twice, then blazed his road toward the Hall of Fame with a record five straight championships from 2006-10. He won Cup titles again in 2013 and 2016 before he raced the final three years of his career without a victory, remaining stuck on 83 wins since June 2017.

He’s not against a spot start in NASCAR.

“If a great opportunity came along, I’d definitely look hard at it and probably do it,” Johnson said.

Up first, Johnson will test in August on the oval at Homestead-Miami Speedway as part of a path toward running in Indy.

“I’m running around the back of the pack now on street and road courses, and thinking, ‘Man, if I was on an oval, where would I be?’” Johnson said. “That’s the balance I’m fighting with right now, the risk versus reward during an oval race.”

Johnson worked the Indy 500 as an analyst this year for NBC and got a first-hand look at safety upgrades in the sport.

“I’m becoming much more comfortable with the ovals and with the crash dynamics that take place, with softer walls, the halo, the aeroscreen, the top of the car, and I’m at a point now where in a funny way I’m willing to go hit a wall,” he said.

He’s hit one figuratively in his IndyCar learning curve, where fast cars and encouraging results have been scarce. A rookie at 45, Johnson hasn’t finished better than 19th in his seven IndyCar races.

“I thought that so much of this would be closer than it has been, and I’ve been more surprised than anyone,” Johnson said. “I’ve always been very fair and realistic and honest with myself about challenges I would take on, but learning a new track and learning this car all at the same time is a lot to handle.”

Whenever retirement comes, Johnson has no plans to shift into team ownership like his NASCAR contemporaries Jeff Gordon, Tony Stewart, Denny Hamlin or Brad Keselowski. Gordon was recently named successor to Rick Hendrick at Hendrick Motorsports, where Johnson won his seven NASCAR titles, and said he would love to have Johnson on board when the time was right.

“Kyle, he’s just ripping it up right now. Jimmie was a lot like that,” Hendrick said.

Johnson said he had “no great desire” to become an owner, but the pull from Hendrick could one day bring him back to his NASCAR home.

“I would certainly have to entertain it, and if it had anything to do with Hendrick Motorsports and working with Jeff, Rick Hendrick, it would be a high priority for me to sort out,” he said. “Rick has changed my life. Rick is like a second father to me. Jeff gave me my start. Jeff even helped me meet my wife and I’ve been able to start my family as a result.”

It’s thinking of the concerns his family have for his safety that have kept the Indy 500 a goal for Johnson instead of a race firmed up on his schedule.

Johnson won four times at the Brickyard in NASCAR.

He finally seems ready to try and kiss the bricks one more time at one of the biggest sporting events in the world.