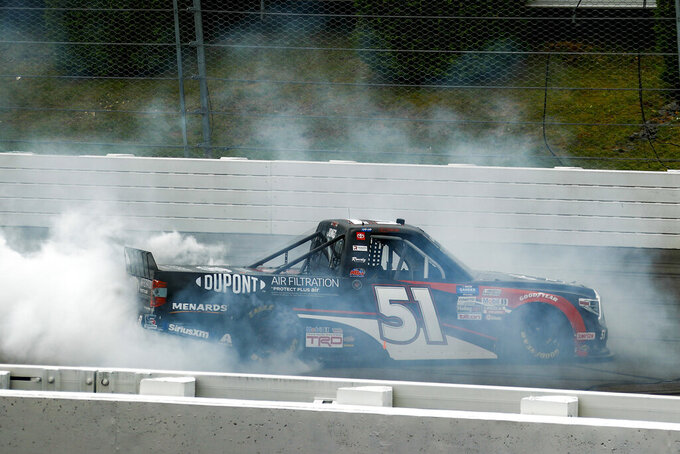 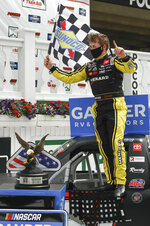 LONG POND, Pa. (AP) — Brandon Jones took home a trophy and sent a car to the scrap heap in about an hour at Pocono.

Jones won a two-lap sprint to the finish to win the wreck-filled Truck Series race, the first of three NASCAR races Sunday at Pocono Raceway.

The Truck race was rained out Saturday forcing the move to early Sunday. The second-tier Xfinity Series and Cup races will follow. Kevin Harvick goes for Cup victories on consecutive days at Pocono.

Jones' enjoyment was short-lived — he wrecked on the first lap of the Xfinity Series race.

“It doesn't take much when you get three wide,” Jones said. “We won the Truck race and I had high hopes for this race, too.”

The Truck race never got any momentum and dragged from start to finish because of nine caution flags and two red flags on a sloppy day of racing at Pocono. Clint Bowyer warmed up for his Cup race with a jog on track property as the Truck race started and tweeted in the waning laps, “There’s a good chance I still might outrun this truck race.”

Bowyer might have had the longest run of the day.

Christian Eckes blew a right rear tire that spun him out of the lead with 12 laps left, ending his race. The green flag came out with eight laps remaining only for the race to slow again three laps later when the whopping ninth caution of the 60-lap race bunched the field.

That left two laps for the traditional green-white-checkered finish and Jones made it a doozy when he sped away from Sheldon Creed to win his first Truck race in 46 career starts and in his first start since last season. He had 13 top-five finishes in the Truck Series — just never the checkered.

“We finally did it,” Jones said. “We’ve been close in the past.”

Jones drives the No. 51 Toyota for Kyle Busch Motorsports, the dominant team in the series, and he got some advice on how to handle the tri-oval track from his championship owner after Saturday’s Cup race.

“It’s not really that much pressure, honestly,” Jones said. "I think there’s so much that (Busch) provides for us. We were all on a call with him last night after the Cup race and he gave us so much information that led to this win today. It’s a group effort and I can’t do it by myself. I have to have all that stuff to tie the pieces in.”

Austin Hill was second and Creed, who won the first two stages, was third.

The race had a pair of big wrecks inside of 10 laps that gave the drivers a wake-up call from the early-morning start. Matt Crafton, a three-time series champion, and Codie Rohrbaugh smacked the wall on the first turn of the first lap. Austin Wayne Self and Raphael Lessard also hit the wall and that brought out the red flag for extensive cleanup.

The caution flag was out shortly again when Ty Majeski crashed hard entering the first turn to bring out the third caution flag at only 12 laps. The energy-absorbing SAFER barriers were put to good use throughout the race.