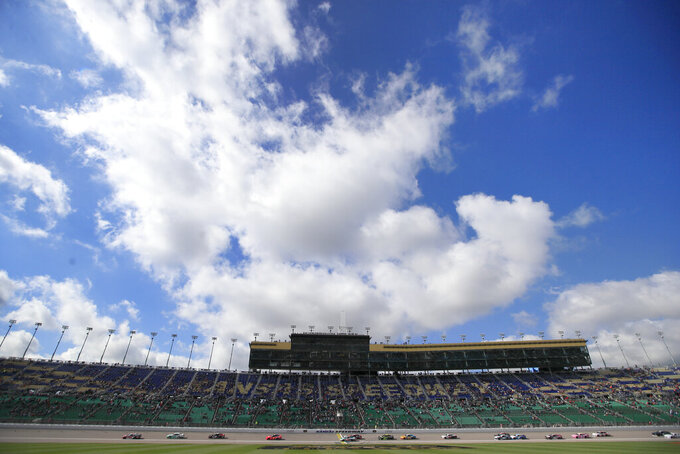 KANSAS CITY, Kan. (AP) — Brandon Jones raced to his first career Xfinity Series victory Saturday at Kansas Speedway after a lapped car wrecked what was shaping up as an entertaining duel between playoff contenders Chase Briscoe and Christopher Bell.

It wasn't the end of the drama, either.

Fellow playoff contenders Cole Custer and Tyler Reddick got into a pit-road melee after getting out of their cars. Custer was upset at the way Reddick raced him in the closing laps of the first race in the round of eight in NASCAR's version of the playoffs.

Reddick finished second and Briscoe rallied to third, while playoff drivers Michael Annett and Justin Allgaier rounded out the top five. Custer was 11th with Bell right behind him.

"I was just frustrated he can't keep the car on the bottom, then runs us up into the wall," said Custer, who was chasing his eighth win this season and remains second in the standings.

"It's fine if he wants to wreck their cars and put their car in the wall from time to time, but when it's me, I'm not going to be very happy," Custer said. "I went over to say that."

Custer put his hand on Reddick's shoulder, and the two immediately grabbed at each other's throats as they tumbled to the pavement. Crew members from both their teams jumped in with NASCAR officials in trying to pull them apart, and Custer dropped an expletive that was caught on live TV.

"I understand Cole's frustration 100 percent. We were trying to lock ourselves into Homestead" for the championship race," said Reddick, who was left with a small cut over his eye. "If you put your hand on me, I'm going to put you on your back. That's the way it's going to be."

Reddick remained third behind Bell and Custer in the playoff standings.

"I think a lot of Cole and his driving ability. I think a lot of that team," he said. "I obviously didn't want to get into his quarter panel but I lift, I get passed. I hate that it happened to him."

Briscoe and Bell had even more misfortune.

The duo battled for the lead throughout the closing laps, and they were running side-by-side — Briscoe riding the wall and Bell hugging the stripe at the bottom of the track — when the slower car of Garrett Smithley moved up the track and right into their path.

Briscoe checked up, Bell got into him and both of them came away with heavy damage. Briscoe had his entire rear end sheared off and was forced to the pits to have another riveted in place, while Bell used a series of pit stops to allow his team members to reconstruct his right front fender.

Custer had the lead on the restart until Reddick tagged him in the left rear, dropping him off the pace. And when another caution came out for Joey Gase, it was Brandon Jones suddenly in front.

He nursed the lead as a quartet of playoff contenders battled for position behind him. Allgaier moved past Reddick with five to go, and Briscoe got a big run to get around him one lap later, then set his sights on trying to chase down Jones in the closing laps.

Reddick eventually made a move for second place and that's how they finished.

"This is incredible," said Jones, a teammate of Bell with Joe Gibbs Racing who was knocked out of the playoffs in the last round. "I knew this was going to happen, that we were going to come here and have an amazing day. It's been so tough to get to this point."

Playoff contender Noah Gragson finished 13th after repeatedly tagging the wall with his right side, at one point cutting down his tire and forcing an off-schedule pit stop. Austin Cindric was 25th after an eventful day that put his hopes of advancing to Homestead in jeopardy.

Cindric got into the back of Harrison Burton during the second stage while aggressively trying to make a pass, damaging his front end. Cindric then flatted later in the stage, putting him several laps down, and the Team Penske driver wound up six laps behind the leaders.