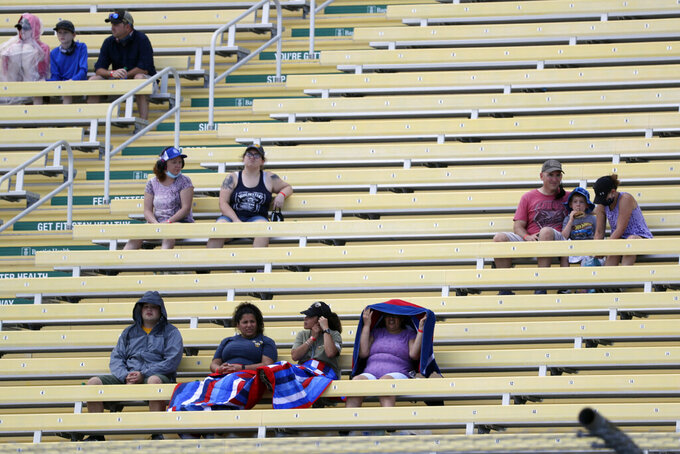 Fans wait for the start of a NASCAR Cup Series auto race Sunday, June 14, 2020, in Homestead, Fla. Up to 1,000 area military members and guests were allowed in to watch the race. (AP Photo/Wilfredo Lee)

HOMESTEAD, Fla. (AP) — Bubba Wallace wore a mask in the colors of the American flag, his hand over his heart as he stood for the national anthem.

This time, fans joined him.

In troubled and unprecedented times, a bit of normalcy returned to sports Sunday. Fans — only 1,000 of them, mostly military members and their guests — were at Homestead-Miami Speedway on Sunday, marking the first time people were on that side of the fence at a NASCAR race since the coronavirus pandemic shut down sports worldwide.

Among those fans: New Orleans Saints running back Alvin Kamara, who was wearing a T-shirt and cap with Wallace’s name on them. Wallace is the only full-time black driver in the Cup Series, and he has essentially become the face of the movement that led to NASCAR's decision last week to ban the Confederate flag from tracks.

“He’s got the weight of the world on his shoulders, being the only African-American driver and with what’s going on with the climate of the world right now and taking a stand,” Kamara said. “He’s backed into a corner right now, and it takes a lot of courage to be in the place that he’s in and still say, ‘You know what, I’m going to stand up for what’s right’ instead of just being quiet.”

There wasn’t a Confederate flag in sight. The U.S. colors flew in the center of the backstretch, swaying gently in the breeze.

Football legend Tony Boselli, a COVID-19 survivor, offered the invocation, fitting at a race rescheduled by the pandemic. Jon Secada, one of South Florida’s music superstars, performed “The Star-Spangled Banner” — like Boselli, doing so remotely.

With that, four jets from nearby Homestead Air Force Base roared in the sky over the track. The applause that followed was just a smattering, a sliver of the normal noise levels inside the enormous outdoor stadium that has hosted racing for more than 20 years.

Still, cheers were back. Quieter cheers, but cheers nonetheless.

“I don’t know a thing about NASCAR,” said Jennifer McClellan, one of the fans in attendance. “But I know days like today are going to be talked about for a long time.”

Not only did he laud Wallace’s courage for speaking out, he also had high praise for the white drivers standing with Wallace.

“I’m just going to be honest and say it gives some of these white drivers, who are predominant in the sport, a platform for them to be like, ‘You know what? I know it’s been wrong this whole time. Let me say the right thing now,’” Kamara said. “Maybe before they weren’t comfortable to say it.”

The flag issue was key for Kamara — who, when he was in college, lived in a dorm where the Confederate flag was displayed two doors away.

“For NASCAR to come together and be comfortable with where they are as a brand, as an organization to be like, ‘You know, it’s been wrong this whole time’ ... you can’t really be mad at them for that,” Kamara said.