Kanaan expects most competitive Indy 500 in his 18 years 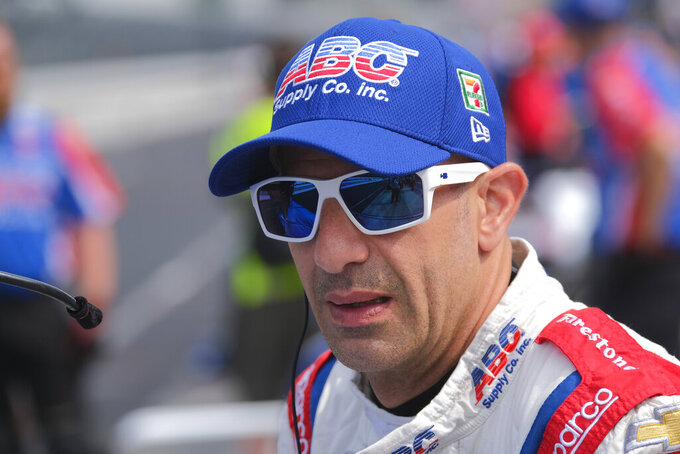 Tony Kanaan, of Brazil, waits for the start of the final practice session for the Indianapolis 500 IndyCar auto race at Indianapolis Motor Speedway, Friday, May 24, 2019, in Indianapolis. (AP Photo/AJ Mast)

INDIANAPOLIS (AP) — Tony Kanaan anticipates the most competitive Indianapolis 500 in his 18 years in the race.

In other words, Kanaan will need all the speed he finally found Friday.

Kanaan turned a quick lap of 225.517 mph to top the charts in final practice for Sunday's running of "The Greatest Spectacle in Racing." And it came after Kanaan was vocal in his displeasure of his No. 14 car for A.J. Foyt Enterprises after the penultimate practice session this past Monday.

"I'm happier because I found a couple things, not because we were at the top," said the popular Kanaan, who won the race in 2013. "I was not happy Monday. I was extremely angry about it. But starting 16th, I don't think you're going to see cars passing cars right away. The field is so tight."

In fact, the top six cars after Kanaan were carrying Honda power.

"It's the most competitive field I've ever seen," Kanaan said. "Qualifying was extremely hard and it's really tight. I think it's going to be a difficult race. I do strongly believe everybody who is starting this race can win this race."

The annual Carb Day revelry ahead of the 103rd running of the Indianapolis 500 got off to a soggy start as a line of storms rolled over Indianapolis Motor Speedway, which closed its gates briefly as lightning lit up the sky.

The storms moved away quickly, leaving in their wake a hot, humid day for thousands of fans taking in the festivities. The rain delayed the start of practice for about 15 minutes, but it still went off without any serious problems. It was followed by the Freedom 100 race for Indy Lights, the fan-friendly pit stop competition and an infield concert headlined by Foreigner.

It's been a rainy month of May at Indianapolis, and there is more rain in the forecast for this weekend. Some meteorologists have predicted a 90 percent chance of rain on race day.

Indy Lights newcomer Oliver Askew passed teammate Ryan Norman at the line to win the Freedom 100 by a mere 0.0067 seconds in the fourth-closest finish in race history.

Askew took the lead entering the final lap, and it appeared Norman would be able to use the draft to pass again for the win. He swung past on the outside along the backstretch and led through the first two turns, but Askew roared down the front stretch and nipped Norman at the line.

"I've never raced in front of so many people in my life," Askew said. "This is so unbelievable. I woke up this morning and felt like this could be the day."

"The timing just wasn't on my side," he said.

The race began with a harrowing crash involving Chris Windom and David Malukas, leaving each of their cars shredded on the front stretch. Windom's car briefly surfed along the catch fence, and the race had to be red-flagged while track officials repaired it.

It's the first time in 15 years that anybody but Ganassi or Team Penske won the event.

Ericsson dumped both powerhouse teams from the competition, beating Penske drivers Josef Newgarden in the quarterfinals and Will Power in the final. He beat Dixon in the first race of the finals, lost the second but had the preferred lane choice for the decider by having the best single run.

"It's great for the guys. They work all winter long and it's all about them," said team owner Sam Schmidt, whose crews lost in the finals each of the past three years. "Fantastic event."