Keselowski looks to defend Talladega win, save his season 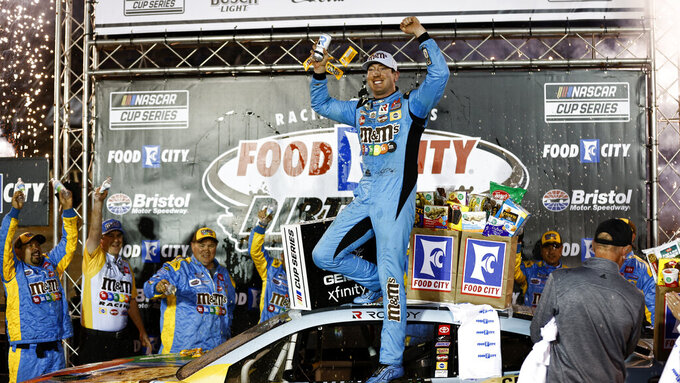 TALLADEGA, Ala. (AP) — The winningest active driver at Talladega Superspeedway just might be able to save his season on Sunday by defending last year's victory.

Brad Keselowski isn't banking on a seventh Talladega win, though. But if it's in reach, well, Keselowski won't hold back in search of his first victory since leaving Team Penske for an ownership stake at RFK Racing.

“We've got a great shot," Keselowski said. "If we're anywhere close, I'm going to leave it all out on the line.”

A penalty for illegal modifications made to the No. 6 Ford has devastated Keselowski's first season as a driver-owner and knocked him to bottom of the Cup standings, lower than any other full-time driver. It took him a month to climb from 35th in points to 30th — a mark he hit last week at Bristol that makes him eligible for the playoffs should he win a race.

His best chances at victory are likely at Daytona or Talladega.

Keselowski and teammate Chris Buescher each won a qualifying race at Daytona International Speedway in February, but the RFK organization has not won a Cup points race since 2017. The team won twice that year — both races on a superspeedway, with Ricky Stenhouse Jr. sweeping the two stops at the Alabama track when the team was known as Roush Fenway Racing.

The organization has not won on any type of track besides a superspeedway since a 2014 win by Carl Edwards at Sonoma.

So the speedway races seem to be Keselowski's best shot to extend his streak of playoff appearances to nine consecutive years.

“I think there’s probably a little bit of truth to that, but honestly I’m looking at the next month and I’m really excited about the races we have,” Keselowski said. “I think we can win any one of them. We’ve got a lot of good stuff coming down the pipeline. We’re starting to figure some things out and find some of the missing puzzle pieces, so I’m not ready to say that we have to win on a (superspeedway) to advance to the playoffs.

“I feel like we’re starting to find our game at other tracks, too. We have lot more confidence in the cars, and the team is learning a lot."

Keselowski will start 15th on Sunday as the Ford camp struggled in qualifying. Joey Logano, his former Penske teammate, was the highest-qualifying Ford driver at 13th.

But the Ford camp was most organized the entire week of Daytona, where teams and drivers must work together to navigate through the pack and get to the front of the field. It led to a win for Penske rookie Austin Cindric and seven Fords in the top 10.

Chevrolet driver William Byron won in March at Atlanta, where the reconfigured track raced like a superspeedway, and isn't sure if the rival manufacturers have as solid a plan as the Ford group. He name-checked Tyler Reddick, Ross Chastain, Chase Elliott and Erik Jones as aggressive Chevy drivers who can help the brand beat Ford on Sunday.

“There’s some really aggressive Chevy drivers. I think there’s some really good drafters that we can work with," Byron said. "I felt like at Atlanta we were better. We were improved. That’s probably the closest thing to this weekend. I know (Ford) can tandem really well, even at Atlanta for a lap or so they could stay connected, and that’s something that we have to work on. But I think we’ve got the aggressive guys to push each other as much as we need to.”

Christopher Bell and Martin Truex Jr. led a Toyota lockout of the front row for Joe Gibbs Racing in qualifying, but the Sunday plan will have to be perfect to get the Japanese automaker into victory lane. Of the 39 cars in the field, only six are Toyotas; Chevrolet, meanwhile, has 17 entries and Ford has 16.

“We'll try to work together as good as you can and what happens, happens,” Kyle Busch said. “There's really no overcoming strength in numbers.”

Keselowski was aggressive in his ninth-place finish in the Daytona 500 and his pushing caused two different crashes. He said he's not proud but “honestly, it was time to go and my car could have took the same push that I gave those cars.”

But when he arrived at RFK, he warned his new team that "I’m probably going to wreck out of a number of races this year.

“It’s going to be for good reason. Every time, I’m going to push the car as hard as I can push it and probably overstep it. Something is going to happen and then we’re going to come back and we’re going to make it better,” he said. "As long as those failures are coming from a push and not a silly mistake, I’m OK with that, whether it’s me or anyone else in the company. We’ve got to push really hard if we’re going to get where we want to get. We’ve got room to go.”

Ryan Blaney is the 10-1 favorite to win Sunday, per FanDuel Sportsbook. Blaney is a two-time winner at Talladega and was racing Austin Cindric for the win in the Daytona 500 when Cindric threw a block that put Blaney into the wall. ... There are 10 previous Talladega winners in the field, and Logano at three victories trails Keselowski among active drivers. ... The late Dale Earnhardt holds the record with 10 victories. ... Talladega Superspeedway holds the all-time record in green flag passes for the lead in a single Cup Series race with 219 lead changes in 2013.