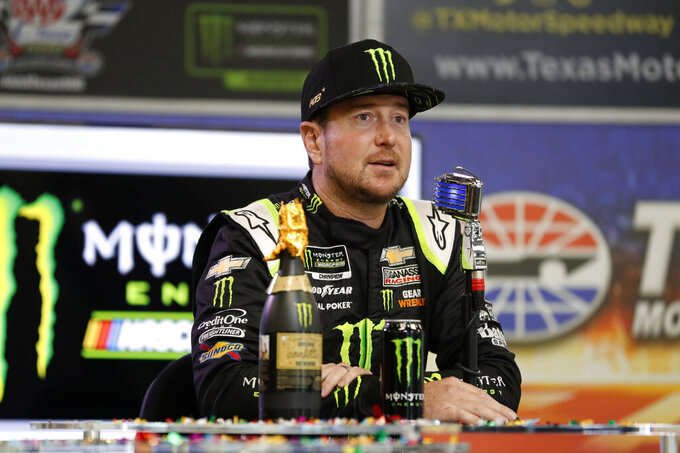 FORT WORTH, Texas (AP) — Kurt Busch will go into his 21st NASCAR Cup season next year without having to answer questions about whether he will be back for more after that.

Busch and sponsor Monster Energy have agreed to multiyear extensions to stay with Chip Ganassi Racing.

"It's very comforting to know that I won't have to answer the questions weekly about being a 41-year-old veteran in a sport where there's a young push," Busch said Saturday. "That will be refreshing, because the focus should be on track."

The deal was announced at Texas Motor Speedway, after track president Eddie Gossage presented Busch a rocking chair that generally indicates retirement. That was part of a big setup before the 2004 Cup champion and team owner Chip Ganassi revealed the extension to keep driving the No. 1 Chevrolet.

"There's no time for a rocking chair. This old guy has got some more kick left in him," Busch said.

"As I said once or twice before, it's not often you get a chance to bring a guy into a team that's a champion," Ganassi said. "He sparked that 1 car."

Ganassi said Busch delivered several members of the No. 1 team their first Cup victory, and has had a positive impact on 27-year-old teammate Kyle Larson, whose No. 42 car is still in the playoff chase.

Busch made the first round of the playoff this season, but didn't advance when the initial 16 drivers was cut to 12 after three playoff races.

When Busch and his sponsor moved to Ganassi on a one-year deal last winter to replace Jamie McMurray, after five seasons with Stewart-Haas Racing, many believed the 20th season could be Busch's last of fulltime NASCAR competition.

Busch won for Ganassi at Kentucky in July, and has 17 top-10 finishes this season. That was his 31st career win, and the sixth year in a row that he got to victory lane.

"It means the world to me to have this come together and have a championship quality ride to race at this point in my life and my career," Busch said. "There's still more special moments ahead, there's still more to accomplish. There's plenty of gas in this tank."