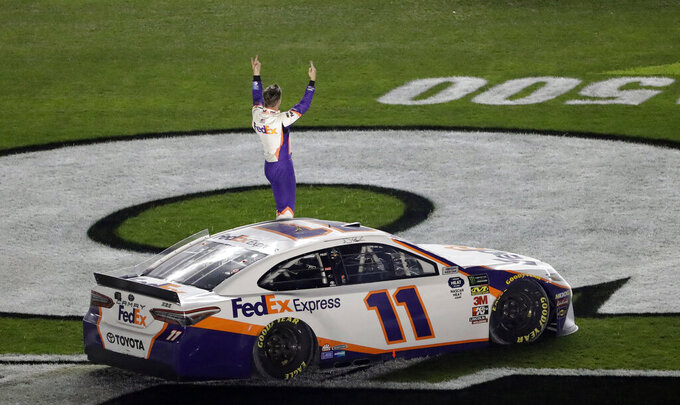 DAYTONA BEACH, Fla. (AP) — Kyle Busch felt like an amiable teammate, willing to do whatever it took to get Joe Gibbs Racing to victory lane at the Daytona 500. He's not so sure Denny Hamlin did the same.

Busch finished second in "The Great American Race," extending his winless streak to 14 in NASCAR's season opener, and sounded less than thrilled with the way Hamlin handled the final laps at Daytona International Speedway.

Busch said Hamlin declined to work together on the next-to-last restart Sunday. But on the final restart, Hamlin wanted — and welcomed — Busch's help. Busch did some blocking that allowed Hamlin to pull away and hold off Joey Logano's late challenge.

Hamlin went on to win the Daytona 500 for the second time in four years. Busch settled for a runner-up spot and left Daytona International Speedway second-guessing everything that unfolded down the stretch.

"This was probably the best shot to win," said Busch, who led four times for 37 laps. "Being up front that much at the end of the race and having the track position and being in those positions on those restarts."

Busch was leading on a restart with nine laps to go and opted to start from the bottom lane after Hamlin told Busch's crew that they would "race it out" without working together.

Before the final restart, though, Busch said Hamlin wanted to "go back into teammate preservation mode."

"Kind of funny how it swaps back and forth a little bit, but it is what it is," Busch said.

Joe Gibbs Racing and Fox Sports paid tribute to Gibbs early in the race. The team and the television network recognized Gibbs during the 11th lap of the race. Gibbs' favorite number was 11, the car number Hamlin has driven for JGR since 2005.

J.D. Gibbs helped his famous father start the race team, ran it while Joe Gibbs was coaching the Washington Redskins, was a tire changer on the team's first Daytona 500 victory and the one who discovered Hamlin during a test session at Hickory Motor Speedway in North Carolina.

JGR notched the first 1-2-3 sweep in the Daytona 500 since Hendrick Motorsports accomplished the feat in 1997. So the team leaves Daytona with plenty to celebrate. Busch might need a day or two to revel in the success.

"I'd much rather see a JGR car in victory lane more than anybody else, so I felt like keeping our strength in numbers lined up was going to be the best we could be."