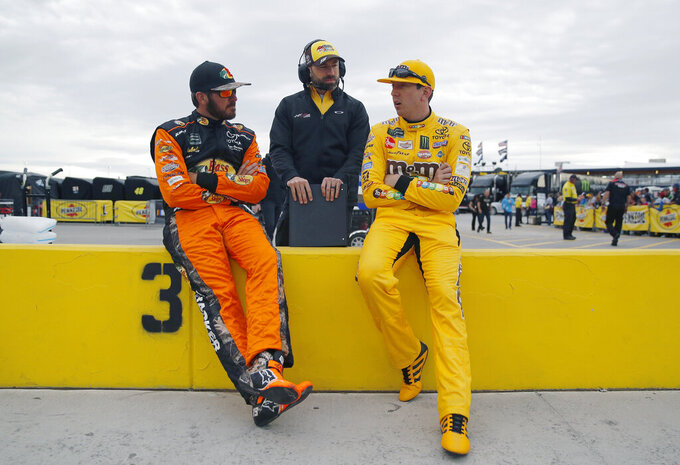 LAS VEGAS (AP) — Kyle Busch moved into position for a three-race weekend sweep in his hometown, holding on in double overtime to win the NASCAR Xfinity Series race on Saturday.

"I thought this would be the toughest of the three," Busch said. "We had a fast race car, but we could never get the balance, even in the race right there."

Busch still pulled off yet another victory in the second-tier series, and he'll have the chance for a third straight win Sunday. Busch is the only driver ever to win Trucks, Xfinity and Cup series races in the same weekend, doing it at Bristol in 2010 and 2017.

Busch had to bounce back from falling to 33rd place during an early unscheduled pit stop due to a loose wheel, but the veteran Cup Series driver rolled back into the lead and still led 98 laps.

"I thought, 'OK, there's an opportunity here, but there's a lot of things that have to go our way,'" Busch said. "Fortunately, that caution in the beginning of the second stage went our way and allowed us to put our first set of tires on with a fresh wheel. ... This Supra was fast out there today, and awfully fun to drive. We worked for that one, that's for sure."

He stayed in front during two overtime restarts, the second caused when Brandon Jones took heavy damage in a collision with Cole Custer.

"I knew to keep fighting and keep working," Busch said. "It was early enough where you could try to come back from one of those kinds of setbacks. I wasn't sure how we were going to do it, being short a set of tires. We got a lucky break with that caution in the second stage that got us back on cycle."

Busch has won just once in 15 career Cup races on his hometown track, but he'll start third on Sunday. Busch isn't a big fan of NASCAR's new rules package, which keeps speeds down and downforce up in an attempt to encourage tough, tight racing.