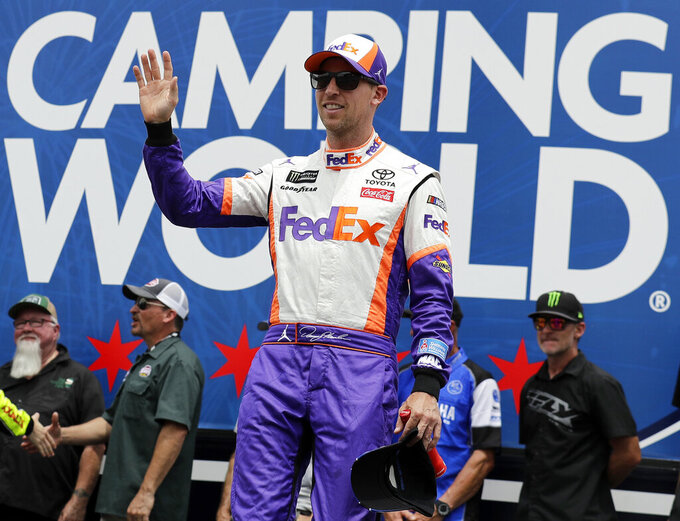 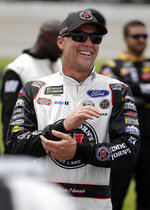 Bowman had one of the fastest cars during practice, and the strength of his No. 88 Axalta Chevrolet showed after the race was delayed by a summer storm. The 26-year-old Bowman had just six top-five finishes in 133 starts on NASCAR's top series before his banner day on the bumpy 1.5 mile oval.

Kyle Larson put together another memorable run a year after he lost an epic last-lap duel with Kyle Busch on the same track. Larson passed Bowman with about seven laps left, but Bowman quickly regained the lead and smartly navigated his way to the finish.

It was Hendrick's second victory of the season. It placed four drivers in the top 11.

Harvick is looking for his first win this season after he had eight victories last year.

The race calmed down a bit in the middle after Stage 1 was marked by tire trouble for some top teams. Thunderstorms caused a delay of more than three hours, changing the conditions after it was hot and muggy for the start of the race.

Hamlin was in the lead when Clint Bowyer had some tire trouble, bringing out a caution flag.

The race was delayed for more than three hours by thunderstorms, changing the track conditions after it was hot and humid at the beginning of the day. Kevin Harvick and Ryan Blaney ran in front for a while, but had some tire trouble near the end of the stage.

The NASCAR Cup Series race at Chicagoland Speedway has resumed after being delayed for more than three hours by thunderstorms.

The drivers completed 11 laps before the race was stopped because of lightning in the area. Jimmie Johnson was in the lead, followed by Kevin Harvick and Ryan Blaney.

It was 93 degrees when the race started. It was about 72 when it resumed.

The NASCAR Cup Series race at Chicagoland Speedway is being delayed by lightning.

It's a hot and humid day and a line of thunderstorms is moving into the area. Track officials are encouraging fans to evacuate the seating area and take shelter.

The drivers completed 11 laps before NASCAR halted the race. Jimmie Johnson was in the lead, followed by Kevin Harvick and Ryan Blaney.

The NASCAR Cup Series race at Chicagoland Speedway is underway.

Austin Dillon led the field to the starting line. He started from the pole for the third time this season.

The race is scheduled for 267 laps and 400.5 miles, but it's a hot and humid day and a line of thunderstorms appeared to be moving into the area.

Weather is a concern for the NASCAR Cup Series race at Chicagoland Speedway.

There are scattered thunderstorms in the forecast Sunday afternoon at the suburban racetrack.

Austin Dillon starts from the pole for the third time this season and sixth of his career. The Richard Childress Racing driver is seeking his first win since last year's Daytona 500.

Kevin Harvick, a two-time winner on the bumpy 1.5-mile oval, also is on the front row. Daniel Hemric, one of Dillon's teammates at RCR, qualified third, followed by Jimmie Johnson and Kurt Busch.

Last year's Cup race at Chicagoland was one of the series' best finishes of the season, with Kyle Busch winning a late duel with Kyle Larson.