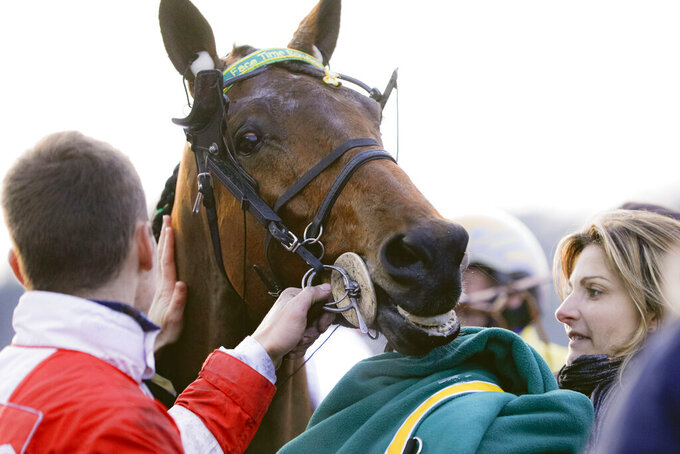 The Latest on the effects of the new coronavirus outbreak on sports around the world:

Michigan coach Jim Harbaugh and his wife, Sarah, are donating $100,000 to United Way for Southeastern Michigan to support its COVID-19 community response fund.

“We stand with families feeling the brunt of this crisis and encourage others to give or volunteer, if they are able,” Jim Harbaugh said.

“There are still so many families that need help, and that number is increasing every day,” Hudson said.

The New York Giants are deferring the next payment for their season ticket holders until July 1.

Co-owners John Mara and Steve Tisch emailed the change to the ticket holders on Monday.

It marks the second time this year the Giants have pushed back the due date on ticket payments since the coronavirus pandemic caused many people to experience economic hardships. In mid-March, they deferred payments due that month and in April until May 13.

The Giants have several options for paying for season tickets, including a four-month plan, a six-month plan and one-payment deal.

SailGP has called off the rest of its second season due to the coronavirus pandemic and will reschedule the regattas for 2021. The global league also voided the results of the only regatta that was sailed this year, a decisive victory by Britain’s Sir Ben Ainslie in Sydney in late February.

SailGP also said co-founder Russell Coutts, a five-time America’s Cup winner, has temporarily forfeited his salary and remaining employees have voluntarily taken salary reductions through the end of the year. Contracted sailors will be compensated for more than 50 percent of the planned season.

Two of the four canceled regattas have new dates for 2021: San Francisco on April 17-18 and New York on June 4-5. SailGP intends to return to England and Denmark during the rescheduled Season 2, replacing regattas previously planned for this August and September. The league wants to expand from five to at least seven regattas.

The track near the New Jersey shore announced a trimmed-down stakes schedule Monday. The meet will run 37 days and feature 35 stakes worth more than $5 million. The highlight is the $1 million TVG.com Haskell on July 18.

The track originally planned to open last weekend but that was postponed because of the caronavirus pandemic.

Historically run as an invitational, the 1 1/8-mile race will be contested as a stakes race this year, with nominations closing June 26. The $300,000 United Nations will be contested on the same card as the Haskell.

“We continue to develop plans to ensure the safety of our staff, the horsemen and fans,” said Dennis Drazin, chief executive of Darby Development LLC, operators of the track. “These plans are fluid and will continuously be monitored and updated as necessary.”

Drazin said the track will address racing with or without fans.

“In the end, all plans are subject to the governor’s approval and we’ll continue to take our cues from his office,” Drazin said of Gov. Phil Murphy.

Live racing will take place on Fridays, Saturdays and Sundays from July 3 through Sept. 27. The stable area at the track is set to open on June 1.

The Big Ten Conference has announced the formation of its Mental Health and Wellness Cabinet and that all athletes, coaches and full-time staff members of athletic departments and the conference office will receive free access to a popular mental fitness app.

The cabinet will promote optimal mental health for athletes. It is made up of 31 individuals representing the 14 conference schools and affiliate members Johns Hopkins (women’s and men’s lacrosse) and Notre Dame (men’s hockey).

“The cabinet will be instrumental for us both short and long term, as we pursue our goal of creating and maintaining the most comprehensive mental health and wellness platform in college athletics,” commissioner Kevin Warren said.

Albania’s soccer federation has asked the government to allow the resumption of league matches held without fans and following a strict medical protocol.

The matches have been suspended since mid-March following the coronavirus outbreak and the country’s total lockdown.

The federation has presented a sanitary protocol drafted in consultation with UEFA and FIFA and resembling the model to be followed by Germany.

The federation wants the government to first let the clubs resume training, strictly respecting the hygienic measures to contain the virus, and then hold the remaining 10 league matches starting from May 20.

There has been no government response so far.

The Spanish soccer federation says the Copa del Rey final will only take place when fans are allowed back into stadiums in Spain.

The federation says the final between Basque Country rivals Athletic Bilbao and Real Sociedad will be delayed until fans are allowed to attend it, even if that means playing the match next year.

Both clubs had petitioned to play the final only when fans were allowed back.

The federation says the only condition is that it takes place before the 2020-21 final.

This year’s final was originally scheduled to be played on April 18 in Seville.

French horseracing organizer France Galop says Paris police have given the green light for racing to resume next Monday, when France starts to ease its coronavirus lockdown in place since March 17.

He says: “It’s very good news and a real victory!”

The first races will be held at the ParisLongchamp race track without spectators.

The organizer has previously said that access to racecourses will be tightly controlled as racing resumes.

It says horses trained abroad and foreign jockeys will not be allowed to participate in French races until the end of May at the earliest.

World TeamTennis is in discussions with several cities in an attempt to find one to host the league’s full nine-team schedule in one venue without spectators amid the coronavirus pandemic.

WTT still hopes to start play on July 12, as scheduled.

But that could change, as could the length of the season. It normally lasts three weeks, with play at the various teams’ home sites.

All sanctioned professional tennis tours are suspended at least until mid-July because of the COVID-19 outbreak.

Some exhibitions have started popping up, with no fans in attendance.

The German soccer league says there were 10 positive tests for the new coronavirus among 36 clubs in the Bundesliga and second division.

The DFL says that 1,724 tests for COVID-19 were carried out over two rounds among players and staff.

The tests were part of the DFL’s hygiene concept as it bids to restart the leagues some time in May. It says teams will also undertake a “a mandatory training camp under quarantine conditions before a possible continuation.”

Testing will continue regardless of whether competitive games restart or not.

Chancellor Angela Merkel and 16 state governors have postponed a decision until Wednesday on whether the Bundesliga could resume without fans present.

German clubs had committed to finishing the season by the end of June.

The Big Ten Conference has announced it will extend the suspension of organized team activities through June 1 and re-evaluate then.

The conference previously announced a moratorium on all on- and off-campus recruiting activities. No date for that to end has been set.

The Big Ten says it is continuing to consult with medical experts and school leaders to determine appropriate steps for dealing with the coronavirus pandemic.

University of Iowa President Bruce Harreld said during a regents meeting last week it was hoped preparations for the 2020 football season could begin June 1.

New Orleans Saints quarterback Drew Brees, Hockey Hall of Famer Wayne Gretzky and U.S. women’s soccer star Carli Lloyd are among the athletes who are participating in a project which will recognize and celebrate health care workers for their efforts during the coronavirus pandemic.

“The Real Heroes Project” was announced on Monday. It is a collaborative initiative among 15 leagues, including Major League Baseball, the National Football League, National Basketball Association, National Hockey League and Major League Soccer.

Participating athletes will share a personal thank you message on social media utilizing #TheRealHeroes from Monday. Athletes will cover their name on their jerseys or uniforms and replace it with the name of the health care worker they are honoring.

Public service announcements will debut on Wednesday across league and team platforms. The other leagues participating are the ATP, NASCAR, NWSL, USGA, WNBA, WTA as well as the WWE and esports Overwatch League, Call of Duty League and Electronic Arts.

Amiens is asking the French soccer league to review its decision to relegate the club from the country’s top flight following the early termination of the season because of the coronavirus pandemic.

The team from northern France has started a petition to “demand justice for this far-reaching decision which goes against fairness in sport.”

Amiens was in 19th place in the 20-team Ligue 1, above only Toulouse, when sport around the world was brought to a halt in March due to the pandemic. The French league season was canceled last week under orders from the government.

Amiens had 10 games left to play and was four points behind 18th-place Nimes. The bottom two teams are automatically relegated in France.

Amiens says the “fairest choice” would be to expand Ligue 1 and make it a 22-team division for the 2020-21 season.

The club is asking “supporters from Amiens and lovers of football” to support its initiative, which “would make football and sport grow.”

The search is on for a new host for the women’s European gymnastics championships.

European Gymnastics, the continental governing body, says that France isn’t able to host the championships if they’re rescheduled to the fall of 2020, so the “call for a new host is open.”

The championships were meant to take place in Paris from April 29 through May 3 as a tune-up ahead of the Olympics but were canceled due to the coronavirus pandemic. European Gymnastics is still hoping to stage them on a new date.

It’s looking for a new host for the European trampoline championships to replace Sweden. That event has been moved from this month to spring 2021.