The Latest: Jones holds off Kyle Busch to win Darlington 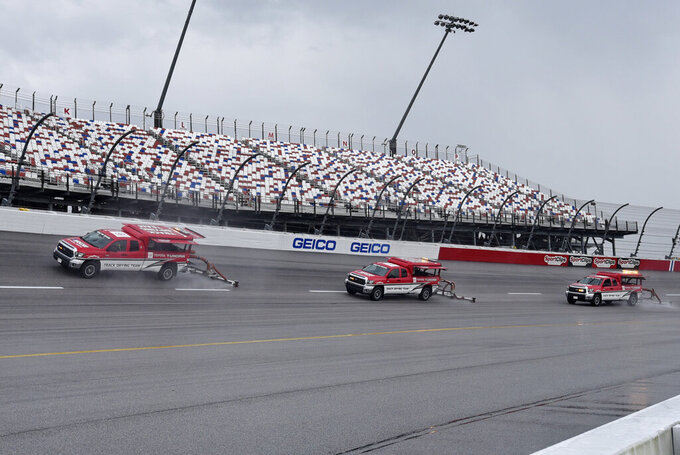 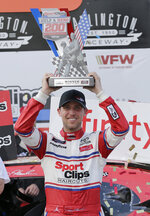 DARLINGTON, S.C. (AP) — The Latest on the Southern 500 at Darlington Raceway (all times local):

The 23-year-old Jones passed Kyle Larson for the lead at Darlington Raceway and held strong through a final series of green flag pit stops for his second career win — and his first since taking the summer event at Daytona in 2018.

Heavy rains delayed the start of the race more than four hours. Things finally ended at close to 2 a.m., some eight hours after the event's scheduled start.

Busch led the most laps at 118, despite starting from the back because of an engine switch. Busch looked like he'd end in second before hitting the wall on the next-to-last lap and dropping to third.

Jones' win was the 13th this season for JGR and meant all four of Joe Gibbs racers has at least one victory.

Daniel Hemric's flat tire led to major crash that caught up seven drivers at the Southern 500, including seven-time NASCAR champion Jimmie Johnson and Denny Hamlin, a four-time winner this season.

Kurt Busch, who won the opening stage at Darlington Raceway, was also part of the accident that came with less than 100 laps remaining at the rain-delayed race.

Johnson was looking to make up ground in his chase for NASCAR's playoffs and had run in the top 10 much of the race.

Hamlin had won last time out at Bristol and figured to be a contender here, as well.

The Busch brothers have dominated the rain-delayed Southern 500, with Kyle winning the second stage after his brother Kurt took the opening stage at Darlington Raceway.

Kyle Busch started 33rd after his team swapped out engines Saturday. He rallied through the field in the first stage, then passed Kurt Busch in the pits in the stage break to take the lead.

The start of the Southern 500 was delayed more than four hours because of heavy rains in the next-to-last event of the NASCAR Cup Series' regular season.

Kurt Busch has won the first stage of the Southern 500 on Sunday.

Jimmie Johnson finished second in the 100-lap stage at Darlington Raceway and Kyle Larson third. Kyle Busch, who began at the back of the field after changing an engine, rallied to fourth. Denny Hamlin was fifth with Chase Elliott in sixth.

The race was delayed more than four hours because of heavy rains at the track.

The Southern 500 is finally underway at Darlington Raceway.

The NASCAR Cup Series race was delayed more than four hours due to heavy rains that hit the track right before the scheduled 6 p.m. start.

Racers were called to their cars around 9:20 p.m. Once they rolled off pit road, drivers had several slow warm up laps as the driers that had been on the track worked to dry moisture in the pits.

The biggest worry, Kevin Harvick said, was that things were starting "way past my bedtime."

NASCAR said it took many factors into consideration when deciding to run, including a sold-out crowd at Darlington and the approach of Hurricane Dorian to South Carolina's coast.

South Carolina Gov. Henry McMaster ordered evacuations for coastal counties earlier Sunday and that lanes of area roadways would be reversed for those leaving the seacoast.

The rain has subsided and NASCAR is drying out Darlington Raceway to run the Southern 500 on Sunday night.

NASCAR announced it had every intention to get the event underway and completed, despite heavy steady rains that delayed the 6 p.m. start.

There is no tentative time when the race is expected to begin yet, NASCAR said.

Loud jet driers are circling the track for the third time Sunday. Rain about two hours before the scheduled start was cleared up and racers went through on-track introductions. But a short time before engines were to fire up, a heavier rain soaked the track for nearly two hours.

The Southern 500 is the next-to-last event in the Cup series regular season.

Heavy rain has delayed the start of the Southern 500 at Darlington Raceway.

NASCAR officials had no time for a restart.

Air drying machines had dried the surface after a rainstorm earlier in the afternoon. Drivers came out to their cars and it looked like the race would go under overcast skies. But a short time before the green flag was set to drop, strong storms sent crews covering up cars and racers carrying umbrellas as they went to wait out the weather.

If you don't have a seat yet for the Southern 500, you're too late.

Track officials announced they had sold out all of the 47,000 reserved seats for Sunday night's event at Darlington Raceway.

The track dubbed "Too Tough To Tame" had come close in recent years to filling up but had always come up shy of a sellout.

Darlington's last sellout was in 2008, the last of four straight years every ticket was sold when the race was run on Mother's Day weekend.

The race was a crown jewel of the Monster Energy NASCAR Cup Series when it was run on Labor Day weekend from its inception in 1950 until 2003. After 12 years of shifting on the NASCAR calendar from November to May to April, the Southern 500 moved back to Labor Day weekend, where it's become the sport's official throwback weekend.

No one's been as hot as Denny Hamlin in NASCAR. He believes he can keep that going Sunday night in the Southern 500 at Darlington Raceway.

Hamlin has won four races this season, including two of the past five events. He captured the last NASCAR Cup Series race at Bristol two weeks ago and will start ninth here.

Hamlin looked like he had gone from last to first to capture the Xfinity race at Darlington on Saturday until NASCAR disqualified him because his car did not meet ride-height guidelines.

Points leader Kyle Busch will start from the back of the field after changing an engine.