The Latest: Logano holds off Keselowski for Vegas NASCAR win 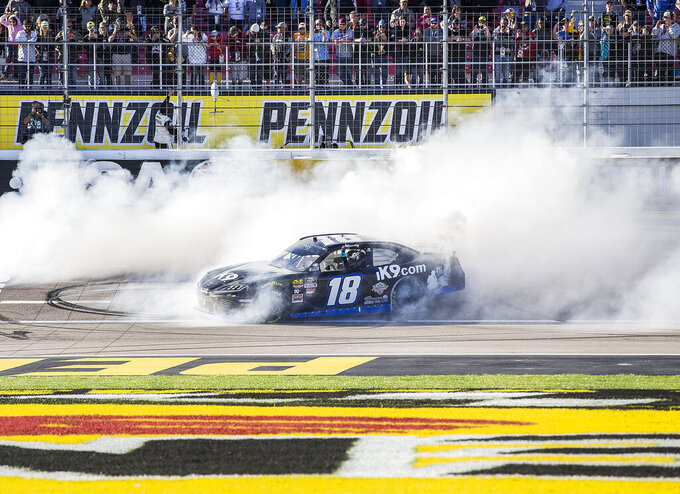 LAS VEGAS (AP) — The Latest on the NASCAR race in Las Vegas (all times local):

Logano drove his Team Penske Ford to his 22nd career victory and his first of the season, narrowly answering Keselowski's last-lap passing attempt down the stretch.

Logano had never won a Cup race in Vegas in 11 tries during his first 10 full-time seasons, although he won an Xfinity Series race here in 2017.

Kyle Busch finished third, unable to recover from a mid-race speeding penalty in the hometown driver's quest for the third three-race weekend sweep in NASCAR history.

Pole-sitter Kevin Harvick was fourth, and Kurt Busch finished fifth for the Las Vegas native's first top-five finish at his home track since 2005.

The first race under NASCAR's full new rules package produced a caution-free event with some exciting action up front, including a couple of wild restarts after the two segments.

Joey Logano surged into the lead during the second stage of the NASCAR Cup Series race in Las Vegas.

Logano moved barely in front of pole-sitter and Stage One leader Kevin Harvick heading into the finish after an entertaining second stage. The exciting racing up front was exactly what NASCAR hoped would happen in the first race under its complete new rules package, which is intended to keep cars closer together.

Martin Truex Jr., who won at Vegas in September, was third with Brad Keselowski in fourth.

Kyle Busch's quest for a three-race weekend sweep in his hometown took a blow when he was penalized for speeding on pit road in the middle of the second stage. Busch knew he had made a mistake, knocking him back to 17th.

Busch got back on the lead lap near the end of the second stage.

Kevin Harvick is leading from the pole after the first stage of the NASCAR Cup Series race in Las Vegas.

The defending race champion also swept both stages of this race last year, and he remained up front after leading 62 of the 80 laps in a fairly uneventful opening stage.

Kyle Busch moved up to second in his quest for a three-race weekend sweep in his hometown. Joey Logano was third, and Denny Hamlin was fourth.

Kyle Larson was hurt by a pit-road penalty for the second straight week. After a speeding penalty knocked him out of the lead in Atlanta, his crew had too many members over the wall in Vegas, sending him back to the middle of the field.

The third race of the NASCAR Cup Series season is underway in Las Vegas.

Kevin Harvick stayed in the lead off the pole, and hometown driver Kyle Busch moved up to second before falling back to fifth in the early going.

Drivers expect difficult racing under NASCAR's new rules package, which should keep them bunched up and unable to pull away.

Kyle Busch is going for a three-race weekend sweep when he takes to his hometown track in the NASCAR Cup Series race at Las Vegas Motor Speedway.

Busch won the Trucks race on Friday and the Xfinity Series race on Saturday, giving him 197 career victories in all three series. He has won only one Cup race in Vegas, but he is among the favorites in NASCAR's third race of the new season.

Defending race champion Kevin Harvick is on the pole when NASCAR debuts the entirety of its new rules package designed to foster tighter racing and more passing.

Drivers expect to be in big packs of racers with plenty of lead changes due to the reduced speeds and increased downforce.