The Latest: Pagenaud fights for job by winning Indy 500 pole 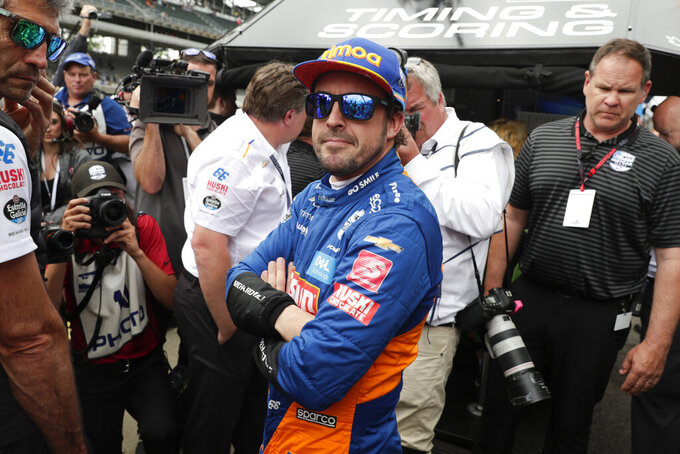 Fernando Alonso, of Spain, watches the final qualifier during qualifications for Indianapolis 500 IndyCar auto race at Indianapolis Motor Speedway, Sunday, May 19, 2019, in Indianapolis. Alonzo failed to make the field for the race. (AP Photo/Michael Conroy)

INDIANAPOLIS (AP) — The Latest on Indianapolis 500 qualifying (all times local):

Simon Pagenaud has won the pole for the Indianapolis 500, strengthening his case for keeping his job at Team Penske.

Pagenaud averaged 229.992 mph in four laps of Sunday qualifying to lock down the top spot for the May 26 race. Pagenaud has been in the rumor mill for some time because of a long losing streak that he finally snapped last week on the road course around Indianapolis Motor Speedway.

Now he's on the pole for the race boss Roger Penske rates most important. Penske has a record 17 wins in the Indianapolis 500 and this year is marking his 50th anniversary in the race.

Ed Carpenter and Spencer Pigot qualified second and third for a Chevrolet sweep of the front row.

Two-time world champion Fernando Alonso was knocked out of the Indianapolis 500 when he failed to qualify for next week's race on the second and final day of qualifying on the 2.5-mile oval.

The Spaniard left on a golf cart with his McLaren Racing team after Kyle Kaiser bumped Alonso from the 33rd and final starting spot with the final run in the six-car last row shootout. Kaiser's four-lap qualifying average of 227.372 mph was just a tick better than Alonso at 227.353.

Kaiser was running in a backup car after crashing in practice Friday.

Canadian driver James Hinchcliffe avoided missing the race for the second straight year. He was the first one out after a rain delay of more than four hours and averaged 227.543. He will start 32nd for Arrow Schmidt Peterson Motorsports.

American Sage Karam had the fastest run of the session, qualifying 31st with an average of 227.740. Both Dreyer & Reinbold Racing cars are now in the race.

McLaren used a lengthy rain delay at Indianapolis Motor Speedway to patch together a car it will desperately try to qualify for the race.

The car Fernando Alonso will make his final qualifying attempt in has gotten assistance from several teams in the garage, and the help includes dampers from Andretti Autosport. Many believe McLaren received advice from Team Penske — McLaren team director Gil de Ferran is an Indy 500 winner for Penske — and Chevrolet assisted with the setup.

The team was roughly 10 minutes late getting on track Sunday morning for a brief morning practice session before the "Last Row Shootout," and Alonso didn't get a full lap in before the left rear of his car was dragging and sparking on the track surface.

McLaren had thrown an entirely new setup onto the car and was frantically trying to figure out if it had any speed. Alonso got just five more laps in before the session was called for rain.

The rest of the afternoon was a frenetic hustle as the McLaren engineers worked on Alonso's car in his bid to claim one of the final three spots in the May 26 race.

It's another rough day for McLaren at the Indianapolis 500 as rain has slowed the team's preparation time for its last-gasp run at making the race.

McLaren completely overhauled its car Sunday morning and sent Fernando Alonso on track with a new setup. But the car was too low in the rear and dragged and sparked along Indianapolis Motor Speedway. Alonso returned to the pits for a fix, completed five more laps, and then rain stopped the session.

Alonso is one of six drivers scheduled to compete in the "Last Row Shootout" later Sunday for the final three slots in the May 26 race. If the session is rained out, IndyCar will use the next available day to set the final row.

McLaren's new setup for its desperation qualifying run potentially came from another team willing to assist McLaren with its struggle. When asked, McLaren head Zak Brown said only, "This is a friendly paddock. Much friendlier than F1."

McLaren last raced in the Indy 500 in the 1970s but is back this season to both help Alonso complete his quest to win motorsports' version of the Triple Crown and as a feeler for a potential full-time IndyCar team. But the entire process has been a disaster from opening day because of electrical issues, an Alonso accident, a lengthy delay in rebuilding him a car, a tire puncture on his first qualifying attempt, and, finally, a car too difficult to handle for Alonso to qualify it in the top 30 on Saturday.

"Not fun to be down to your final few laps," Brown said.