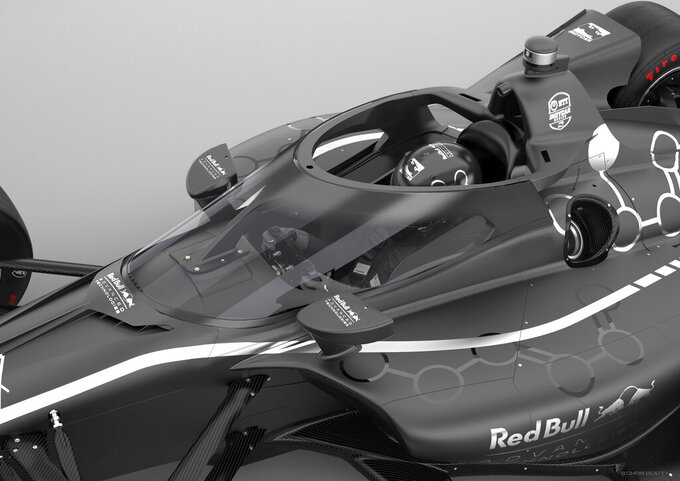 This artists rendering provided by IndyCar shows an IndyCar featuring an aeroscreen (windshield). IndyCar will use an "Aeroscreen" developed by Red Bull Advanced Technologies for cockpit protection beginning next season. The safety piece will cover the cockpit with a ballistic screen anchored by titanium framework. (Chris Beatty/IndyCar via AP)

It's the first time in 15 years that anybody but Ganassi or Team Penske won the event.

Ericsson dumped both powerhouse teams from the competition, beating Penske drivers Josef Newgarden in the quarterfinals and Will Power in the final. He beat Dixon in the first race of the finals, lost the second but had the preferred lane choice for the decider by having the best single run.

Askew took the lead entering the final lap, and it appeared Norman would be able to use the draft to pass for the win. He swung past on the outside along the backstretch and led through the first two turns, and then Norman dived to the inside as he tried to hold Askew off at the line.

Askew went just a bit lower and just a bit faster, winning Friday's race by the width of his front wing for Andretti Autosport. It also gave Askew the lead in the series through seven of 18 races.

Rinus VeeKay was third in a race in which the top five were separated by six-tenths of a second.

Chris Windom and David Malukas walked away from their shredded Indy Lights cars after a frightening crash a few laps into the Freedom 100 on Carb Day at Indianapolis Motor Speedway.

Windom was in a harrowing Silver Crown crash in the Hoosier Hundred on Thursday night and said he was glad to walk away. He was just as fortunate to walk away on Friday, when Malukas lost control at about 200 mph and Windom's car climbed onto a wall and surfed down the front-stretch fencing.

The race had to be red-flagged so that track crews could repair the barrier.

Indy Lights is considered the top feeder series for IndyCar.

Tony Kanaan had the fastest lap during the final practice for the Indianapolis 500, while Team Penske barely managed to crack the top 10 with defending race winner Will Power leading the way.

Chevy led the way behind Kanaan, but the next six cars were carrying Honda power.

Pole sitter Simon Pagenaud was 22nd on the speed chart, though it's hard to distinguish who was in traffic and who was in open air. Pagenaud still sounded confident in his ride for Sunday.

Indianapolis Motor Speedway has announced the creation of the Robin Miller Award, named after the longtime motorsports writer, to honor those dedicated to the service of auto racing.

Miller was given a plaque as its first recipient on Carb Day at the speedway.

Miller, who has had cancer in recent years, was given the award in part to celebrate his five decades at the track. He was joined at the presentation by some of the most famous drivers of his era, including A.J. Foyt, Bobby Unser, Johnny Rutherford and Mario Andretti.

Andretti is celebrating 50 years since his victory in the 1969 race.

IndyCar has announced that it will use an "Aeroscreen" developed by Red Bull Advanced Technologies for cockpit protection beginning next season.

The safety piece will virtually cover the open-air cockpit with a clear screen anchored by and on a titanium framework. Its purpose is to protect drivers from flying debris.

Justin Wilson died in 2015 when a piece of debris struck his helmet during a race at Pocono.

IndyCar has tested various windscreen concepts, including one by PPG Aerospace that drivers used in tests last year. Although the drivers who tested the windscreen did not report any issues, comprehensive testing at PPG's facility in Alabama showed more work was needed before implementation.

IndyCar was able to take that research to give Red Bull additional data and information for development of the current design.

Chris Windom plans to start the Freedom 100 on Carb Day at Indianapolis Motor Speedway after a harrowing silver crown crash on Thursday night during the Hoosier Hundred at Indiana State Fairgrounds.

Windom's car turned sideways on the front stretch and wound up flipping at least six times before it finally came to rest on its wheels. Windom managed to walk away under his own power.

"Very grateful to walk away from that one," Windom said.

The 28-year-old is making his Indy Lights debut in the Freedom 100 for Belardi Auto Racing with support from Jonathan Byrd Racing. The 40-lap race begins after the final practice for the Indy 500.

The annual Carb Day revelry ahead of the 103rd running of the Indianapolis 500 got off to a soggy start as a line of storms rolled over Indianapolis Motor Speedway on Friday.

The speedway even closed its gates briefly as lightning lit up the sky.

The storms were expected to move away quickly, leaving in their wake a hot, humid day for thousands of fans planning to attend the final practice before the Indy 500. Also on deck Friday is the Indy Lights race, the pit stop competition and a concert headlined by Foreigner.

It's been a rainy month of May at Indianapolis, and there is more rain in the forecast for this weekend. Some meteorologists have predicted a 90 percent chance of rain on race day.